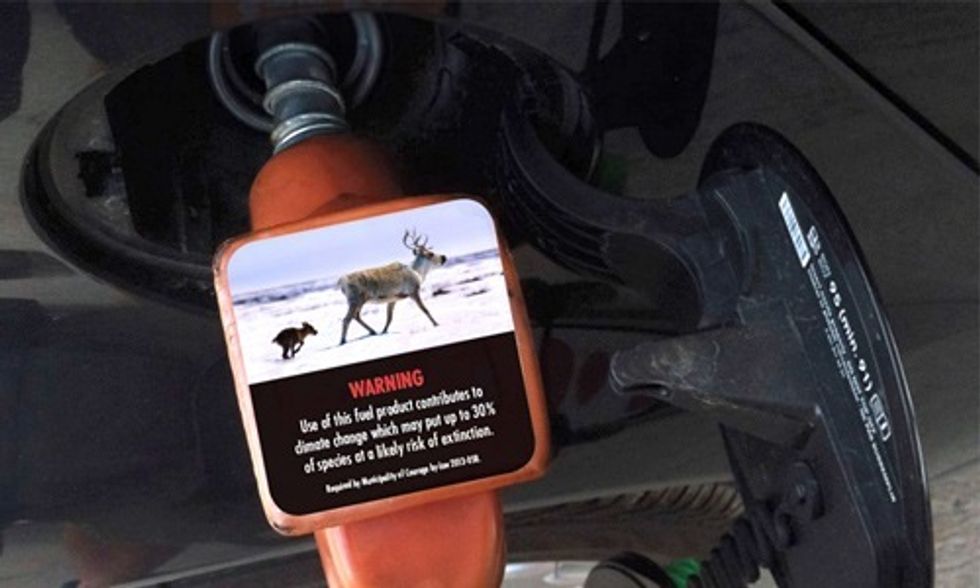 What if every time you fueled up at your local gas station, you were reminded that the world's addiction to oil contributes to climate change? Would it change your habits? The city of North Vancouver, British Columbia is hoping so. The city council voted unanimously earlier this week to approve mandatory climate change labels on gas pumps.

This is one of the warning labels proposed by the nonprofit Our Horizon. Photo credit: Our Horizon

It's a "historic global first," said Rob Shirkey, the founder of the nonprofit Our Horizon which lobbied for the law. He told CBC News that "other Canadian and American cities have come close by supporting similar initiatives, but the city of North Vancouver is the first to make it mandatory." San Francisco, Berkeley and Seattle have all recently considered instituting warning labels.

Passed! Proud to support this initiative in @CityOfNorthVan and further our leadership in #climatechange https://t.co/t7rofGmdCn
— Linda Buchanan (@Linda Buchanan)1447733195.0

The city council still has to approve designs for the stickers, which they are hoping to do by early next year. Once they do, they will require gas pumps to have them as part of a business license. City staff are currently working on pitching ideas for the exact message of the sticker. City officials don't think that residents of North Vancouver are going to just abandon their cars overnight, but they're hoping it will shift the way they think about climate change.

“[The goal] is not to have someone drop the pump and walk away from the vehicle,” Shirkey explained. “We have a habitual automatic downstream behavior—we don’t think about pumping gas. We all say in Canada, ‘shame on Alberta, shame on tar sands,’ but by pointing finger up-stream, we distance ourselves from the problem. We’re providing most of the demand for that product.”

In other words, they're hoping the stickers remind residents of their own complicity in causing climate change and start to change people's behavior. It's important to offer "pragmatic solutions an ordinary person could implement," said North Vancouver Mayor Darrell Mussatto.

"The message is that burning fossil fuels causes climate change and … to add a positive spin, here are some tips when using your automobile on how to make it more fuel efficient," Mussatto added. "I couldn't live without my vehicle, but I can certainly reduce the number of trips I do use it for."

Shirkey cautioned, though, that the city shouldn't "shy away from negative messaging" too much. He said it's been an effective strategy for health warnings on cigarettes. "If it's too positive, which is what the industry is advocating for, then we're avoiding the problem and not addressing the issue of climate change," Shirkey said.

The stickers will cost the city between $3,000 and $5,000 to make. Here are some sample messages from a city staff report:

Our Horizon also offered some ideas: