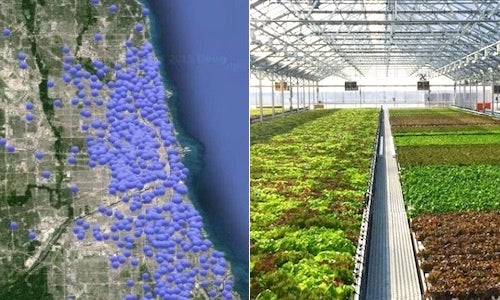 Who knew that the Windy City has become so green? As Co.Exist reported, Chicago is quietly becoming the country’s urban agriculture capital with 821 growing sites across the city, from small community gardens to multimillion dollar indoor farms, according to the Chicago Urban Agriculture Mapping Project. Even O’Hare’s Terminal 3 is home to the world’s first airport aeroponic garden.

Chicago’s “urban farming renaissance” has been led by a burgeoning indoor farm market, Co.Exist writes. This includes FarmedHere, a 90,000-square-foot space in Bedford Park that is not only the first organically-certified indoor vertical aquaponic farm in Illinois, it’s also the largest indoor farm in North America. FarmedHere’s two-story farming facility currently sits on the site of a formerly abandoned warehouse in the outskirts of Chicago.

FarmedHere’s produce is grown in a sustainable environment where 97 percent of fresh water is reused and plants are grown without the use of herbicides or pesticides. The farm’s LED lighting system mimics outdoor conditions, meaning plants don’t need natural sunlight to grow.

EcoWatch previously mentioned how urban farming has really made a comeback in the U.S. in recent years. Cities around the world are developing and expanding their local food systems to create a more sustainable method of food production and distribution, which will become increasingly necessary as cities adapt to climate change.

Projections show that the global vertical farming market is expected reach $3.88 billion by 2020, a figure that Laurell says is lower than what it actually might be.

“The greens market for Chicagoland alone is $400 million dollars,” Laurell said. “Given the market is so big, and it’s so top of mind for people where their food came from and how it was grown, even if only some fraction of that food grew in an indoor environment, when you extrapolate to other cities in the U.S. and abroad, you’d easily reach $4 billion; $4 billion seems light.”

Laurell explained that vertical farming is ideal compared to outdoor agriculture as it produces local food year-round, has a small geographic footprint, a high yield per cubic foot ratio and slashes food miles.

“On the consumer side, there is a large demand for local food, food grown close to the city. People want to know where their food comes from and cut out transportation miles to get more freshness,” he added.

Farmed Here plans to expand to up to 15 cities within the next decade, Laurell said.

Urban Till is another indoor hydroponic farm. Located on the west side of Chicago, the company offers herbs and microgreens to more than 200 clients in the area, the Chicago Tribune reported last year.

CEO Brock Leach told the publication that Urban Till will expand nationally and internationally with its proprietary hydroponics this year.

“We have an intellectual property to produce more water from the air than what we use in the farm at no additional cost of electricity, and we’re able to produce agricultural goods without water supply to do so,” Leach said.

“Our Pullman facility annually grows up to 10 million heads of leafy greens and herbs, year-round, for the finest retailers and restaurants across the greater Chicagoland area,” the venture boasts.

Gotham Greens has three existing greenhouses in New York. “Chicago was a logical expansion because it is a large city—by market the third largest—a cold weather place with a short growing season and a limited supply of year-round local produce,” Viraj Puri, CEO and cofounder of Gotham Greens, told Co.Exist.

“The traditional farmer in Illinois turns a head of lettuce twice a year, every 60 days—maybe a third turn if they’re lucky. We do 25 crop turns per year, and a lot of that has to do with controlling climate, temperature, humidity, light and carbon dioxide,” Puri added.