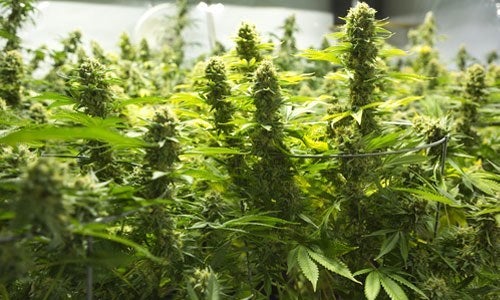 Roughly 72 million gallons of water were used to irrigate illegal pot farms in San Diego County. That could serve 440 families for a year, according to law enforcement officials.

Last week, officials from the Drug Enforcement Administration (DEA) announced at a news conference at the agency’s San Diego office that they shut down 38 indoor and 60 outdoor pot operations in the county so far this year, seizing 88,213 plants. Of those, 52,439 plants were removed from public lands. According to the officials, most of the farms used stolen water or water diverted from natural sources.

“During this time of drought, San Diegans should be concerned that our water is being stolen for a criminal enterprise,” said the DEA. The agency estimates it takes approximately 900 gallons of water to bring an outdoor marijuana plant to harvest, and 450 gallons for a plant grown indoors.

“With the ongoing drought here in California, we’re all aware of how important it is to conserve water … but what most people don’t realize is how much water is used to grow a marijuana plant and that most of that water is stolen,” DEA Assistant Special Agent in Charge Gary Hill told the San Diego Tribune.

“Had these marijuana plants been seized from our district, at our current rates for water and pumping, 220 AF of theft would represent $420,000 in lost water and pumping revenue, which has to be made up by our other customers,” said Arant.

The number of plant seizures is down slightly compared to this time last year, but arrests and seizures remain relatively high.

Here is data from the DEA (via the Tribune) for the last three years:

The DEA’s findings are just the latest criticism of pot farms’ impacts. Pot farms in Northern California have been blamed for killing wildlife, including rare species. According to a report last year by NPR, growers plant their marijuana in remote locations, hoping to elude detection. The growers use rodenticide to kill the thirsty rodents that often chew on the flourishing, moist plants. Other animals, who prey on the poisoned rodents, become weakened or die, as well.

And just last month, researchers at the University of California released a study indicating that rat poisons increasingly pose a significant risk for California’s imperiled Pacific fishers, small forest-dwelling mammals that are protected under the California Endangered Species Act.

Pot farmers have also come under fire for using dangerous pesticides and having a high carbon footprint. But some in the industry have responded by developing the equivalent of an organic standard for weed (it can’t be certified organic even in states where it’s legal because it’s still illegal at the federal level). And many in the industry are working to reduce their operations’ impact.

Presidential candidate Bernie Sanders came out in favor of legalization in October and filed a Senate bill last month that would allow states to decide whether to legalize recreational use of marijuana and decriminalize the drug at the federal level.

Largest Desalination Plant in Western Hemisphere Opens: Will It Fix the Drought?