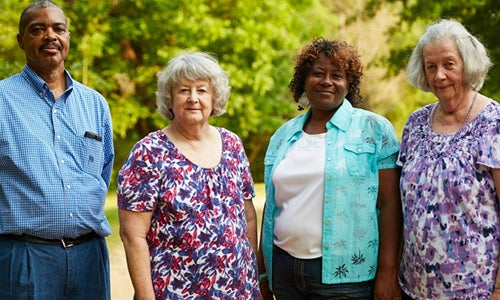 After being sued for $30 million by a corporate landfill owner for “speaking their truth in order to protect their community,” four residents of Uniontown, Alabama—a poor, predominantly Black town with a median per capita income of around $8,000—are fighting back. 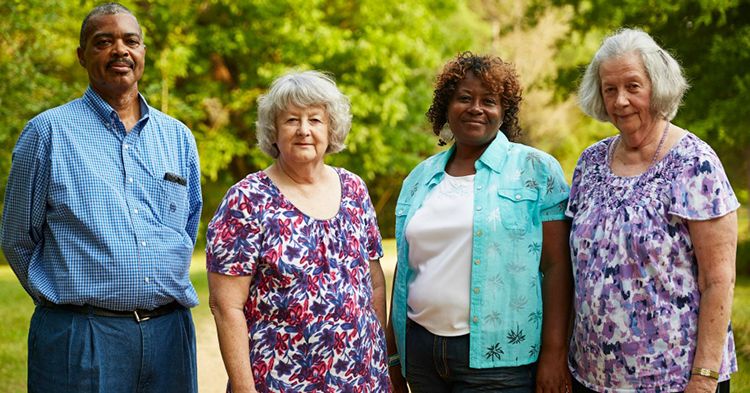 L-R, Benjamin Eaton, Mary B. Schaeffer, Esther Calhoun and Ellis B. Long were sued by a corporate landfill owner for $30 million after speaking out against the hazardous dump on Facebook. Photo credit: ACLU

On Thursday, the American Civil Liberties Union (ACLU) asked a federal court to dismiss the defamation lawsuit against Esther Calhoun, Benjamin Eaton, Ellis B. Long and Mary B. Schaeffer—all members of the community group Black Belt Citizens Fighting for Health and Justice.

The defendants are being sued by Georgia-based Green Group Holdings for speaking out against the polluting, hazardous coal ash that the company keeps in a landfill in a residential area—a “sprawling dump” that stands as a symbol of racial and environmental injustice.

The lawsuit alleges that the Black Belt group used its web site and Facebook page “in a false and malicious manner,” and that the group’s president Esther Calhoun and vice president Benjamin Eaton made “knowingly false” statements to the media.

“The lawsuit focuses on comments made by visitors to the group’s Facebook page relating to controversies over the landfill’s activities near an old cemetery and accusations that the facility is polluting the community and oppressing local residents,” Sue Sturgis wrote in April for Facing South.

Among the comments the lawsuit calls “false and defamatory” are these remarks by the group’s president, Calhoun (the bold text is the Green Group Holdings’ own, showing what the company objects to):

Its a landfill, its a tall mountain of coal ash and it has affected us. It affected our everyday life. It really has done a lot to our freedom. Its another impact of slavery. … Cause we are in a black residence, things change? And you can’t walk outside. And you can not breathe. I mean, you are in like prison. I mean, its like all your freedom is gone. As a black woman, our voices are not heard. EPA [Environmental Protection Agency] hasn’t listened and [Alabama Department of Environmental Management] has not listened. Whether you are white or black, rich or poor, it should still matter and we all should have the right to clean air and clean water. I want to see EPA do their job.

In its filing on Thursday, the ACLU argues that the lawsuit “involves speech at the very core of the First Amendment,” said Lee Rowland, senior staff attorney with the ACLU’s Speech, Privacy and Technology Project.

“No one should have to face a multimillion-dollar federal lawsuit just for engaging in heartfelt community advocacy,” Rowland said. “All Americans have a right to speak out against hazardous substances being dumped in their home towns and the Constitution prevents companies from using lawsuits to silence their critics.”

The ACLU reports that before filing the defamation suit, a lawyer for Green Group Holdings provided the defendants with a list of demands in exchange for not suing.

That so-called “settlement proposal” would have required a full apology from each defendant; access to the group’s future social media postings; and extensive details about Black Belt Citizens’ membership, advocacy and communications with other environmental groups, among other things. The proposal also would have required each of the defendants to withdraw as complainants in a federal civil rights complaint filed with the EPA.

The defendants scoffed at the offer.

“Not only have Black people been expected to endure this kind of systematic racial and environmental injustice throughout our nation’s history, they are expected to bear it silently or be subjected to harsh consequences just for advocating for their health and community,” said Dennis Parker, director of the ACLU’s Racial Justice Program. “We want to ensure that our clients don’t have to face that choice in Uniontown.”

Indeed, said Calhoun on Thursday: “State officials would never have allowed the landfill to be here if we were a rich, white neighborhood. They put it here because we’re a poor, Black community and they thought we wouldn’t fight back. But we are fighting back and we’re not afraid to make our voices heard.”