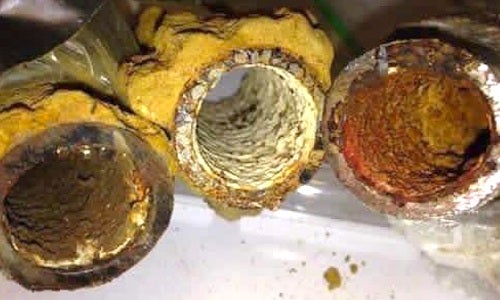 On Wednesday night, in a special edition of The Rachel Maddow Show, Maddow hosted a town hall meeting inside the Brownwell/Holmes STEM Academy, one of three Flint, Michigan, schools where the water inside was polluted well beyond the federal limit.

This is what the untreated Flint River did to pipes. #FlintTownHall @maddow pic.twitter.com/HUF1im3DvO

While Flint’s water crisis has been well documented, Maddow said many may not know that the problem isn’t actually fixed yet. “Months after this problem was first acknowledged, and weeks after the state declared a disaster, the damaged pipes of Flint are still in the ground,” Maddow said. “The water is still undrinkable, and there’s no timetable for when the pipes will be replaced and the issue rectified.”

While the city has stopped getting its water from the corrosive Flint River and has restored its connection to Detroit’s water system, which comes from Lake Huron, “the damage is done to all of the pipes and that is why you still cannot drink the water here,” Maddow says in the video below.

Over the course of the evening, Maddow hosted a number of experts, including Flint Mayor Karen Weaver; Dr. Mona Hanna-Attisha, a pediatrician at Hurley Medical Center in Flint, who was the first to confirm the elevated lead levels in Flint’s children; Marc Edwards, a professor of engineering at Virginia Tech University who detailed the issue alongside University of Michigan professor Martin Kaufman; Michigan Sen. Debbie Stabenow; and Reverend Charles William III, a member of the civil rights organization National Action Network.

“Our trust has been broken in the city of Flint,” Weaver said, “and until we get safe pipes people are not going to trust the water.”

Lead is an “irreversible neurotoxin,” Hanna-Attisha explained. “Every kid in Flint is at risk,” she said, “but there are things that we can do” to mitigate the impact of lead, especially in children. She advocated for a “whole child approach” built on a healthy diet and top notch education to, as she put it, “take these lemons and make lemonade.”

As for fixing the pipes, that could be a slow process, Edwards explained. “What we’re struggling with here is that there is really no precedent for this kind of man-made disaster,” Edwards told the audience.

He’s working with fellow professor Kaufman to identify where the lead pipes are. “The pipes will have to be addressed in stages,” MSNBC explained. “In the short term, they’ll need to be re-coated with a film to hold in the lead. In the long term, the only fix is ripping them out—every mile of them. No American city has ever done it.”

There is plenty of finger-pointing going around, but one thing many people agree on is that Michigan Gov. Rick Snyder should resign. “All I got to say, is Governor Snyder got to go,” Williams said. “I would have been fired a long time ago.”

Actor and activist Matt Damon and Sen. Bernie Sanders (I-VT) have also called for his resignation. Filmmaker and activist Michael Moore and singer Cher have even said Snyder should be imprisoned.

Watch Maddow and a panel of experts discuss the contributing factors that led to Flint’s water crisis, and what state and federal authorities must do to help city residents:

Replacing the pipes could cost more than the homes are worth, Harold Harrington, a master plumber based in Flint, told Maddow. Watch Harrington explain to Maddow the financial challenges involved in fixing Flint’s water problem:

Lastly, NBC News’ Stephanie Gosk reports on how lead poisoning has taken a catastrophic toll on Flint’s children, and Maddow discusses the dearth of resources in Flint for the city’s children, and how to solve that problem: