These 13 People Could Become 'Britain’s First Ever Climate Prisoners' 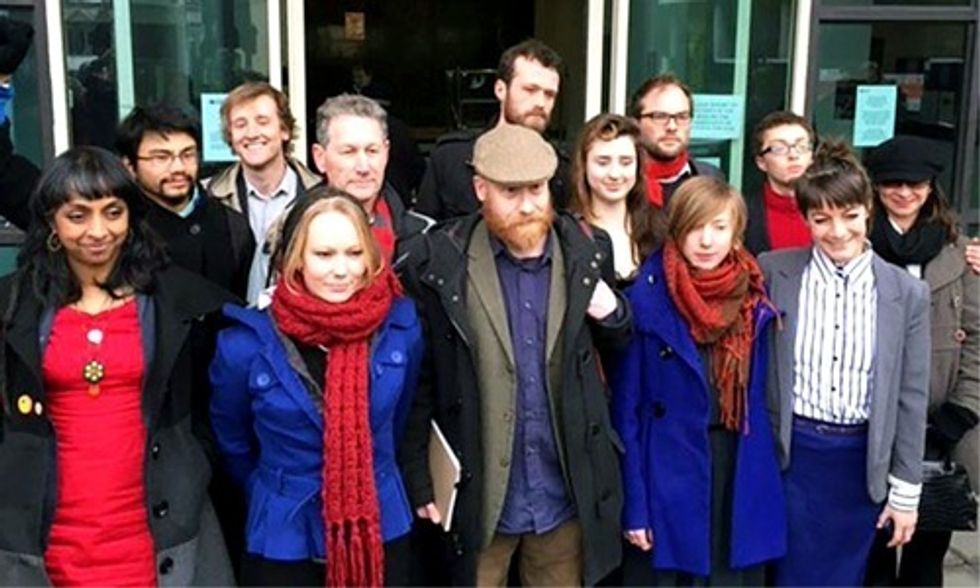 Later this month, a judge in the UK is set to jail 13 non-violent protestors who occupied one of the runways at London Heathrow in July last year.

The protest, the first ever on a Heathrow runway, lasted six hours and caused the delay or cancellation of some 25 flights.

A judge in the UK is set to jail 13 non-violent protestors who occupied one of the runways at London Heathrow in July last year.

It was carried out by activists from Plane Stupid, who are opposed to airport expansion.

In their trial last month the activists—known as the Heathrow 13—tried to argue the “necessity defense” in that their actions were necessary due to the “airport’s contribution to life-threatening climate change.”

It is the same defense that the so-called Delta 5 used recently in the U.S. after they blocked a crude by oil terminal in Washington State.

But whereas the judge in the Delta 5 trial praised the defendants for being “part of the solution to the problem of climate change” and “quite frankly, the kind of tireless advocates we need in this country,” the judge in the Heathrow 13 trial sees it very differently.

At the end of last month, the judge convicted the 13 of aggravated trespass and being airside without lawful authority. She asked them to return in three weeks on Feb. 24 for sentencing. The defendants have been told to prepare for immediate custodial sentences.

They could spend up to three months in prison.

In response to their convictions, the Heathrow 13 issued a statement:

“Today’s judgement demonstrates that the legal system does not yet recognize that climate defense is not an offense. We took action because we saw that it was sorely needed. When the democratic, legislative and processes have failed, it takes the actions of ordinary people to change them.”

There is now a growing campaign to urge the judge to reconsider: Today’s Independent newspaper reports how the judge is being “urged not to act on her threat to jail 13 peaceful environmental protesters—as campaigners warn that the British legal system’s long-standing tolerance towards non-violent direct action is under threat.”

The article points out that if the “Heathrow 13” are jailed, it would be the first time peaceful environmental protesters have gone to prison for the offense of aggravated trespass since the law was passed two decades ago.

The oldest of the Heathrow 13 is Dr. Rob Basto, a retired atmospheric physicist. He admits to being “apprehensive” about jail, “because of my family situation. My mother is ill and she’s 94.”

Another protestor, Danielle Pafford, 28, said she was shocked “by the judge’s comments. It was really galling to hear her say she understands the serious impact of climate change—but that we made some people late and that’s unacceptable.”

It is no surprise that many of them are being represented by Mike Schwarz, a lawyer from Bindmans, who tells the Independent: “A custodial sentence would be excessive and wrong because there is a long history of recognition by senior judges that an allowance should be made on sentencing for peaceful protests of public importance.”

Schwarz has often represented those fighting for a just and ecologically sustainable future.

More than 20 years ago, I interviewed Schwarz for the book, Green Backlash. He was then worried about how the government and establishment were clamping down on people protesting against road building.

He warned that the British Government was “trying to kill the messenger, rather than address the real issues. This is very worrying, because it is a blinkered way of dealing with issues.”

We cannot carry on building airports and expanding aircraft travel is we are going to address climate change.

As Leo Murray, one of the co-founders of Plane Stupid, points out: “If a third runway is built at Heathrow we will have no hope of meeting our legally binding carbon targets.”

Murray adds that if the judge does jail the Heathrow 13, they will be “Britain’s first ever climate prisoners.”

If you are concerned about this, there is a petition which can be signed here.