The Yes Men Want to be Sued by the U.S. Chamber of Commerce 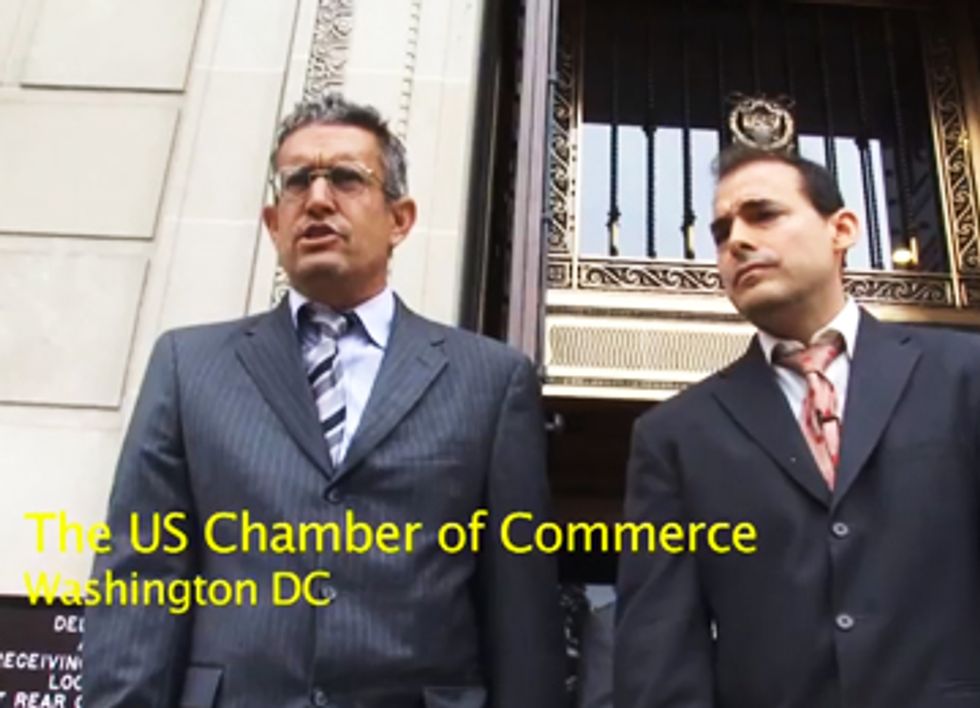 Shenanigans at the front door of the U.S. Chamber of Commerce yesterday reveal that the Chamber has dropped its lawsuit against The Yes Men, the activist duo famous for their elaborate prime-time pranks against Dow Chemical, Chevron, World Trade Organization and other giant entities known for putting their profit margins before people and the planet.

The Yes Men went to the Chamber yesterday morning in attempts to convince the business front group not to drop the lawsuit. Here’s some footage of the announcement and confusion over who does and doesn’t work for the Chamber:

That’s right. The Yes Men want to be sued by the U.S. Chamber of Commerce. According to their press release:

“Just as their case against us was finally heating up again, the Chamber decided to drop it,” said former defendant Andy Bichlbaum of The Yes Men. “The Chamber knew this was our chance to challenge their silly claims and, since they claimed we had ‘damaged’ them, investigate the details of their finances through the discovery process. It’s the height of rudeness to deprive us of this great opportunity."

“The Chamber’s lawsuit represented the only time in 17 years that anyone has been stupid enough to sue us,” said former defendant Mike Bonanno. “This was the chance of a lifetime, and we profoundly deplore the Chamber’s about-face.”

Apparently, revenge isn’t a strong enough reason for the Chamber to to cough up information on their secret financial backers or their obstruction on solving the critical issue of global climate change, the issue which sparked the original Yes Men parody press event and ensuing lawsuit.

The Chamber sued The Yes Men in 2009 for holding a press conference at the National Press Club on the Chamber’s behalf, announcing a reversal on the Chamber’s efforts to block climate change legislation. The false event was interrupted by an actual Chamber official named Eric Wohlschlegal, who told attending press, “This guy is a fake! He’s lying!” See this video:

The stunt threw the Chamber off balance as it had to clarify it would not stop obstructing national climate change policy. The following lawsuit was unprecedented for Yes Men hijinks. Even Dow Chemical didn’t sue them, despite losing $2 billion worth of stock when Yes Man Andy Bichlbaum posed as a Dow official on a live BBC interview and took responsibility for the Bhopal chemical disaster—which Dow still won’t own up to despite the death of 20,000 people).

Yes Lab has a summary of the announcement at the Chamber’s front steps in Washington, DC, including a list of questions The Yes Men wish the lawsuit’s discovery process could have answered:

Some of the things we could have asked in court had they not withdrawn their lawsuit:

PolluterWatch has more on the U.S. Chamber of Commerce and its anti-environmental practices.