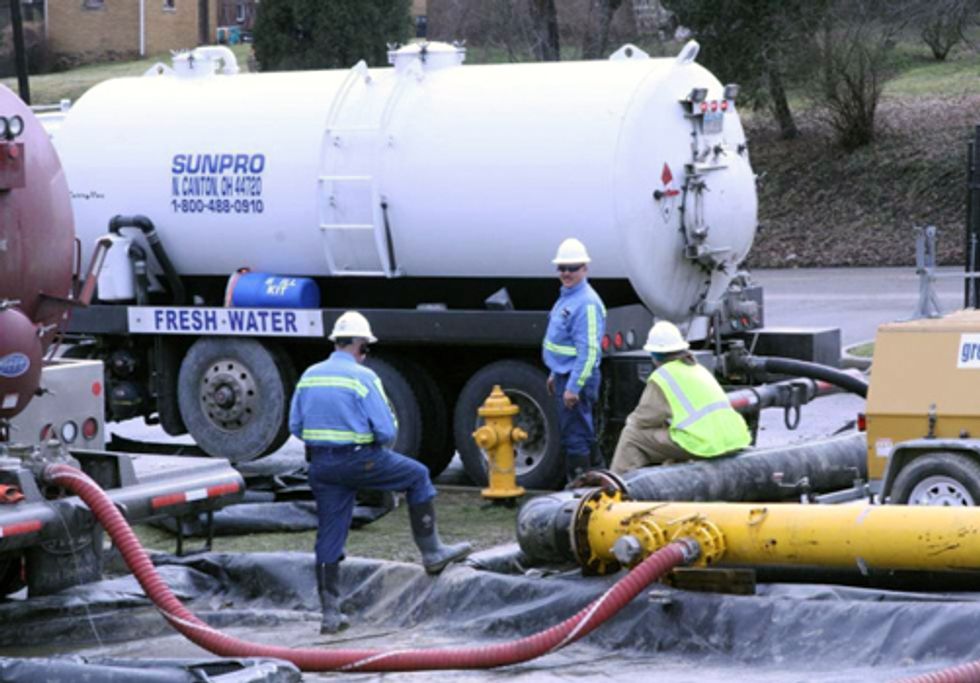 Delaware Riverkeeper and Protecting Our Waters

Workers siphon water from a Steubenville city reservoir under an agreement with Chesapeake Energy. The drilling company is buying city water to frack Utica shale wells. Photo courtesy of Franciscan University of Steubenville.

Recent studies examining potable water supplies on a global scale, the current trends in American water consumption and the causes of depletion of this essential resource are helping us to understand that the footprint of shale gas development expands indefinitely when measured in water.

Considering that only 1 percent of the earth’s water is drinkable, how we manage water will define our future and the future of the planet. Since 99 percent of that water is groundwater[1], how we look after our aquifers is the most critical component involved.

Examining the demand for water worldwide, a report published in August in Nature concludes that we are overexploiting our aquifers, estimating that the global groundwater footprint is about 3.5 times the actual size of aquifers where almost one quarter of the world’s population lives (1.7 billion people).[2]  Comparing the rate of groundwater withdrawal to aquifer recharge, the report warns that the way we are using water in these stressed regions is not sustainable.

Of the seven nations where the groundwater footprint is greatest, the U.S. is one of the fastest speeding towards disaster. According to Cynthia Barnett’s Blue Revolution, scientists say the 20th century was the wettest in a thousand years and now drier times are ahead.[3]  This means that many of the management schemes we use now—based on 20th C planning—need to be changed to avoid catastrophe. So the 410 billion gallons of water America uses every day will suck the nation dry if we don’t stop over-tapping nearly every river and aquifer.

The biggest U.S. users are power plants and agriculture with private and public utilities next, supplying the average 147 gallons per person per day that Americans use (four times more than we each used in 1950), far greater than the 33 gallons the Dutch use per capita and the 5 gallons per day used by people in many impoverished nations. Scientists say America’s High Plains and Floridan Aquifers, both enormous and water-rich, are being used faster than they can recharge—Florida can no longer fill its state’s drinking water needs and Lake Mead behind the Hoover Dam on the Colorado River has a 50-50 chance of going dry by 2021.[4]

And yet little is being done about runaway consumption and out of date planning.  An article in the Harvard Business School’s Working Knowledge points out that by 2050, the Earth’s population will likely exceed 9 billion people, many expected to live in cities yet in terms of urban planning, “Water is often planned last and gets short shrift,” said John Briscoe, a professor at the Harvard School of Engineering and Applied Sciences, who participated in a panel a session dedicated to water. "Water is absolutely the poor cousin of the utilities.”[5]

Water Consumed:  Fracking is a water intensive process requiring an average 5 million gallons of water per well and up to 9 million gallons for some of the longest well bores.  Between 8-10 percent of the volume injected in Pennsylvania’s Marcellus Shale wells returns to the surface as flowback. That means up to 90 percent of the fresh water injected in the fracking process is sequestered in deep geologic formations.

This depletion is fundamentally different than evaporative losses for agriculture, electricity generation, and recreational uses like golf courses, which essentially recycle the water used into the atmosphere where it returns as precipitation. Water injected for fracking is locked away from the earth’s natural hydrologic cycle, a total loss that doesn’t return to its source.

The ecological and socio-economic implications of this true consumptive loss have not been studied or quantified, but considering the finite nature of potable water and our expanding consumption rate, this must be recognized by water managers as a key in assessing fracking’s water footprint and setting gas extraction policies. Very little data exists to quantify groundwater in many aquifers so that accurate water footprint accounting is difficult to develop.[6]  And yet the trajectory we are on must be exposed in order to change course so we have to gather that data and do the needed analyses.

Water Polluted: The other way fresh water is depleted is through pollution. Frack water is deliberately polluted by the addition of frack chemicals and inadvertently but inescapably contaminated by contact with naturally occurring highly toxic pollutants where the shale gas is contained. Chemical additives make up to 2 percent of the frack fluid injected in gas extraction.[7] Up to 750 chemicals have been used across the nation in frack fluids[8]; in Pennsylvania and West Virginia 322 unique chemicals and at least another 21 additional compounds whose ingredients are kept secret by drillers have been documented in frack fluids used in the Marcellus Shale.[9] Many of these chemical additives are toxic and are known carcinogens and endocrine disruptors; long term exposure can cause nervous system, respiratory and organ damage.  Some, such as benzene, are so dangerous that even miniscule amounts can cause disease.[10]

But even if only benign additives were used for fracking, the water that returns to the surface is highly toxic, polluted with materials found in the shale formations[11]. Many of these materials, including sodium, chloride, bromide, arsenic, barium and naturally occurring radioactive materials (NORM)[12] are found at levels that exceed safe drinking water standards. Radioactivity in Marcellus Shale wastewater is higher than in non-Marcellus formations and positively correlates with Total Dissolved Solids, showing very high salinities.[13]  Radionuclides have been flagged as problematic in Pennsylvania frack wastewater by the U.S. Environmental Protection Agency[14] and sampling by New York State revealed several radionuclides, including radium 226[15], the longest lived isotope of radium with a half-life of 1600 years. Radium 226 can cause lymphoma, bone cancer and blood formation diseases such as leukemia and plastic anemia.  Radon is the radioactive decay product of radium; it is an extremely dangerous gas and is the second leading cause of lung cancer in the United States.[16]

A recent report by the U.S. General Accountability Office concludes that the water produced by shale fracking poses health risks to humans and the environment.[17] A Risk Analysis released in August of this year concluded that five main contamination pathways for frack fluids exist and even in a best-case scenario, an individual well would potentially release at least 200 cubic meters of contaminated[18] fluids (cubic meter= ~264.17 fluid gallons).[19] Multiplied by the 100,000 new shale gas wells that the U.S. Dept. of Energy says can be expected nationally and it is quickly evident that lots of water will be contaminated by fracking, depleting clean water resources—at least 5 billion gallons using these estimates.

Looking locally, the numbers are more startling. Consider the compact geography where pollutants would be released and water would be withdrawn: Pennsylvania predicts 50,000 new gas wells, New York predicts 40,000. The Delaware River Basin alone may range between 32,000 and 64,000 new gas wells drilled. The Delaware River Watershed is already supplying 17 million people with water, one of the largest water supply watersheds in the mid-Atlantic even though it is a relatively small watershed (~13,000 sq. miles).  How will this demand continue to be met if the currently high quality water is degraded and depleted?

It doesn’t end there. Much of the disposal of frack wastewater in Pennsylvania is still going to surface waters according to a report from a New York university[20], spreading the pollution even farther because many of the pollutants in the wastewater are not removed. Frack wastewater processed by municipal wastewater treatment systems could be categorized as “nontreatment” because these systems are not designed to clean this waste.[21] In Ohio, permanent damage caused by earthquakes induced by injection of frack wastewater have led to a moratorium on re-injection near Youngstown, but the irreversible pollution of groundwater resources there is still under study. And findings by hydrogeologists Paul Rubin[22], Tom Myers[23] and Cornell Professor Tony Ingraffea have verified that gas wells can and do leak, some immediately, some in a few years’ time.  Paul Rubin makes it clear that eventually all gas wells being constructed today will leak methane and/or polluted fluids into aquifers, assuring the loss and degradation of irreplaceable water in untold volumes.[24] That’s unending loss, a suffocating footprint that cannot be undone and that deprives generations to come.

As clean water is contaminated, it loses its place in the natural healthy systems within which it functions, depleting the resource, expanding shale gas’ water footprint. Here in the Delaware River Watershed, water supplies contribute 3.82 billion dollars in annual value to the regional economy and water quality brings $2.5M in annual economic benefit to the Basin, according to a study out of the University of Delaware.[25] When water is polluted, it costs to clean it up to drinking water standards, reducing its value, bringing real economic burdens.

Our vanishing water supplies will limit shale gas extraction because the water footprint will become so enormous that it just can’t be sustained. But the point when the profligate use of fresh water becomes unacceptable can be sooner rather than later if the impacts of water depletion by shale gas development are made clear and policies are adopted to prevent degradation. These recent scientific reports show us how to do that assessment so that disaster can be averted—if the world can agree that we cannot sacrifice our water for gas.

The Shale Gas Outrage Steering Committee states, “Shale gas development contaminates our communities, harming human health and living ecosystems. It despoils our natural resources and distracts us from taking the immediate steps essential to curbing climate change. Building a thriving economy requires us to create green jobs, develop sustainable energy, and ensure a healthy environment. Therefore, we are committed to stopping fracking now, including maintaining and expanding each moratorium already established. We are also committed to fighting for justice in place of the unacceptable and unequal burdens imposed by the shale gas industry upon vulnerable populations and future generations.”

[18] “contaminated” is defined as potentially exceeding the limits of the U.S. Clean Water Act or Safe Drinking Water Act.