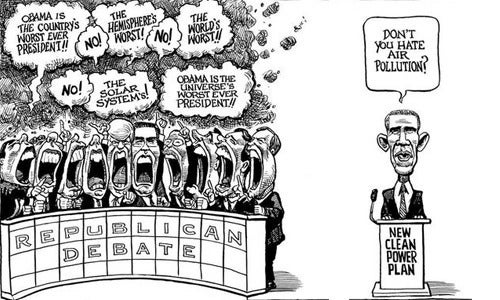 The media missed the real story on the Obama Clean Power Plan (CPP). Most outlets, like the New York Times, hail it as a ground-breaking major new initiative, which “could lead to the closing of hundreds of polluting coal-fired power plants, freeze future construction of such plants and lead to an explosion in production of wind and solar energy,” while Republicans blasted it as a huge example of Presidential hubris—precisely because it would accomplish those goals.

Political insiders like Politico and Slate claim it isn’t such a big deal. And at first blush the numbers seem to support the skeptics.

The new rule will require reductions in carbon pollution from the power sector by 770 million tons—32 percent against a 2005 baseline. But by the end of 2014 utilities had already cleaned up 350 million tons, and emissions were cut by another 15 percent in the first four months of 2015. As of last week power companies had also announced the future shut-down of additional plants which should lead to another 120 million tons—for a pre-CPP rule total of more than 470 out of the 770 million. So most of the cuts required have already taken place or been announced. Even Kentucky, the state whose Senior Sen. Mitch McConnell, seems willing to restart the Civil War over the U.S. Environmental Protection Agency (EPA) regulations, was already retiring or had retired 14 coal boilers—and these retirements will provide most of the emission cuts required under the CPP. What’s the big deal?

It’s true that the announcement of the final version of the CPP is more in the nature of a mopping up operation than the initial invasion of Normandy. But armies engage in mopping up operations only after they secure victory, and the CPP did not spring like Venus from the brow of President Obama last week—there’s a long history here. The CPP is the keystone of one of the most dramatic and fundamental economic restructurings in history.

To understand what’s happened, look back to the summer of 2008. Coal was generating more than half of U.S. electricity, Peabody stock was headed towards $84.05/share, up two-fold since its 2001 IPO. Export coal from Australia was selling for close to $200/ton on the back of Chinese demand. The U.S. utilities had proposed to add 150 new coal fired power plants to the 500 coal boilers the country already relied upon.

President George Bush had declared “clean coal” the key to American “energy independence” and had designated the 150 new coal plants as the key ingredient in the nation’s energy strategy.

Now look. As the New York Timesheadlined this week, “King Coal, Long Besieged, Is Deposed by the Market.” In April, coal generated only 30 percent of U.S. electricity (less than gas). By August two of the nation’s biggest coal companies, Alpha and Murray had declared bankruptcy. Peabody stock closed at $1.10, and rumors of bankruptcy circulated widely. Indeed for the past three years one U.S. coal company announced for bankruptcy every month.

Asian coal prices had fallen to $62.86, and one sixth of Australia’s coal fields were in the red, with the Isaac Plains mine fire-selling for $1 after being valued at $624 million only three years ago. In the U.S., not only had 90 percent of those 150 new coal plants being proposed in 2008 been cancelled, but 200 of the 500 legacy plants in operating in 2008 had either closed down or had their shuttering dates announced. Brand new German coal generation facilities were being sold for one hundred Euros.

So in seven years the fuel that launched the industrial revolution went from the height of its magnificence to a tottering finale. How did it happen, and what is the role of the Clean Power Plant rule in the saga?