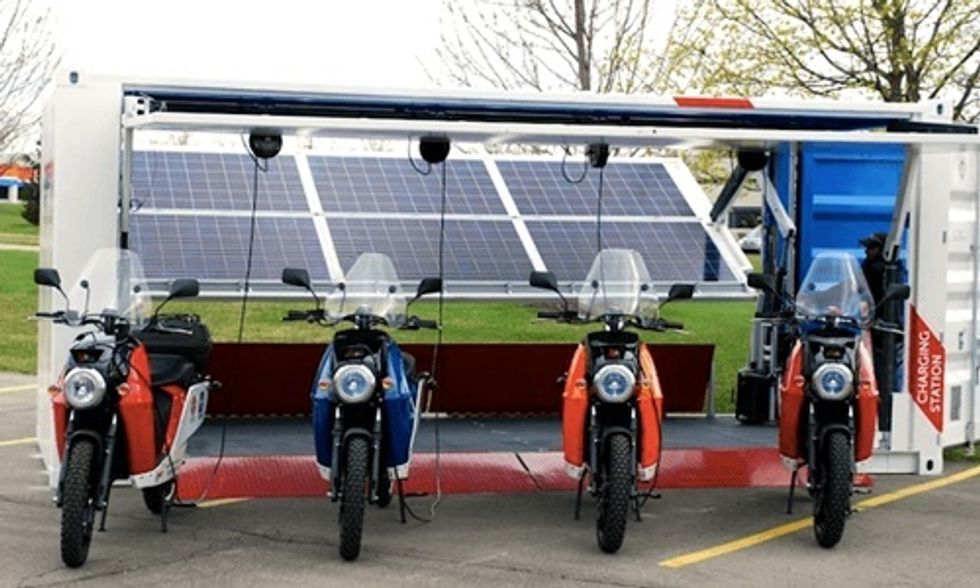 The patent-pending Nb Solar Charging Station is shaped like your standard ISO shipping container. On board is a 22-kilowatt-hour battery and an array of solar panels that can generate up to 2.4 kilowatts (kW) of renewable energy over 24 hours.

The stations provide 8 kW of 120/220 AC power from five charging ports, and come equipped with on board GPS, custom telemetry and radio communications. It can also be customized for commercial applications.

As for the bike, the company's Nb Electric Cargo Motorcycle is powered by 24 70Ah Lithium Ion Manganese Phosphate batteries and has a top speed of 70 mph. Made with high strength niobium micro-alloyed steel, the bike can carry up to 450 lbs., has no belts or gears and can go up to 50 miles per charge. The company says that four of these motorcycles can be fully charged in 5 hours by the Nb Solar Charging Station.

Besides simple transportation, the product is ideal for emergency situations or natural disasters when fossil fuels or power sources aren't readily available. According to Xconomy, "the intended customers are those in the developing world where fuel is expensive or hard to come by, remote mining operations, large global manufacturers, the military, and medical or rescue operations."

Current Motor, which makes all of its products in Michigan, also won the 2015 Michigan MobiPrize in October 2015. Jurors awarded the product for "[providing] an energy independent solution that improves access to remote locations, provides first responder support and helps the mining sector have more sustainable operations."

Current Motor is backed by early stage angel fund BELLE Capital, the State of Michigan and other private equity investors, and has raised $3.4 million to date, Xconomy reported.

When you're riding on sunshine that means no gasoline costs. Photo credit: Current Motor

“It’s a green solution that literally works out of the box,” Flanagan, who is also co-managing director at BELLE Capital told Xconomy.

“The doors of the shipping container open almost like flower petals, with the solar panels on the inside,” Flanagan said. “You leave it open during the day to charge the batteries and close it up at night. When it’s fully open, it has a 22-foot wing span. It’s also very mobile—you can put it on a ship, truck, or helicopter and easily move it from place to place.”

It's unclear when we'll actually see the product on the market but Flanagan told Xconomy that the company will accelerate its commercialization efforts and plans to raise more capital to expand its sales team. They have “big customers” in Brazil and China already, she added.

Check out the video below to see the charging station and bikes in action.