The Twelve Days of Invasive Species in the Great Lakes 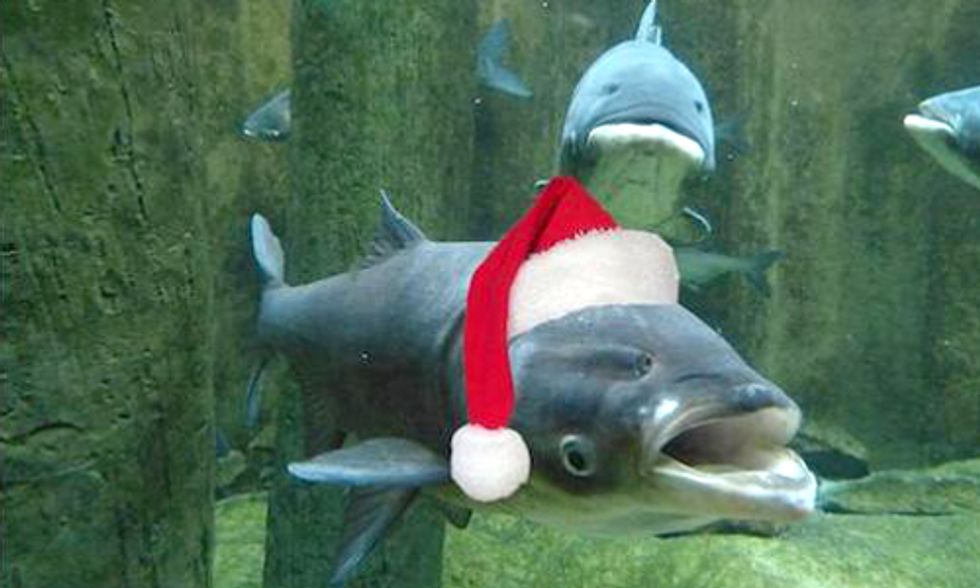 ‘Tis the season to spread some holiday cheer, and of course, ‘tis always the season to spread aquatic invasive species (AIS) awareness. With some inspiration from Al House, one of our advisory committee members, I put together an AIS version of the classic “The Twelve Days of Christmas.” Enjoy not only the song, but some commentary from yours truly!

On the twelfth day of Christmas, a canal brought to me: Canals have been a significant source of invasive species into the Great Lakes region. Canals can be an invasion pathway by opening previously unavailable habitat to a species (e.g. alewives, lamprey) or by allowing ships with AIS in their ballast to enter the Great Lakes (e.g. quagga mussels, spiny water flea). In fact, the pathway into the Great Lakes region for nearly all of the invasive species in this jingle can be easily tied to a canal. The only exception is the red swamp crayfish; it likely made its way into Wisconsin via an aquarium release.

Twelve quaggas clogging—Quagga mussels are now the dominant invasive mussel in Lake Michigan. A congener (a member of the same genus) of zebra mussels, the quagga mussel can tolerate colder water and colonize soft substrates. These abilities have helped it colonize most of the benthic habitat in Lake Michigan. Just like zebra mussels, quagga mussels are quite effective at clogging water intake pipes and other infrastructure. Mitigating these impacts has cost Great Lakes residents millions of dollars.

Eleven gobies gobbling—The round goby is very fond of fish eggs. It is a known predator of lake sturgeon and lake trout eggs, and a swarm of round gobies can decimate a smallmouth bass nest. They can also consume zebra and quagga mussels which can cause toxins to move up the food chain, or bioaccumulate. The best ways to prevent future inland round goby invasions is to not use round goby as bait and to not move live fish. This will keep the goby’s gobbling ways from spreading to interior lakes.

Ten alewives dying—Alewives are one of the few invasive species that foul Great Lake’s beaches throughout the summer. Until the introduction of Pacific salmon, alewives died off in such great numbers that tractors were required to remove them from beaches. Salmon now do a great job controlling alewife numbers, but there are still alewife die-offs due to spawning and temperature related stresses.

Nine eggs in resting—The spiny waterflea and the fishhook waterflea produce tiny resting eggs that can survive extreme environmental conditions, so it is imperative to make sure that recreational equipment is cleaned to prevent spreading these invasive crustaceans. Luckily, their Wisconsin distribution is currently limited to Lake Michigan, Lake Superior, the Madison Lakes and a few other inland lakes.

Eight shrimp ‘a swarming—The bloody red shrimp is one of the Great Lakes more recently discovered ballast invaders. Bloody red shrimp swarms can be incredibly abundant, with swarms up to 1,500 individuals per square meter being documented. Their effects on the Great Lakes are largely unknown, but they may compete for food with young fish, and have been found in the diet of some fish in the Great Lakes. Regardless of the impacts, eight shrimp ‘a swarming is a huge underestimate.

Seven carp and counting—There are seven species of non-native carp in the U.S. There are the four collectively known as Asian carp (black, grass, silver and bighead), the common carp, the crucian carp and last but not least, the Prussian carp (a wild version of the goldfish). While the current focus is on the silver and bighead carp, all of these carp cause problems one way or another. Hopefully we won’t actually be counting any other carp species soon.

Six lamprey leaping—This is some bad lamprey biology humor. Lampreys are actually poor jumpers, especially when compared to trout and salmon, so a small low-head obstacle or ledge can prevent lampreys from moving further upstream while other fish leap over the obstacle. Thus, physical barriers are one way managers are preventing lampreys from invading more streams in the Great Lakes basin.

Four white perch on ice—Icing your catch is another way fishermen can help prevent the spread of invasive species. Many invasive species aren’t readily visible to the naked eye, including zebra and quagga mussel veligers, spiny and fishhook waterfleas and viral hemorrhagic septicemia. Icing the day’s catch makes it so anglers don’t need to transport water and the organisms in it, while also improving table fare. The invasive white perch would go well on ice, as would the yellow perch and any of the other delicious fish species found in Wisconsin. A fish on ice is twice as nice; that’s a win-win if I’ve ever heard one.

Three clean boat steps—Clean. Drain. Dry. Follow those three simple steps to stop aquatic hitchhikers. Not already familiar with the three clean boat steps? Here they are in a little more detail: Clean any weeds, mud and debris from your boat, motor and trailer. Drain any water from the boat, motor, live wells, bait wells and bilge. Dry any equipment that came in contact for more than five days, especially if you will be using it on different waterbody.

Two red swamp crayfish—Two is the number of documented red swamp crayfish populations in Wisconsin. Both populations were detected early and contained. Time will tell if eradication efforts were successful in eliminating this common classroom dissection subject. Similar introductions can be prevented in the future by not releasing unwanted pets and classroom specimens. Not using crayfish as bait can also help prevent future crayfish invasions.

And a carp barrier in the city!—There are actually three electric barrier arrays in the Chicago Sanitary and Ship Canal. Two of the barriers are always on, while the other is on standby to provide emergency backup or to be functional during periods of maintenance. This configuration has prevented radio tagged fish in an Army Corps of Engineers study from moving upstream of the barriers. As long as the electricity remains on, these barriers should prove to be effective at preventing additional silver and bighead carp from entering the Great Lakes until a more permanent solution can be found.