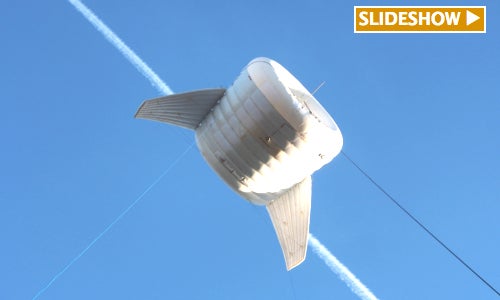 At first glance, you might mistake the potential future of wind energy as a blimp—the type of added effect perfect for flying over a carnival or football game.

Instead, the BAT—Buoyant Airborne Turbine—is a wind turbine inside of an inflatable, helium shell capable rising 1,000 feet above ground. Altaeros Energies, a firm housed at small business incubator Greentown Labs near Boston, MA, is deploying the BAT as part of an 18-month, $1.3 million project in Alaska as the first-ever commercial, high-altitude wind turbine demonstration project.

The 1,000-foot height would also qualify as a record for the tallest wind turbine. At that height, the BAT would be about 275 feet taller than the current record holder for the highest wind turbine, the Vestas V164-8.0-MW, which was installed as a prototype at the Danish National Test Center for Large Wind Turbines in Østerild, Denmark. Last year, Altaeros successfully tested a BAT prototype in 45 mile-per-hour winds,  500 feet above its test site in Maine.

Altaeros CEO Ben Glass says the BAT represents a breakthrough in wind energy when compared to what he views as “incremental” improvements in the industry’s technology. That’s partly because it makes use of strong winds at heights that promise to generate more energy than the average turbine. The device’s tethers are designed to hold the BAT steady and send electricity to the ground.

“The reason high-altitude wind is so exciting and worth going after is really very simple—there’s just a lot more of it,” Glass said in a video interview. “Winds 1,000 to 2,000 feet above the ground are, on average, five to eight times as powerful as what you get nearer to the ground.”

Altaeros is targeting off-grid areas, including island communities and disaster relief zones. The demonstration project is funded through a partnership with the Alaska Energy Authority and private investment from Ratan Tata. Additional funding comes from the National Science Foundation, the California Energy Commission, and the ConocoPhillips Energy Prize.

The company says the BAT can be transported and set up without large cranes, towers or underground foundations.

Glass formed Altaeros with Adam Rein, a Greentown Labs board member, a few years ago while the two studied at the Massachusetts Institute of Technology.