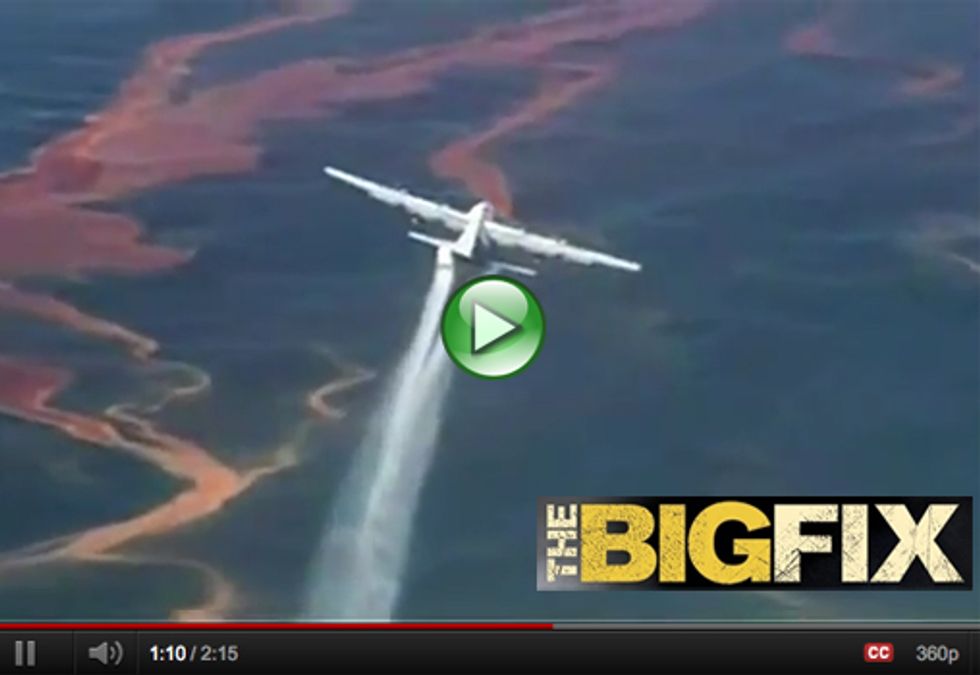 A Wide Coalition of Environmental Advocates will Gather for 7 Nights of Awareness and Talk with the Filmmakers and Audience after each 6 p.m. Screening

The BP Deepwater Horizon rig exploded on April 20, 2010. Most of us thought the spill was cleaned up and the problem went away. Unfortunately, to a large extent, the event has been supplanted in the media and mass consciousness by other news stories and events from around the world.

After watching the documentary The Big Fix, it is hard to conclude that things are so rosy down in the Gulf. In fact, the bottom line message from this well-documented film, produced and directed by Josh Tickell and Rebecca Harrell-Tickell, is that the BP oil spill in the Gulf never went away and the oil is still spilling. And to top it off, the chemical dispersant, Corexit, which is still being used to clean up the oil, is an extremely toxic substance. The film reports that Corexit is wreaking havoc on the health of the people and marine life in the Gulf.

When you watch how the the Gulf residents captured in The Big Fix have been affected by Corexit and the spill, beware, it is both heart wrenching and frightening. When you see Gulf residents driven to tears by this environmental tragedy, you want to cry with them. Rebecca, herself, was seriously sickened by Corexit during their filming in the Gulf.

When you listen to eco-activist, Jean-Michel Cousteau, son of champion of the seas Jacques-Yves Cousteau, state so emotionally in the film, "We're being lied to," you realize the truth about the Gulf oil spill is being covered up.

When Josh and Rebecca emailed me to say they were opening The Big Fix in NYC at the AMC Loews Village 7, 66 3rd Ave., on Dec. 2 - 8 and wanted to create 7 Nights of Awareness in the theater, I immediately jumped on board. The purpose for the 7 Nights of Awareness is to divulge the truth about what's going on in the Gulf, in addition to stimulating a dialog that will foster positive action and create solutions which will help our planet become less dependent on fossil fuels and sustainable.

Despite the negative events depicted in the film, the filmmakers make a point to highlight an endearing bayou local. He wears a yellow t-shirt and dons a Mardi Gras-like necklace across his tanned neck while installing solar panels on the metal roof of his modest home. Tickell narrates at the end and urges the audience to "unite and take a stand" and deal with the truth, and get on with implementing clean energy solutions that are at hand. Tickell concludes the film by asking, "In a struggle for true justice and a better world, where do you stand?"

For more information about the 7 Nights of Awareness, email me at [email protected]. Visit TheNewYorkGreenAdvocate.com where this review was originally posted.