The Tar Sands Oil Spill That Can’t Be Stopped 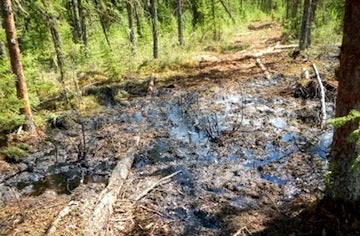 This disaster has been years in the making, but finally the reality of tar sands mining may be hitting home.

According to an article in the Canadian Star, underground tar sands operations have resulted in four separate oil spills that have been leaking over the last six weeks. The spills have been on-going since May, with some 26,000 barrels of bitumen mixed with surface water having been removed, including over 4,500 barrels of bitumen. 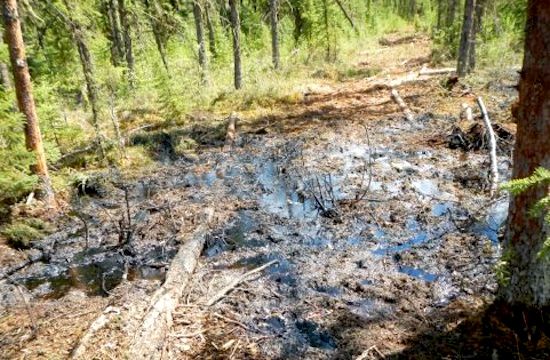 Oil spills at an oil sands operation in Cold Lake, Alberta have been going on for weeks with no end in sight.

The paper points out that the spills—although relatively small—cast doubt on the safety of underground extraction methods.

And indeed they do: if you think about BP’s catastrophic disaster in the Gulf, at least there was a traditional well-head that the company could plug. But no such thing exists for the tar sands.

The company responsible, Canadian Natural Resources Limited, uses an in situ or underground extraction method of extracting the oil, which is called “cyclic steam stimulation.”

This involves injecting thousands of gallons of boiling hot, high-pressure steam into deep underground reservoirs. This in turn liquefies the bitumen and creates cracks through which the bitumen flows. It is then pumped to the surface. The problem is that it that the company has created fractures from the oil reservoir reaching the surface that they did not expect. Oil has been flowing to the surface at different sites.

The paper quotes one scientist saying that everybody in the company is concerned and the government “is freaking out about this. We don’t understand what happened. Nobody really understands how to stop it from leaking, or if they do they haven’t put the measures into place.”

“This is a new kind of oil spill and there is no ‘off button,’” Keith Stewart, an energy analyst with Greenpeace who also teaches at the University of Toronto, told the paper. “You can’t cap it like a conventional oil well or turn off a valve on a pipeline.”

“You are pressurizing the oil bed so hard that it’s no wonder that it blows out,” adds Stewart. “This means that the oil will continue to leak until the well is no longer pressurized.”

And that could be months.

This problem could get more common as in situ tar sands extraction is expected to account for 40 percent of Canada’s oil sands production by 2020.

Meanwhile, tomorrow, the UK Tar Sands Network—which is leading the anti-tar sands fight in the UK—will release a new info-graphic website that showcases two possible future energy scenarios for 2035: the one we are currently headed for which would result in runaway climate change; and one without fossil fuels.

“We’re standing at a crossroads,” said Jess Worth, from the UK Tar Sands Network. “It’s time for humanity to make a choice. Do we sit back and allow fossil fuel companies and oil-friendly governments to dig, drill and frack us into a dark and dirty future? Or do we stand together with communities around the world to stop these extreme energy projects, and head down a different path?”