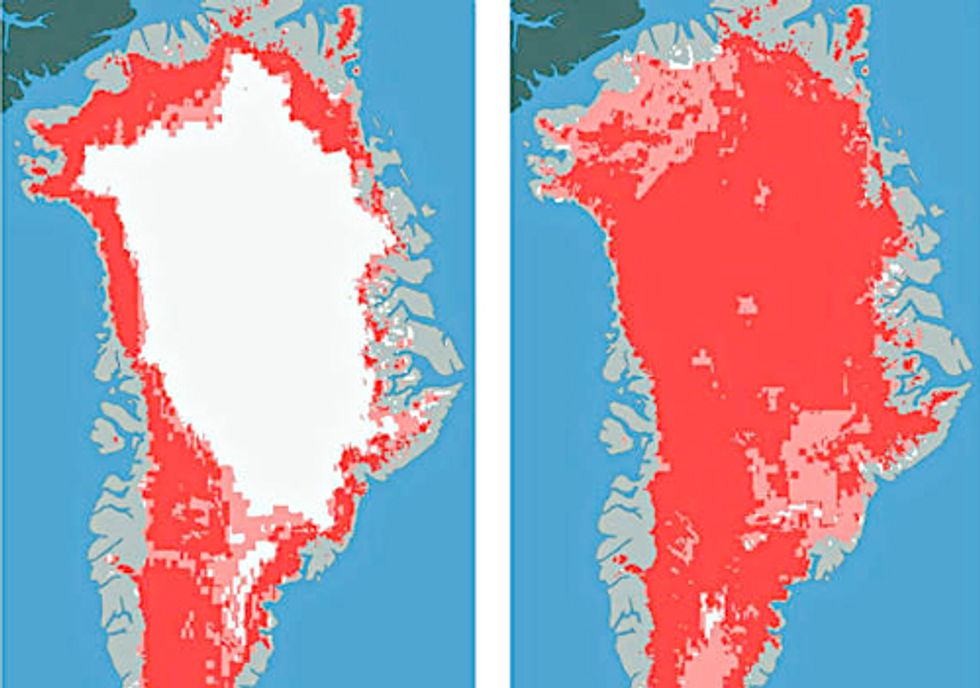 The news that an unusually widespread melt occurred in Greenland during mid-July, when 97 percent of the Greenland ice sheet—including normally frigid high-elevation areas—experienced some degree of melting, has made international headlines, and for good reason. Such a widespread melt event has not occurred there since at least 1889, and may be yet another sign of the consequences of manmade climate change.

But what does this event mean in the bigger picture of ice melt and sea level rise, and what led to it in the first place?

Extent of surface melt over Greenland’s ice sheet on July 8 (left) and July 12 (right). Measurements from three satellites showed that on July 8, about 40 percent of the ice sheet had undergone thawing at or near the surface. In just a few days, the melting had dramatically accelerated and an estimated 97 percent of the ice sheet surface had thawed by July 12. Credit: Nicolo E. DiGirolamo, SSAI/NASA GSFC, and Jesse Allen, NASA Earth Observatory

The widespread melt so far this season, while dramatic and worrisome to many climate scientists, does not necessarily mean that Greenland is headed for a far faster and more significant melt than scientists already anticipate. The current projections for sea level rise related to the melting of Greenland and Antarctic ice sheets is scary enough, with the likelihood that it will raise global sea levels by about 2 to 6 feet by 2100.

Greenland is the world's largest island, and it holds 680,000 cubic miles of ice. If all of this ice were to melt—and that won't happen anytime soon—the oceans would rise by more than 20 feet.

William Colgan, a research associate at the Cooperative Institute for Research in Environmental Sciences at the University of Colorado, said the July melt event is extremely rare, but not completely unheard of. He said an analysis of ice core records from Greenland Summit station, which at 2 miles above sea level is near the highest point on the ice sheet, shows that the high elevation areas of Greenland have experienced melt about once every 150 years during the past 10,000 years. However, such a widespread melt event is unprecedented in the observational record, which dates back to about 1930.

In this chart you can see that a very strong area of high pressure (in red shading surrounding Greenland) set up shop over Greenland during July, providing warmer than average air temperatures and clear skies to enhance surface melting. Credit: NOAA via Joe Witte.

NASA detected the melt event using observations from three different satellites, and the satellite record extends back by about three decades. The satellites have never caught anything like this either, not even for a very short time period.

“In terms of the importance and significance of an entire ice sheet melt event: Obviously it gets you thinking the future of the Greenland Ice Sheet,” Colgan said in an email conversation. “But since we are looking at a record event, rather than a trend, it is not really possible to directly translate this into a projection of future ice sheet behavior.”

Greenland's ice has been melting faster than many scientists expected just a decade ago, spurred by warming sea and land temperatures, changing weather patterns and other factors. Recent findings that were first reported by Climate Central, showed that the reflectivity of the Greenland ice sheet, particularly the high elevations that were involved in the mid-July melt event, have declined to record lows. This is an indication that the ice sheet has been absorbing more incoming solar energy than normal, potentially leading to another record melt year—just two years after the 2010 record melt season. The low reflectivity may have been a harbinger of the unusually widespread melt event.

Jason Box, a researcher with Ohio State University's Byrd Polar Research Center who has been following the low reflectivity trends, wrote on his blog that he projects a 100 percent melt area in Greenland "within another similar decade of warming," noting that this "may be coming true already."

Colgan said recent Greenland ice loss trends are a part of the ice sheet's response to the warming climate.

“Perhaps all we can say is that the frequency with which Greenland record melt years are being established is exceptional. It clearly demonstrates that the Arctic climate is no longer in steady-state, whereby climate oscillates around some mean state and extreme events are relatively rare, but rather that Arctic climate is in a highly transient state, whereby progressively more extreme events are exceeded as climate trends in a given direction,” Colgan said.

According to Colgan, the historical widespread melt events involving the ice at high elevations were largely the result of natural variability from solar cycles, but July's event might have been the result of manmade climate change, which is warming the Arctic at about twice the rate of the rest of the globe.

“I think it is clear that entire ice sheet melt events are now increasing in frequency as a result of anthropogenic [manmade] climate change, rather than natural variability in solar insolation,” he said.

As for what led to this unusual event, it was set off by unusually mild weather conditions that have occurred more frequently in that region during recent summers. According to NASA, a series of High Pressure centers, or “ridges” in the upper atmosphere, have set up over Greenland since May, NASA said, pumping mild air into the area and resulting in less cloudiness than average. The ridge, or “heat dome,” is similar to the weather patterns that have caused record heat in much of the U.S. this summer.

“This latest heat dome started to move over Greenland on July 8, and then parked itself over the ice sheet about three days later. By July 16, it had begun to dissipate,” NASA reported. At the Summit station, the high temperature on July 11 was 36°F, which was warm enough to thaw snow and ice at that high altitude.

Sea surface temperatures have also been running much above average along the western coast of Greenland, which likely contributed to the loss of a massive chunk of ice from the Petermann Glacier in mid-July.

The melt event comes during a summer season that also saw a rare event occur off of the ice sheet. In Kangerlussuaq, Greenland, which is a key transport and logistics hub for scientific expeditions studying the Greenland ice sheet, meltwater runoff turned a small river into raging rapids, and wiped out a bridge that had stood for at least 60 years.