The Speech I Gave to FERC From Baggage Claim Area 3 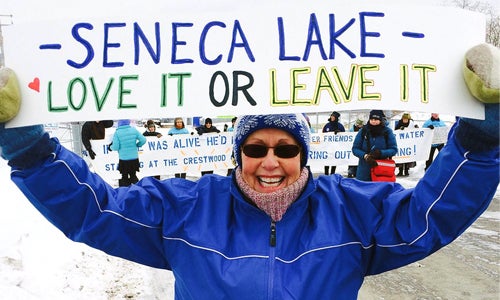 Author’s note: On Wednesday, I was part of a citizen delegation that met with the chief commissioner of the Federal Energy Regulatory Commissioner (FERC), Cheryl LeFleur, and eight of her staff. Led by Ted Glick of Beyond Extreme Energy, who had requested the meeting, our group included Tracey Eno from We Are Cove Point and Jocelyn D’Ambrosio of Earthjustice. I represented We Are Seneca Lake. Sadly, my flight from upstate New York was delayed for hours by bad weather. Hence, I ended up delivering my remarks to Commissioner LeFleur by speakerphone, while standing just outside the baggage claim area of Dulles International Airport. 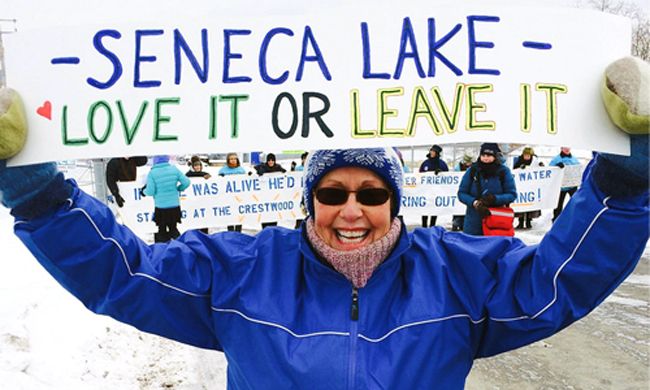 Since the We Are Seneca Lake campaign began on Oct. 23, 2104, there have been 216 arrests. The campaign is working to protect Seneca Lake and the surrounding Finger Lakes region from the gas storage expansion project by Texas-based energy company, Crestwood Midstream. Crestwood’s intention is to repurpose the crumbling salt mines underneath Seneca Lake’s hillside into massive gas tanks for highly-pressurized products from fracking: methane, propane and butane. Photo credit: We Are Seneca Lake

FERC disallows ex parte conversations with staff about projects that are still under review in some way—and that’s a policy I agree with. Thus, I spoke not about the specific risks and harms of the Seneca Lake gas storage expansion project, but instead addressed my comments to larger concerns about the agency’s capitulation to the oil and gas industry. Ulimately, FERC is overseen by President Obama and reflects his failed energy and climate leadership, in spite of good rhetoric. The administration’s unquestioning devotion to natural gas is reflected in remarks made by Commissioner LeFleur in a recent speech before the National Press Club, and her words became the starting point for my own:

We’re very fortunate to have abundant and relatively affordable domestic natural gas … But utilizing that gas to meet climate goals require the expansion and construction of gas infrastructure, both pipelines and compressor stations, to get it to where it needs to be to keep the lights on. But while gas is critically important to our climate goals and other environmental goals, it has issues of its own. Pipelines are facing unprecedented opposition from local and national groups including environmental activists. These groups are active in every FERC docket, as they should be, as well as in my email inbox seven days a week, in my Twitter feed, at our open meetings demanding to be heard, and literally at our door closing down First Street so FERC won’t be able to work.

We have a situation here. We take the views of all stakeholders seriously and try as hard as we can to thoroughly consider issues that are relevant to the decisions we’re required to make. But FERC’s responsibility under the Natural Gas Act, because we’re a creature of Congress, is to consider and act on pipeline applications after insuring that they can be built safely and with limited environmental impact.

My remarks prompted no questions from FERC staff. At the end of our meeting, I did ask one question of Commissioner LeFleur: “What message would you like me to bring back to the people of Seneca Lake?”

Her answer: “I would hope that you would tell them that you were listened to.” And then she added, “Of course, I can’t tell you how to feel.”

Here is the script of my prepared remarks:

I am a mild-mannered biologist and mother of two. Although I would much prefer to let the data speak, I have now twice received a 15-day jail sentence for trespassing in opposition to a FERC- approved project.

Before all that, I helped direct hundreds of written comments to FERC from concerned members of the public and have spoken at multiple public hearings and helped prep many others, including fellow scientists, to do so. What I learned from these experiences is that FERC doesn’t listen to impacted citizens or to independent science. It now seems to me that the public hearings and the collection of data are just boxes for FERC to check on its way toward indiscriminate, foreordained approval of whatever plan the oil and gas industry puts before it.