The Solar Revolution Is for Everyone 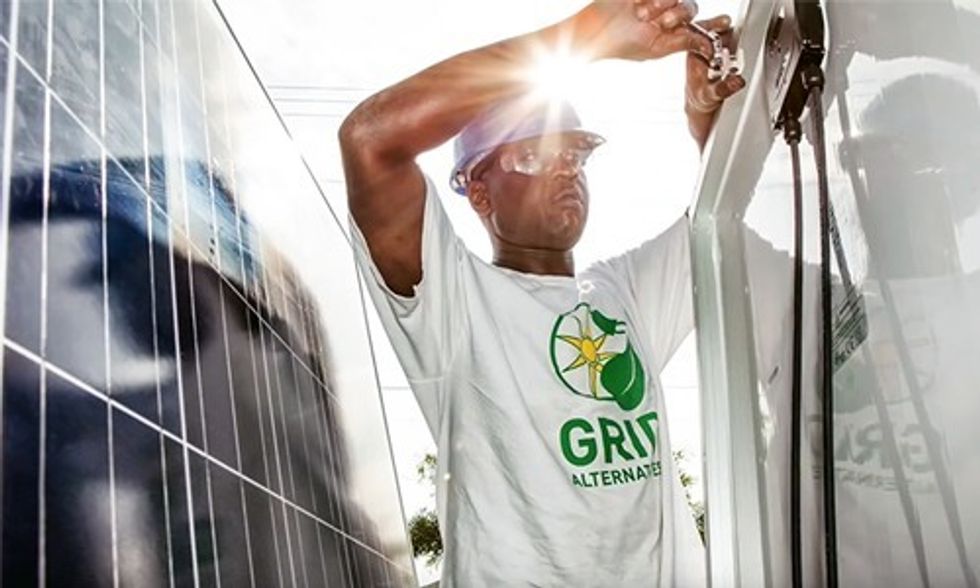 Solar companies like GRID Alternatives are changing lives, and Solar Energy Industries Association captured it on film during a job fair at Solar Power International in Anaheim, California in September.

The U.S. solar industry employs 174,000 Americans nationwide, but this number is so much more than a piece of data. This number represents the people who are directly behind an energy revolution, whose stories encapsulate the very essence of solar’s character.

When it comes to both ethnic and gender diversity, the solar industry surpasses the oil, gas and coal industries. Photo credit: GRID Alternatives

The solar workforce is diversifying our nation’s power grid—through the rooftops of your homes, your community’s solar gardens, churches and businesses and through your utility’s large-scale solar plants.

But what 174,000 does not immediately represent is the growing diversity of people behind the number. According to The Solar Foundation’s most recent jobs census, solar is for everyone.

With the demand for solar energy now higher than ever, the workforce is projected to grow by more than 36,000 jobs by the end of the year alone. And the industry is ramping up its training and recruitment opportunities to ensure its workforce continues to be as diverse as its consumers.

In fact, the solar industry is committed to becoming the most diverse energy sector in the nation, as Americans from all walks of life take advantage of the benefits of solar and its cascading price tag.

#Solar is one of the fastest-growing, most diverse & engaging industries in America. Solar is for everyone. http://t.co/7RaUVIQGpa
— Solar Industry (@Solar Industry)1445277502.0

Solar already employs a higher percentage rate of veterans than the total U.S. workforce, but the industry upped the ante this spring by committing to having 50,000 U.S. veterans working in solar by 2020.

But the industry cannot keep its commitment to provide well-paying jobs for more Americans if Congress makes a wrong decision on a looming federal policy. The solar investment tax credit (ITC) provides a 30 percent tax credit to commercial and residential solar users, which has helped the solar industry crack 22 gigawatts for the first time in history this summer.

Under the policy, total U.S. solar capacity is expected to double over the next two years. But if the ITC is allowed to expire from its current levels on Dec. 31, 2016, 100,000 jobs could be lost nationwide.

There is more work to do, and more Americans who are eager to help solar drive America to its new clean energy future. Tell Congress 174,000 isn’t enough.