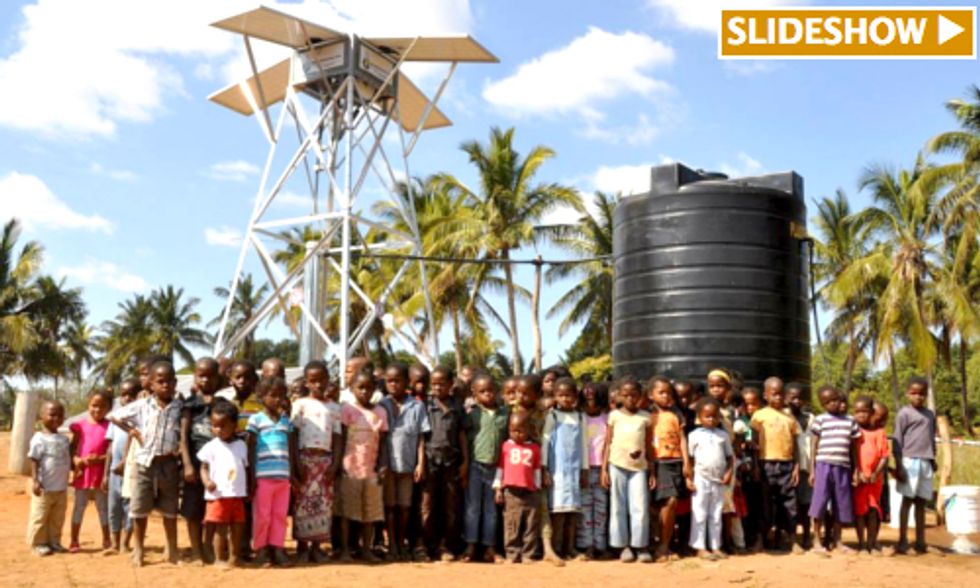 An Austrian company hopes to play a large role in ending the water crisis with a technology powered by renewable energy.

Pumpmakers created the NSP Solar Pump system with hopes of brining clean and safe drinking water to the nearly 800 million people around the world without it. The United Nations estimates that 6 to 8 million people die each year from water-related diseases. That's equal to about 10,000 deaths per day, with most under age 5.

"There are two main obstacles faced by the communities in this crisis—either communities have no access to clean drinking water at all or they have to rely on water pump systems that require a lot of maintenance, which in many cases is simply not available locally," Dr. Birgit Stuck, field researcher for Pumpmakers, said in a promotional video.

Pumpmakers' inexpensive system incurs no running costs while using solar energy to pump water from as deep as 300 feet, even on cloudy days. The company, which began working on the project in 2011, used "maintenance-free" materials to make it easy to construct and use.

While the solar pumps have been providing clean water for the people of Ndzofuine, a remote village in Mozambique, since 2012, Pumpmakers now envisions people and other companies strengthening their own local economies by providing the systems to their communities. Most of the components for the pump can be manufactured locally. Once Pumpmakers latest round of crowdfunding is complete, the company will be able to offer some of the hard-to-find components on its website, like the gear unit.

About 800 people in Ndzofuine get clean water from the pump with a capacity of up to 5,000 liters that are pumped from a depth of 262 feet each day.

"Our goal is to establish Pumpmakers.com as the platform that connects local pumpmakers with underserved communities and with organizations such as NGOs and private supporters," according to the company video.

"With the power of the crowd, we can create a meaningful tool to prevent the shortages of water and poverty worldwide."