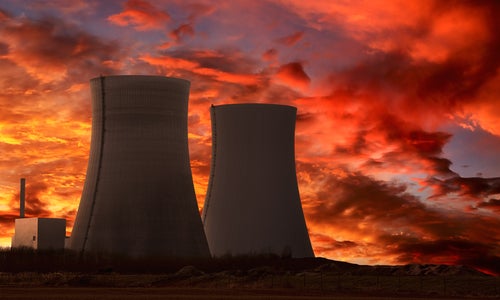 The Chairman of the U.S. Atomic Energy Commission Lewis Strauss noted in a 1954 speech to the National Association of Science Writers that the splitting of the atom and the dawn of the Atomic Age heralded, in his view, a coming era of electrical power that for consumers would be “too cheap to meter.” Soon, he said, “it would not be too much to expect that our children”—meaning, of course, us—would know of things like famine, limited range of travel and nearly every other human malady only from reading about them in history books. 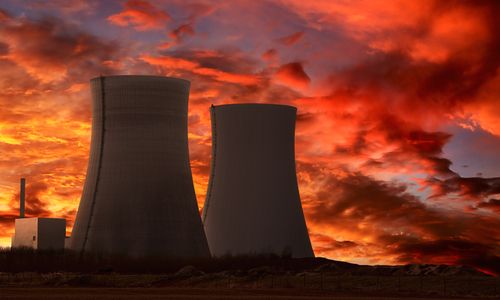 The technology known as nuclear power today is a lumbering giant utterly dependent on state-based largesse for its existence. Photo courtesy of Shutterstock

Born on a great tide of technological progress released by the atom, he intoned, mankind would collectively face a new age of prosperity the likes of which the world had never known before. At the time it was widely assumed that Strauss—a pivotal figure in America’s early years of nuclear experimentation and tinkering—was talking about fission power, as he had just days earlier spoken of industry having at its command vast amounts of “electrical power from atomic furnaces,” at the groundbreaking of the Shippingport Atomic Power Station, the world’s first full-scale, civilian nuclear power reactor, located outside of Pittsburgh.

In fact, Strauss was actually talking about fusion power, which, at the time, was a top secret, Cold War concern of the American government. However, the supposition of the country’s technocratic elite was that just as fission research had led to both the atomic bomb and plants like the one at Shippingport, fusion breakthroughs would soon lead to controlled fusion reactions and reactors that would herald the coming age of plenty that Strauss predicted.

From too-cheap-to-meter marvels to state-supported dinosaurs

History didn’t turn out as Strauss had envisioned, of course, as a controlled fusion reaction—as opposed to the uncontrolled variety which scientists easily pulled off and turned into ever more powerful nuclear weapons—proved devilishly difficult to produce. Controlled fusion was orders of magnitude more difficult to achieve, as it meant capturing the process that fueled the sun and placing it at the center of an apparatus that could both contain and sustain the reaction while drawing enough energy from it to provide all that electricity Strauss said would be too plentiful to even bother billing people for using.

While we are much closer today to the dream of fusion power than we were in 1954, it is still some ways off, and in the meantime, the type of plant represented by the Shippingport Power Station—dirty, dangerous and relatively inefficient fission-based reactors—became the standard-bearer for nuclear energy. Thus, a stopgap technology meant to be merely the first section of a fusion-based bridge to the future that we were never supposed to come to rest upon became what humanity adopted and got stuck with. Instead of being too cheap to measure, the technology known as nuclear power today is a lumbering giant utterly dependent on state-based largesse for its existence.

To see why, one has to only look at how fission-based reactor plants were adopted since 1954. In the West, reactors became the preserve of heavy industry that worked hand-in-glove with the state to ensure that reactors got built, and while the safety record of the West’s reactors is rather remarkable, it came at huge cost. Put simply: The inherent danger represented by fission reactors—as seen at Three Mile Island, Chernobyl, and now Fukushima—represents a potential cost so high that the state became the only entity large enough to bear it.

Because of this danger, Western plants—from America’s privately-built and -operated reactors, to France’s gleaming fleet of power stations—are all required to be too big to fail, and rightly so. After all, if a major accident were to occur, the damage inflicted would be incalculable. But being required to be too big to fail often means fission reactors are too expensive to build privately and, thus, require state intervention to succeed. In the U.S., this intervention comes in the form of massive subsidies, both direct and indirect, which lower the cost for corporate actors at every end of the business—from the mining of uranium, to the storage of radioactive waste. Indeed, nuclear subsidies in the U.S. are so huge that their value is often greater than any actual energy produced.

To drive home the point of just how coddled the nuclear power industry is in America, consider the Price–Anderson Nuclear Industries Indemnity Act of 1957—since renewed several times. It established a no-fault insurance-type system for the industry, in which the industrial player responsible for an accident is liable for the first $12.6 billion in damages. Past the $12.6 billion mark, the federal government would effectively be responsible for covering losses incurred by the public. As should be obvious, this is a laughably small amount and it means that if a major accident would ever occur in the U.S., Uncle Sam—not the local power company—will be responsible for covering your now-glowing losses.

Meanwhile, in France—the Western country that has had perhaps the best experience with fission-based nuclear power—a state-controlled company runs the country’s nuclear power plants and a state-coddled national champion builds them. As a result, even more in France than in the U.S., the economic cost of nuclear power is borne by the taxpayer. While France has as a result managed to create a very large, very safe nuclear power industry that exports large amounts of electricity to neighboring European countries, it is not a private one by any stretch of the imagination. It is the French state—not the market—that is behind the success of France’s nuclear energy industry.

What’s more, no one has come up with a viable scheme to take care of the immense amounts of radioactive toxic waste produced by fission reactors, and there’s certainly no scheme that would do so for the millennia required to keep such material out of harm’s way. Current plans bandied about in both Europe and the U.S. envision entombing the waste deep underground for over 10,000 years, but so far, few communities have proven willing to host the giant waste repositories anywhere near them. This has led to the stalling of U.S. plans for long-term storage, while development of similar plans in Europe are behind schedule, over budget and proceeding piecemeal, at best. Regardless of what is eventually done with the waste, it is guaranteed to be something that taxpayers will ultimately be on the hook for in one way or another for decades—if not centuries—to come.

Fission’s extinction is on the horizon

Thus coddled, it should come as no surprise that nuclear power became limited in scale and scope as the 20th century wore on. Indeed, nuclear energy’s share of civilian electricity production has remained relatively stagnant for years, and outside of China—another centrally-planned system of government support that those running French and American reactors might find familiar and comforting—signs of a so-called nuclear renaissance once touted by industry supporters has shown little sign of actually appearing. Indeed, commercial fission-reactor power plants in the U.S.—just like coal—are being driven to extinction by competition from gas, wind and now solar power.