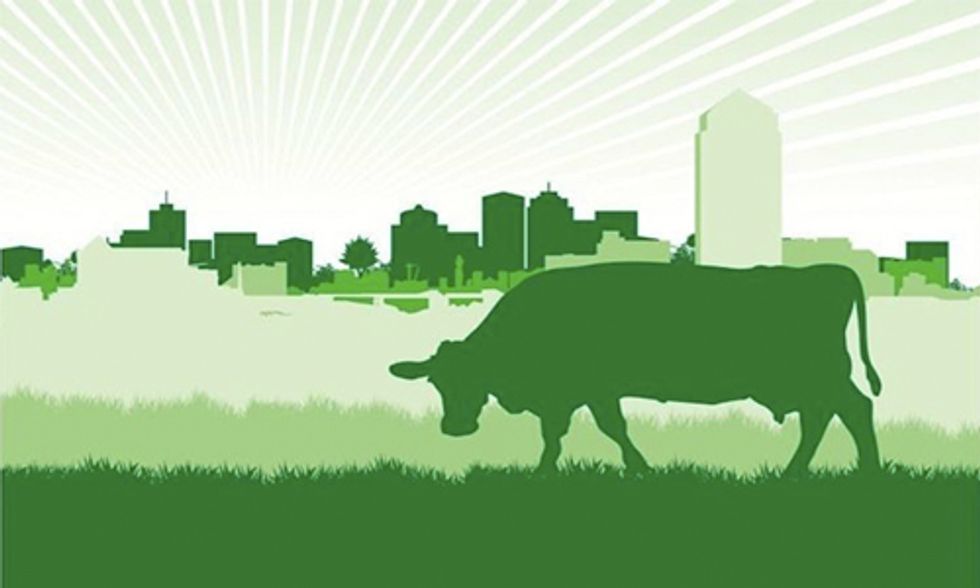 I won’t keep you in suspense. The key to carbon-friendly diets lies just beneath your feet: the soil. We are so used to looking skyward when thinking about climate, this is a bit counter-intuitive.

Carbon in soils represents both a problem and an opportunity. On the one hand, soil’s degradation is truly alarming. According to the book Dirt: The Erosion of Civilizations, at the current erosion rate the earth “would literally run out of topsoil in little more than a century.” And soil is the source of one-tenth of the earth’s human-caused carbon losses since 1850.

On the other hand, this creates a ripe opportunity. Unlike carbon from burned fossil fuels, carbon losses from soils can be reversed. The world’s soils have the capacity to absorb massive amounts of additional carbon, which means a chance for climate change mitigation on a global scale. Scientists agree:  the carbon bank can be recreated. The National Academy of Sciences and the Intergovernmental Panel on Climate Change (IPCC) both say that sequestering carbon in the soil offers almost 90 percent of the mitigation potential for all of agriculture’s greenhouse gases.

How do we move carbon from the atmosphere to the soils in stable forms, (which is essential to mitigate climate effects)? The science is emerging. Yet several strategies have been shown to help:  land-applying organic matter, like compost, adopting no-till cultivation methods, and improving soil structure to help encapsulate carbon. Plowing, badly managed grazing, and agricultural chemicals damage soil biology, thus hampering carbon sequestration. Conversely, organic farming, well-managed grazing, and pasturesfoster carbon sequestration.

Grass is a key element. Grasslands make up some 40 percent of the earth’s land surface and, additionally, grasses cover crop-fields for part of the year in many diversified farming operations. A UK Soil Association report on climate change concludes that grass is uniquely capable of forming soil carbon thanks to its high root densities, fine root hairs, and high levels of fungi living with its roots. Grasses take up CO2 from the air during photosynthesis. In symbiosis with root-dwelling fungi and with a substance calledglomalin (discovered in 1996 by U.S. Department of Agriculture researchers), plants then exchange carbon for nutrients in the soil. Glomalin assists the transactions and aids in forming carbon-laden soil clumps, aggregates, which makes the carbon truly sequestered.

Wherever there is grass, grazing animals are its indispensable partners. Their clipping mouths prune plants, stimulating vegetative growth and assisting sunshine in reaching seedlings; their trampling hooves press seeds and plant litter into the ground, aiding seed germination and litter decomposition; and their digestive tracts speed the cycling of nutrients through the system, adding valuable organic matter to soil, ultimately enhancing nutrient exchange and the soil’s water holding capacity. Grazing thus bolsters soil regeneration and supports grass’s diverse functions, from the microscopic to the ecosystem.

Up the road from us here in Marin County, California, UC Berkeley scientists are working with cattle ranchers to determine optimal carbon sequestration methods on grazing lands. In the UK, the Soil Association and Sustainable Food Trust both recognize the value of grazing animals in carbon sequestration. Soil Association research shows that when cattle are raised primarily on grass, and good farming practices are followed, enough carbon could be sequestered to offset the methane emissions of all UK beef cattle and half its dairy herd. Similarly, in the United States, the Union of Concerned Scientists estimates that as much as 2 percent of all greenhouse gases (slightly less than the 2.2 percent attributed to U.S. cattle) could be eliminated by sequestering carbon in the soils of grazing operations. Grazing animals thus provide important nourishment in the form of meat and milk as they perform crucial ecological services.

But perhaps you’ve heard that cattle are a serious climate change problem. In my book Defending Beef I present a science-based explanation why I strongly disagree. While limited space here makes it hard to re-cap, the short version is that the negative climate effects of cattle are outweighed by their many positive attributes—including assistance in carbon sequestration. The digestive processes of cattle (and other ruminant animals, like goats and sheep) do result in methane emissions. But it’s precisely the ruminant’s remarkable ability to live off nothing but grass, and it’s ecological contribution as a maintainer of grassland ecosystems, that results in this methane. Cattle and other ruminants hasten the natural cycles of vegetation’s biological decay. Taking advantage of the very real benefits of grazing while reducing the methane of ruminants is under study at universities around the globe. Various approaches (such as certain feed supplements) are being found to reduce enteric methane by as much as 50 percent.

Years ago, I wrote an essay for the New York Times that discussed the food system’s links to global warming. As I wrote then, a large amount of the energy expended in the food system is from transportation, storage and preparation. A more climate-friendly system would reflect nature’s seasons, emphasize regional food production, and minimize waste. Almost 40 percent of U.S. food produced is thrown away at the same time that food waste is a leading cause of human-generated methane. There is no upside to food waste. Food typically travels more than 1000 miles before it’s consumed; grocery store offerings are nearly identical year-round, even though much of the produce is imported from the Southern Hemisphere for the colder months of the year. Changing the norms of how we shop and eat is important.

Even more importantly, public policy to advance soil carbon sequestration should urgently be adopted. Incentives should encourage diversified and organic farming; farmers should be rewarded for adopting farming practices that create and appropriately manage grass and foster carbon sequestration.

How can an individual achieve a climate-friendly diet? Despite what one sometimes hears, that question has no simple answer. Buying foods that are in-season, local, and organic is helpful. Supporting soil-building, grass-based farming—that both mitigates climate change and can better withstand it—may be even more important.

Nicolette Hahn Niman is the author of Defending Beef: The Case for Sustainable Meat Production. She was the Senior Attorney for the environmental group Waterkeeper Alliance, and a lawyer for National Wildlife Federation before that. She now raises grassfed cattle and heritage turkeys in Northern California.

Vandana Shiva: ‘Our Very Existence on This Planet Is Being Called Into Question’

Why You Should Grow Heirloom Seeds