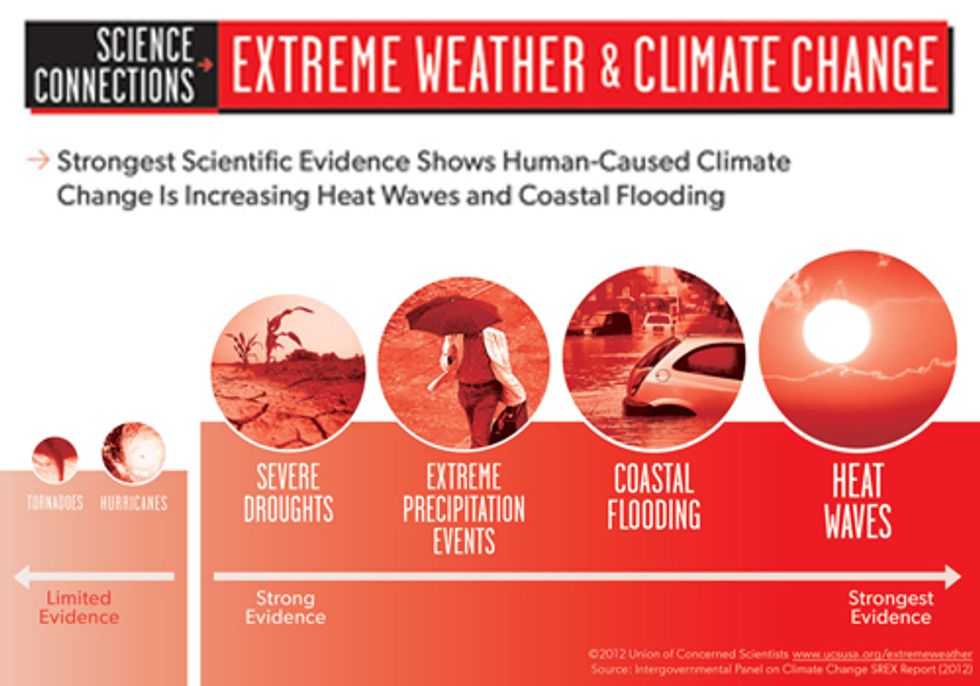 As Hurricane Sandy dissipates and recovery efforts begin, people are asking what role climate change plays in influencing such storms.

Oceans have absorbed much more of the excess heat from global warming than land and scientists understand that when hurricanes form, higher water temperatures can energize them and make them more powerful. Warming is also causing the atmosphere to hold more moisture and concentrate precipitation in stronger storms, including hurricanes. In the case of Hurricane Sandy, it retained much of its strength as it tracked across ocean water that was 9 degrees (F) warmer than average for this time of year.

However, the evidence is unclear when it comes to how frequently major late-season hurricanes such as Sandy may form in a warming world. Several factors, including differences in wind speed and direction, can break up hurricanes.

More broadly climate change is increasing sea levels globally, which affects all coastal storms, including hurricanes. Locally, sea level rise along the Mid-Atlantic and New England coasts has been among the highest in the world. Additionally, Hurricane Sandy made landfall during a full-moon high tide, which further drove storm surges that caused extensive coastal flooding. With continued warming, such high tides will become higher and more damaging.

“Human-caused climate change is delivering a one-two punch that is chipping away at our coasts,” said Brenda Ekwurzel, a climate scientist at the Union of Concerned Scientists (UCS). “Sea-level rise and more intense precipitation from a warmer, moister atmosphere make coastal storms more damaging.”

New York City, which has integrated aspects of climate change into its disaster-response planning, is currently grappling with flooded streets and subways. Ekwurzel said that climate change and aging infrastructures challenge many coastal cities.

“For the most part, our sewers, roads and transportation networks were built for our grandparents’ climate,” said Ekwurzel. “When it comes to climate change, city planners need to be our first responders.”

The link between extreme weather and climate change is the subject of much ongoing research. A special report on extreme weather from the Intergovernmental Panel on Climate Change (IPCC) released this summer concluded that coastal flooding and more extreme precipitation were strongly linked to human-induced climate change and are expected to get worse in the future. By contrast, scientists can have only “low confidence” when it comes to the historical link between hurricanes and climate change. In the future, the report said, it’s likely that heavy rainfalls associated with hurricanes will become more intense. Overall, hurricane strength—measured as wind speed—is likely to increase while the frequency of hurricane formation is likely to either remain unchanged or decrease.

UCS created an infographic that puts the report’s conclusions about weather extremes and climate change since 1950 in context.

The size of the circles relate to the strength of the evidence for the connections to climate change of observed extreme
events since 1950. Assessment based on the Intergovernmental Panel on Climate Change SREX report (2012).
Figure source: Union of Concerned Scientists.

Last year, UCS prepared a backgrounder on Hurricane Irene which broadly applies to Sandy, too. It covers global sea-level rise, increasing rainfall for hurricanes and the hard economic choices coastal communities face in a warming world.

Earlier this month, UCS released a letter from more than 120 city and county officials and scientists in Florida calling on the presidential candidates to discuss sea-level rise.

So, what role does climate change play in altering the characteristics and impacts of extreme weather and climate events? What approaches exist for reducing vulnerability and exposure and for managing impacts and disasters associated with extreme events? Scientists discuss the findings of a new international report that brings together, for the first time, expertise in climate science, disaster risk management and adaptation. Watch the video below: