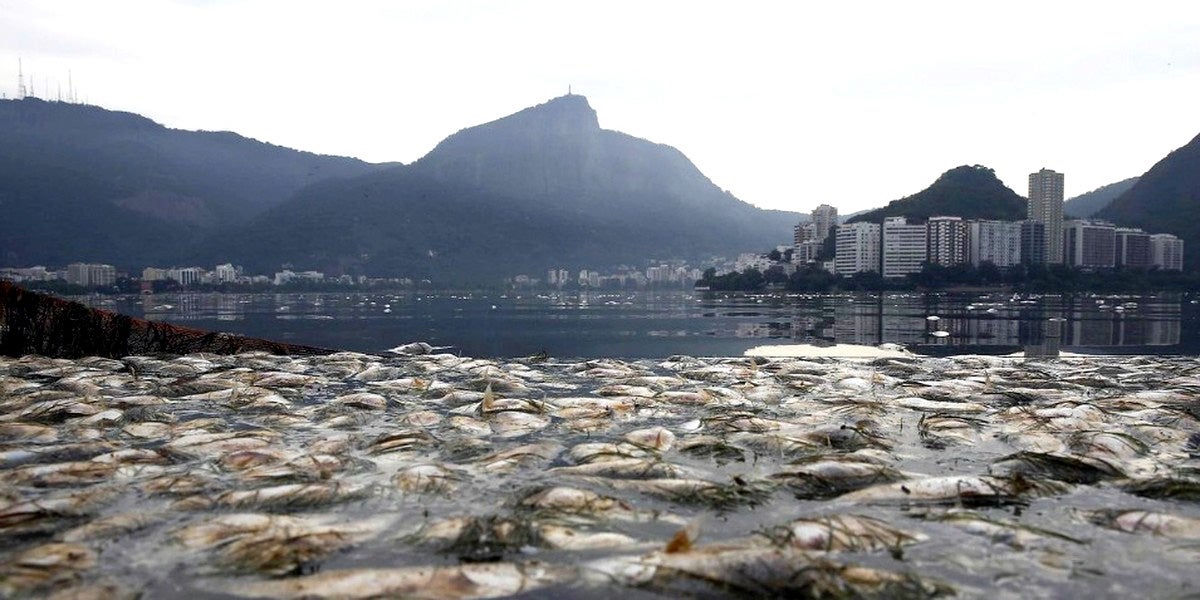 A biology professor has simple advice for athletes and tourists descending on Rio de Janeiro, Brazil for the Olympics’ start on Friday: “Don’t put your head underwater.”

Dr. Valerie Harwood, chair of the Department of Integrative Biology at the University of South Florida, remarked on the dangers posed by Rio’s water to AP, which reported Monday that a 16-months-long study revealed that “the waterways of Rio de Janeiro are as filthy as ever, contaminated with raw human sewage teeming with dangerous viruses and bacteria.” 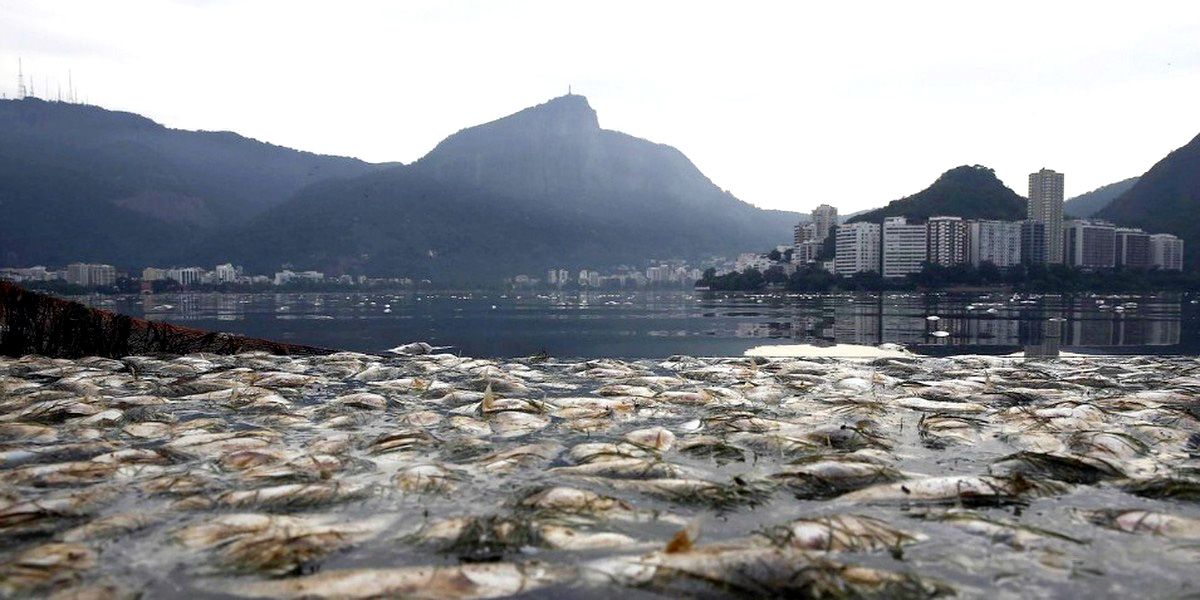 Thousands of dead fish float in the Rodrigo de Freitas lagoon, where the Olympics rowing and canoeing competitions will take place, in 2016.Marcelo Sayao / EPA

The wire service adds that superbugs—bacteria resistant to most forms of antibiotics—were not the only cause for great concern. Shockingly high levels of viruses have alarmed scientists:

[T]he AP investigation found that infectious adenovirus readings—tested with cell cultures and verified with molecular biology protocols—turned up at nearly 90 percent of the test sites over 16 months of testing. “That’s a very, very, very high percentage,” said [Dr. Harwood]. “Seeing that level of human pathogenic virus is pretty much unheard of in surface waters in the U.S. You would never, ever see these levels because we treat our waste water. You just would not see this.”

Swimmers risk serious illness by competing, experts say. “According to a study by the University of Texas School of Public Health, athletes who ingest just three teaspoons of water from the contaminated bay in Brazil have a 99 percent chance of being infected,” the National Observer noted.

“Dead animals, plastic, garbage and furniture are only a sample of the vile items reported to pollute its waters,” the newspaper added “and the athletes competing this August have been told to swim with their mouths closed to avoid contracting serious illness from the water.”

The National Post reported: “Untreated hospital waste is the probable cause of waterborne superbacteria, but chemical waste from factories is another culprit. However, the chief reason that Rio’s waterways are such a petri dish of contaminants is the torrent of untreated human feces that spews out of open sewers such as one located at the east end of the Guanabara Bay, where it is hemmed in by apartments where many of the city’s wealthiest citizens live.”

And it is those wealthy denizens who stand to benefit the most from the Olympics, while the region’s poorest have been displaced by the tens of thousands, their homes demolished to make room for massive sports stadiums.

An investigation published Monday in The Atlantic by Alex Cuadros detailed the schemes, grafts and bribes that have gone on behind the scenes to construct the Olympics infrastructure, while many of the city’s impoverished favela residents are rendered homeless and the region’s battered ecosystem is further degraded.

Cuadros wrote, “Contracts for everything from stadium and train-line construction to port renovations have funneled billions of dollars in taxpayer-subsidized revenues to a handful of Brazil’s most powerful, well-connected families and their companies.” He continued:

[M]ost of the government’s Olympic budget has been poured into the wealthy suburb of Barra da Tijuca, home to only 300,000 people. […]

[A] flood of public money is benefiting the coterie of men who own most of Barra’s land. One of them, a 92-year-old billionaire named Carlos Carvalho, controls some 65 million square feet of property in the area. His most famous project for the Olympics is the so-called Athletes’ Village. After the games are over, all 31 of the Village’s 17-story towers will be transformed into luxury condos featuring multiple swimming pools, tropical gardens and an unobstructed view of Jacarepaguá Lake.

[…] Carvalho is also a partner in construction of the nearby Olympic Park, a sprawling spit of concrete sprinkled with a billion dollars’ worth of sporting facilities. Here, the city handed over lakeside land that Carvalho is expected to develop into a whole new neighborhood, once the economy rebounds and demand picks up again.

As scarce as resources are in Brazil, such subsidies are common for well-connected businessmen. But they are no guarantee of quality. For Olympic athletes arriving this month, Carvalho delivered apartments with blocked toilets, leaky pipes, and exposed wiring.

Of all the contradictions between Olympic vision and reality, perhaps the most glaring is in Carvalho’s choice of partners, the construction firms Odebrecht and Andrade Gutierrez. These companies are at the center of the multibillion-dollar corruption scandal that has plunged Brazil into political chaos, and investigators now believe they skimmed bribes from Olympic projects, too. Both companies are cooperating with investigators. As recently as May, Paes surreally claimedthe Olympics were free of corruption, even though his own party is deeply implicated in the wide-ranging bribery scheme.

And the Olympics golf course, Cuadros discovered, was constructed by a wealthy businessman on stolen public lands and in what had formerly been an environmental protection zone where construction was forbidden. The area was deemed no longer a protected zone when a nearby sand-mining operation was found to have “degraded” the ecosystem. The sand-mining operation was owned by the same businessman who built the golf course.

Cuadros also reported that more than 20,000 residents of the city’s favelas have been removed, their homes demolished, to make way for roads and Olympics stadiums.

In São Paulo, a competing rally drew crowds calling for workers’ rights and an end to the right-wing takeover of Brazil’s federal government.

The Senate is expected to vote on whether to impeach Rousseff in late August.

Last week, protests in Rio were more locally focused: the Brazil chapter of rights group Amnesty International displayed 40 body bags in front of the office of the Local Organizing Committee for the Olympics to draw attention to the city’s fatal police shootings, which have increased significantly in the months leading up to the games.

“Since April, Amnesty International has been raising concerns around the increased risk of human rights violations in the context of Rio 2016 Olympics, as it happened before in other mega sporting events such as the 2014 World Cup and the 2007 Panamerican Games,” the organization noted. “Since 2009, when Rio won the bid to host the Olympics, more than 2,600 people were killed by the police in the city.”

Renata Neder, human rights advisor at Amnesty International, commented: “Brazil failed to learn from past mistakes. In the month of May alone, 40 people were victims of homicides committed by the police, a 135 percent increase in comparison to the same period in 2015. These numbers are unacceptable and compromise the Olympic legacy.”

Indeed, as political and environmental turmoil threatens the Rio Olympics, Cuadros observed in The Atlantic that “perhaps the best Olympic legacy that Brazilians can hope for is that the event will serve as a cautionary tale to future generations.”