The Right Water Debates in the Wrong Place 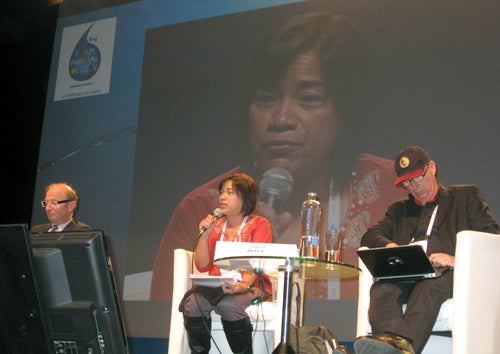 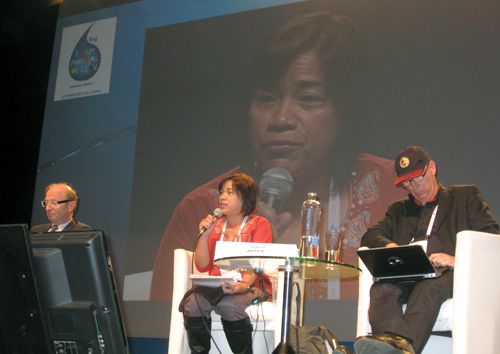 The World Water Council, the convener of the World Water Forum, sure knows its market. At their recent global gathering held in Marseille, France, they tapped into the thirst of governments, development agencies and banks, NGOs and private water operators for a conversation about water services and managing the growing water crisis—as well as a shot at lucrative contracts. Exhibition booths included desalinization companies and private firms like Suez and Veolia, the biggest in the industry. The event had the feel of a trade show and the price tag of the Superbowl, dissuasive to thousands of water justice activists who set up a parallel, alternative peoples’ water forum in a dock-side warehouse.

Where is UN leadership on water? A Crisis of Water Governance

The first World Water Forum was held in 1997; the sixth concluded in March 2012. The World Water Council is a private, not-for-profit body with a board weighted towards private water industry representatives and government officials friendly to private water management. The United Nations (UN) might appear a more sensible host for a global conversation about world water policy—water troubles are felt locally but the hydrological cycle is turned topsy-turvy globally. Human rights and environmental activists who steered clear of the forum advocate to move it to the UN. The same opinion was whispered to me by a forum session facilitator, “but if we say it out loud, this party is over.”

One obstacle to this shift is the approximately 27 UN agencies that deal with water. This bureaucratic dispersion mirrors the way most governments back home split administration of water matters. There tends to be one agency administering potable water, another issuing water permits to mine operators, a third overseeing sanitation and no one watching out for watershed protection. Unlike, say, the World Health Organization (WHO), there is no central UN agency for global water. No one leads; into the vacuum steps the World Water Council.

“Would you have a pharmaceutical business federation run the world conference on health?” Pedro Arrojo, 2003 Goldman Environmental Prize winner asked at a non-Forum meeting of civil society organizations and governments. “It would be unthinkable.” Which is not to say that there wasn’t concern about the UN. Its track record on water is far from stellar. It’s true that the General Assembly did approve the human right to water and sanitation in 2010, but that right is already being eroded in Rio plus 20 draft documents. In 1997, the UN approved the Convention on Non-Navigational Uses of International Watercourses, but 15 years later it is still stalled, awaiting implementation. Were the UN to convene the global water gathering, civil society participation might be buried in observer or consultative status. Communities affected by say, a large dam, might have trouble making their voices heard. This is at least partially due to disproportionate influence of the private sector as documented in the Blue Planet Project study, A Review of Private Sector Influence on Water Policies And Programs at the United Nations.

So much public water, so little discussion of public management

A barker handed me a flyer that caught my eye, “Improving Governance and Performance of Public Water and Sanitation Services.” Finally, I thought, a conversation about how public utilities can provide a better service. Halfway to the workshop, I read the finer print: the session would discuss how Algiers public authorities contracted with Suez Environment—improving public water by going private.

How do you explain this disproportionate focus on private water services if, as Gerard Payen, president of the private water operator’s federation, Aquafed, states, only 10 percent of water systems are privately run? The answer, it seems, is equal measures private entrepreneurism and public cowardice. Put yourself in the shoes of a public official surrounded by propaganda alleging public sector inefficiency. Is providing water to your constituents giving you a headache? Is the water workers union making your life miserable? We are here to help. Friends at development banks can train you to set contract benchmarks—as they condition loans to require privatization. Public authorities squeezed by fiscal crises may be happy to get water operations off their books. Heck, if transparency is opaque, they might even reap some personal gain.

There was grumbling at the forum that the public-private debate distracts from ensuring water to the billion plus people without. Isn’t there a role for private enterprise in this urgent and giant undertaking? On that, there’s agreement; what’s in question is the private sector’s best role. Advocates for managing water as a shared public commons express concern that private providers and markets may not serve the best interests of the next seven generations—their measure of forward-thinking water management. The Center for Public Integrity’s recent failing grades to states for corruption suggests pause in relying on public-private partnerships to implement the right to water. Sure, public utilities need training to improve performance, but enforcing a public contract with a private operator requires new skills as well. And public accountability to improve performance doesn’t exist in places like Jakarta where civil society groups have battled long and hard just to obtain a copy of the durned contract. Private operators have been reluctant to deliver water to neighborhoods where full cost recovery is tough. It’s hard to see how source and watershed protection—requiring expensive engagement in complex political processes—squares with a private operator’s bottom line. Yet these are essential practices for water management in a world of growing water scarcity.

Bizarrely, water utility workers were marginalized at the Forum. Public Services International, a federation of public sector trade unions with affiliates in over 140 countries knows a lot about water delivery. They make sure it arrives in millions of homes and would seem a good constituency to involve in discussions about how to manage water better. Yet they were relegated to “side event” status, paying 598 euros to host a non-official session for one hour.

Whereas the World Water Forum had a corporate vibe, the alternative forum, FAME, felt like an Occupy event. Alex Kastrinakis, paced the stage agitatedly, describing a fast-moving Greek tragedy. The Greek government is holding a fire-sale, auctioning off Thessaloniki’s water system for a paltry 74 million euros. In 2011 it made more than 20 million euros. Movement 136 aims to involve citizens in water governance by buying the utility as a consumer cooperative at 136 euros per household before it is sold to a private bidder.

Without question, the drum-beat at FAME was beating back privatization and shaping the right to water into something tangible for thirsty families. At the same time, an Andean farmer described community water management and stewardship: how farmers manage a centuries-old irrigation system. Our Water Commons presented the case of the NYC Water Authority as a far-sighted example of city officials and upstream farmers co-designing a watershed-friendly agricultural program and financing it through consumer charges.

The Municipal Services Project launched a new case study publication entitled Alternatives to Privatization, investigating public options for essential services. Spokespeople for communities affected by mining—including in environmental champion Bolivia—painted a frightening picture of water abuse by extractive industries and described a crisis between economic growth and environmental protection/justice. UN Special Rapporteur on the Right to Water and Sanitation, Caterina de Albuquerque alerted advocates that the UN right to water was being diluted in the World Water Forum’s Marseille declaration. When the microphones quieted, out on the street under the stars, a bearded conductor led a honk band through trombone solos and acapella riffs.

To be fair, even if tainted by water privateers, the World Water Forum was more than a trade show; there were important debates. Dr. Rafiq Al-Husseini, from the Secretariat of the Union for the Mediterranean rejected full cost recovery from households and insisted that larger users (agriculture and industry) pay their full share. Other speakers suggested that free basic water ought to be as normal as free basic education, financed through cross-subsidies. The elephant in the room was that recovering higher tariffs from agribusiness and industry likely means higher prices on a range of products—but at least poor households won’t be unfairly picked on. Pricing was a theme notably thin at FAME; water and money still seem to remain something of a no-go zone among many human rights advocates which opened them up to criticism that they don’t have workable proposals for financial sustainability of water systems.

At a high level panel on water and food security co-organized by the UN Food and Agriculture Organization (FAO), panelists proposed supporting small-scale agriculture through recognizing their resource rights, offering public credit, devolving governance of irrigation water regionally and funding small farmers for their watershed stewardship work. Other sessions took up how to implement the right to water and Anne Le Strat, Paris’ deputy mayor, shared lessons about Paris’ experience in re-municipalizing their water services. Although these conversations were few relative to the number of pro-privatization sessions, there are clearly bridges to be built between FAME and World Water Forum participants.

At both forums, public participation was a kind of water management mantra. There wasn’t disagreement as to whether participation was valuable, just skepticism that it’s often just window dressing. So-called multi-stakeholder dialogues can be monologues between political unequals that don’t crack open decision-making.

The alternative to pro-forma consultation is something more dynamic—getting community hands muddy in monitoring water quality, debating pricing at public hearings and mapping water sources with utility workers. This engagement is sometimes described as exercising water democracy and water citizenship. But here’s the rub. Water is embedded in everything. It’s essential to public health, a key input for manufacturing and food can’t be grown without it. Water democracy means democracy. Period. The sorry state of our water underscores fundamental weaknesses in national democracies and the UN system. Achieving water democracy is surely a terrific opportunity to fix governance problems from the local to the global, but it’s one enormous task. The drift towards elite private global governance doesn’t help—the World Economic Forum in Davos is a case in point. With water so central to the economy, it’s not surprising that self-interested parties seek governance of water for private gain.

Rio plus 20 is the next big global water debate and test of water democracy. As a binding UN conference, it is much more significant than the World Water Forum. Will Rio be a step forward or backward for the kind of water governance and management consistent with future generations’—of both people and nature—needs? Climate change has policy makers frightened and ecologically-based planning gets an occasional nod. But early indications are that the draft Rio declaration backs away from the human right to water and looks to markets to resolve the water crisis.

The water commons is rising—alongside a view of water as a green commodity to be bundled like mortgages and traded on financial markets. The much desired win-win is hard to find between these divergent views. Chances are that some water practices, fracking for instance, can’t be reconciled with a safe water future. Some energy companies and politicians will surely be unhappy when a world wide ban on fracking is won or when the Keystone pipeline is finally killed. The good news is that good water management is not rocket science—former New York City Director of Water and Sewer, Albert Appleton, said it simply, “a good environment makes good water.”

There are a lot of smart and unrecognized water commons champions out there—from local mayors to utility workers to public agency bureaucrats to small farmer organizations. Adhering to basic human rights and ecological principles—and shouting until we’re hoarse at Rio and beyond—we might just weather the storm.