The Research Is In: Regulations Alone Won’t Save Us From Climate Disaster 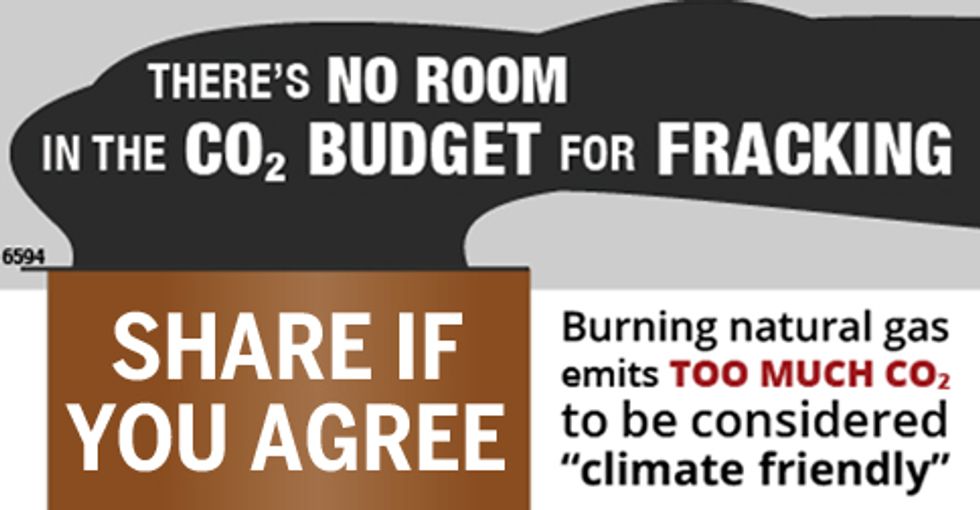 We are convinced that any serious attempt to address climate change means that a large portion of the natural gas, oil and coal currently locked underground must remain unexploited. Unfortunately, rather than aggressively deploying renewable energy resources, the Obama administration has opted to allow polluters to continue burning these dirty, polluting fossil fuels. Case in point: The U.S. Environmental Protection Agency (EPA) is due to soon release rules to regulate methane leaks from natural gas production and transportation. But two new reports released this week underscore the importance of keeping fossil fuels where they belong—underground.

This week, Nature published a peer-reviewed paper estimating the percentages of fossil fuels that must remain unburned. This came on the heels of our own analysis of how much natural gas, specifically, should not be exploited.

The Nature researchers based their numbers on a scenario prioritizing the cheapest fossil fuels, weighted (or penalized) by a selected measure of their contribution to global warming. The authors found that in order to have only a 50-50 chance of remaining below a 2-degree (Celsius) temperature increase and avoid catastrophic climate change, about 80 percent of coal reserves, 30 percent of oil reserves and 50 percent of natural gas reserves must remain underground.

However, these percentages were calculated before accounting for “technically recoverable resources,” meaning, that most of the shale gas the industry expects to extract by fracking, was not considered.

Food & Water Watch’s analysis calculated a more conservative “budget” that would provide a 75 percent chance of remaining below the 2 degrees Celsius warming line. Even with ambitious plans for ramping down coal and oil use, this budget is busted by the CO2 emitted from burning fracked natural gas.

In both studies, there’s an implicit budget for methane emissions too, but widespread drilling and fracking would likewise break that limit. The EPA plans to issue regulations for methane leaking due to drilling and fracking, but this industry cannot be regulated properly. Simply put, the Obama administration’s methane regulations are equivalent to putting lipstick on a pig—they address the problem, but they don’t exactly fix it.

Policymakers would like to pretend they can have their cake and eat it too, appeasing the industry’s desire to continue producing, while also saving the climate. But as the research shows, you can’t have it both ways. Food & Water Watch’s analysis looked at what the world can afford in terms of climate change, not dollars. The U.S. is poised to become a world leader on curbing climate change, but for that to happen, we need to implement real solutions, rather than pandering to special oil and gas industry interests and their powerful lobbyists.

In short, both sets of research demonstrate that policies encouraging fossil fuel development and production are bankrupt. The only responsible path forward is to keep coal, oil and natural gas underground. The time has come to aggressively overhaul our nation’s energy system, incentivizing renewable energy and energy efficiency. Rather than supporting conventional fuels through tax breaks and subsidies, we need our leaders to have the courage to forge a real path toward energy security and independence.

Flood Tide for the Climate Movement: How India and California Are Leading the Way