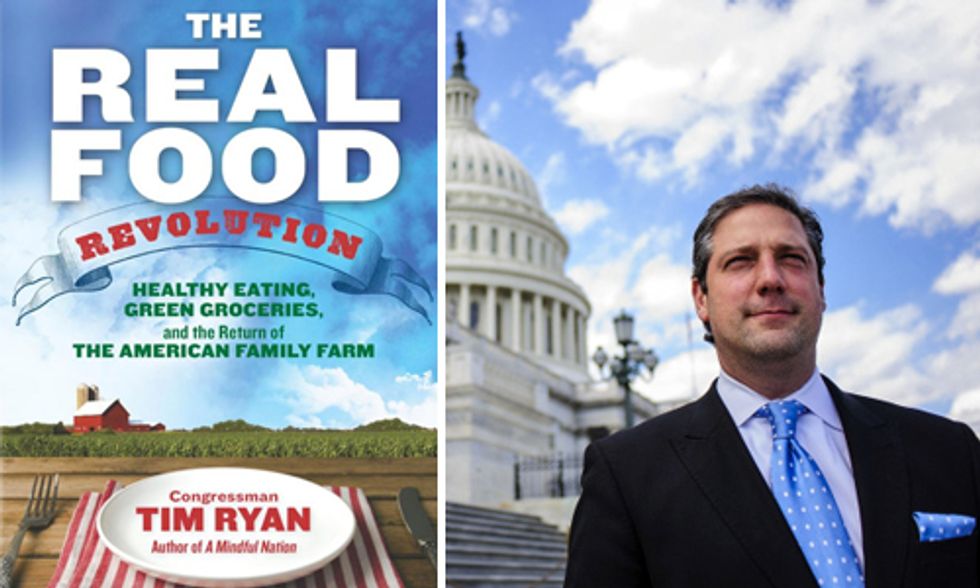 There is one place that nearly everything that matters today in the world converges.

It is our fork, and what we decide to put on it every single day is of utmost importance.

Food and the way we produce and consume it is the nexus of most of our world’s health, environmental, climate, economic and even political crises.

We need a Real Food Revolution, exactly the kind that Congressman Tim Ryan so eloquently, simply and self-evidently describes in his new book.

Listen to Congressman Ryan speak out about the need for the transformation of our food system. He is the first politician in Washington to speak the truth about food.

The harm we do to our bodies is linked in a complex web to the harm we do to the planet; to the degradation of our environment, air and water; and to the future we are stealing from our children. The next time you pick up your fork, think of the personal and global impact of what you put on it.

Never before have we faced the scale of our current global crisis of chronic disease. According to the World Economic Forum, chronic disease is now the single biggest threat to global economic development. It will cost the world’s economy $47 trillion ($47,000,000,000,000) over the next twenty years, more than the annual gross domestic product (GDP) of the six biggest economies combined.

We are also depleting our human capital. Lifestyle caused disease now kills fifty million people a year, more than twice as many than die from infectious disease. Eighty percent of the world’s type 2 diabetics are in the developing world. Twice as many people go to bed overweight as go to bed hungry in the world today. One in two Americans, and one in four teenagers, has pre-diabetes or type 2 diabetes. And, we are raising the first generation of Americans to live sicker and die younger than their parents.

Our children’s future is threated by an achievement gap caused in large part by their inability to learn well while surviving on the processed foods and sugar served in their schools. Fifty percent of schools serve brand name fast foods in the cafeteria and 80 percent have contracts with soda companies. Most schools have only deep fryers and microwave ovens that are only capable of serving up industrial food-like substances prepared by corporations, not by humans.

Our national security is threatened because our young adults are too fat to fight. The President of Spellman College in Atlanta, the first black woman’s college in America, told me that over 50 percent of the entering freshman class has a chronic disease such as high blood pressure or type 2 diabetes. Yet she couldn’t get the soda vending machines off the campus because Coca Cola is a major donor to the school.

We are also depleting nature’s capital—capital that once destroyed, cannot be reclaimed. The threat is not only to our health and our children’s future, but to the health of the planet that sustains us. One acre of arable land is lost to development every minute of every day. One pound of meat requires 2,000 gallons of water and produces 58 times more greenhouse gasses than 1 pound of potatoes. Intensive mono-crop irrigation is depleting our Ogallala Aquifer on the Great Plains 1.3 trillion gallons faster than it can be replenished by rainfall. Three quarters of our fresh water (only 5 percent of all the Earth’s water) is used for agriculture, mostly to grow meat for human consumption. Wars of the future will be fought over water, not oil.

Our industrial animal factory farms produce more climate heating methane and greenhouse gasses and use more fossil fuels than all forms of transportation combined (air, car, ship, train). We are destroying our rivers, lakes and oceans by the run off of nitrogen based fertilizers and pesticides creating vast swaths of marine dead zones.

Lobbyist influence over policy makers has put corporations, not citizens, at the center of every aspect of our food system, from what and how food is grown, to what is manufactured, marketed and sold. Through our national (or lack thereof) food policy which subsidizes, protects and encourages the growth of centralized seed production, mono-crops and industrial practices; allows unrestricted junk food marketing to children; and prevents clear food labeling to help citizens understand if a food product is healthful or harmful, we are systematically destroying both our human and natural capital. More than 50 nations regulate food marketing to children, but in America we allow unrestricted marketing of the lowest quality, sugar-laden foods to our children.

When money rules politics, our agricultural lands, soils and aquifers are depleted through oil-dependent industrial farming supported by billions in federal subsidies. When money rules politics, the very agency entrusted with developing dietary guidelines to protect our health (the U.S. Department of Agriculture) also provides $4 billion in revenues to soda companies by permitting food stamps to be used to buy 10 billion servings of soft drinks a year for the poor.

As a doctor, on the front lines of the chronic disease epidemic, it is increasingly clear that our health crisis, along with our environmental, climate and economic challenges starts with food. Industrial, highly processed, hyper palatable and highly addictive food is the single biggest driver of chronic disease we see today—obesity, type 2 diabetes, cardiovascular disease, cancer, dementia, and increasingly, autoimmune and allergic disorders.

But there is a solution, a solution that Congressman Tim Ryan clearly lays out in The Real Food Revolution. It is a revolution that advocates for important policy changes—such as the decentralization of seed production, transparency in food labeling (including GMOs), and reduction of antibiotic and hormone use—ending subsidies (euphemistically called “crop insurance”) that enrich the agribusiness and subvert small and medium farms that produce real food.

But the real revolution described is this book is local, as local as your fork and what you choose to put on it every single day. As a doctor, it is increasingly clear to me that the health of our citizens, the health of our nation depends on disruptive innovations that decentralize and democratize food production and consumption. I cannot cure diabetes in my office. It is cured on the farm, in the grocery store, in the restaurant, in our kitchens, schools, workplaces and faith based communities.

The science is clear. Food is the most powerful medicine. The majority of illness seen by doctors today is caused by the industrial food system and the nutrient poor, calorie dense, high sugar refined food it produces. And those diseases can only be cured by real, whole, fresh food that will be the result of a Real Food Revolution. And yet doctors have little if any nutrition education in medical schools and are nutritionally illiterate.

Our children learn nothing of the care and feeding of the human body in school and we have raised the first (or perhaps second) generation of Americans who do not know how to cook a meal from scratch. We have eliminated home economics from school. This all needs to change for us to avert the tsunami of disease and the environmental, social and economic impact caused by our current food system.

Innovations and pockets of creativity and decentralized solutions described by Congressman Ryan in this book including policy changes, shifts in medical education, urban agriculture, educating our children about food and more all provide the seeds for the type of transformation needed to solve one of the central problems of our time—the quality of what we put on our fork every day. We have to take back our health one kitchen, one home, one family, one community at a time! Become part of the revolution. Start by getting the manifesto and action plan for a new food system, Congressman Ryan’s transformational book, The Real Food Revolution.

Is ‘Sustainable Beef’ an Oxymoron?