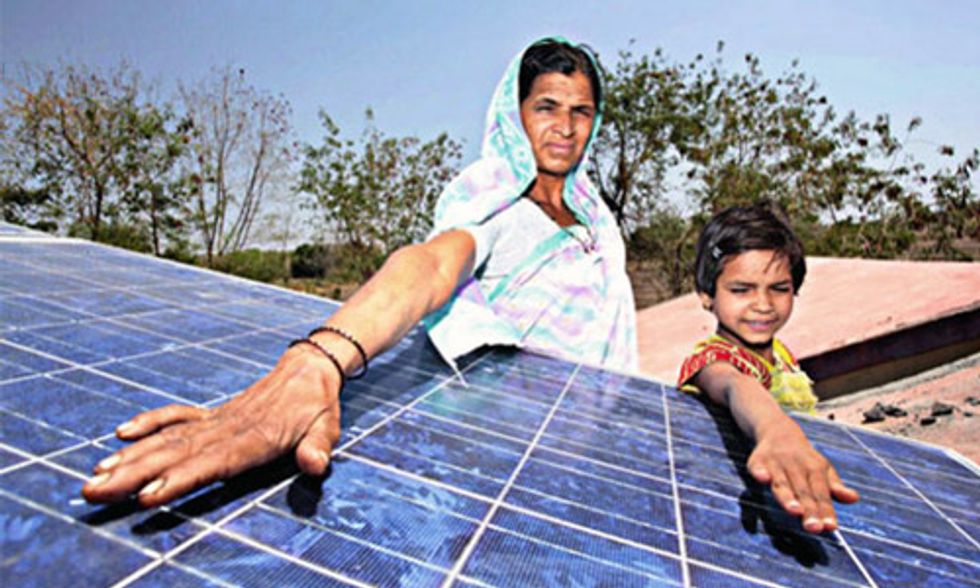 Even the normally cautious Guardian enthused about the signal of global seriousness about climate change evidenced by a record 170 nations signing the Paris accord on a single day and emerging hopes that enough nations might ratify by the end of this year to bring the accord into legal effect four years earlier than originally anticipated. The paper summed up that the signatories had "declared an end to the fossil fuel era," quoting French President Francois Hollande's pledge that "there is no turning back." But the paper ran a simultaneous article signaling the remaining gap between Paris pledges and climate sustainability.

What has not been fully appreciated is the uneven patchiness of global progress in the wake of Paris. The EU, historically the leader globally, was the one major emitter uncertain if it could ratify by the end of 2016, citing its complex multi-national processes, while the U.S., China and India all signaled their commitment to ratification by December. (One of the cited reasons for the urgency, to prevent a possible President Trump from backing out of the Paris agreement, is sadly risible. Trump has signaled his intention of walking away from far more deeply ingrained treaty obligations than those imposed in Paris and in the unlikely event he takes the White House, the impact on the global economy will, in the short term, likely drive emissions down drastically. Meanwhile the major drivers of U.S. compliance with Paris, collapsing U.S. reliance on coal electricity and steadily stronger fuel efficiency standards for vehicles, will be almost impossible for even Trump to reverse).

The real drivers of a low carbon future appear to be China and India.

But the real drivers of a low carbon future appear to be China and India. In the barely three months since Paris both countries have launched a staggering set of initiatives to cut their emission trajectories. China has imposed a floor price of $40/barrel on oil, signaled an intent to cancel 90 percent of the new coal plants awaiting approval, suspended approvals of new coal mines and mandated phase outs of 500 million tons of existing mining operations, cut coal consumption and emissions for the second year in a row. It has now committed to cutting the carbon dependence of its 2020 economy 50 percent below 2005 levels. Its State Grid company has floated a plan for a global renewable energy grid to phase out reliance on fossil fuels, connecting wind power from the North Pole with solar arrays in the Sahara to power human communities in the latitudes in between.

But sweltering in Delhi's hottest April in 5 years, after a national heat wave which has killed hundreds of people across the country with temperatures peaking at 117 degrees a full month before the arrival of the hot season, it's clear that there is no stand-alone climate solution—or conversation—in the developing world.

At the same time that heat kills, air pollution remains at staggeringly dangerous levels. Delhi has imposed odd-even restrictions permitting each car to be driven every other day. To replace the lost mobility app driven, Uber style private buses are being pressed into service, along with electric three wheeler rickshaws, but these meet only a fraction of the need. Car owners are rapidly learning to make more intense use of those vehicles which are on the road each day, so the benefits of the odd-even system are eroding rapidly, as they have when other nations have tried the tactic. India has accelerated the requirements for tougher emission standards for vehicles as part of its Post-Paris action plan, but the clean fuel that would enable further progress is not expected to be nationally available until 2020, so there is no quick fix.

Water is running out all over the country, with the city of Latur becoming a poster-child. Pictures of women climbing down into wells to fill buckets emblemize the crisis. But Latur's problem is only partly drought caused—the city shut off its municipal supply months ago because half of the water was leaking out of the pipes Lack of investment in infrastructure by cities that lack taxing authority is the other piece. India can't cope with climate without urban home rule—nowhere on the horizon (although constitutionally mandated).

The Modi government's Paris pledge—175 GW of renewable power by 2022—was staggeringly ambitious and the government has taken rapid steps to try to accelerate deployment and meet the goal. 2016 set a record for new renewable power brought on line, but the bankruptcy of Sun Edison, a U.S. solar developer that was a major player in the Indian market, has cast a shadow on the flow of investment dollars into the sector. The 40 percent of India's solar development that needs to occur on roof-tops—because there is not enough vacant land for utility scale solar farms—is not growing nearly rapidly enough to meet the targets. Nor has the international community provided the kind of lending liquidity that will be required for India—and other emerging economies—to build clean energy at the scale they promised in Paris.

Meanwhile, President Obama has credibly moved forward on the primary elements of his Paris pledge—cleaning up emissions from the power sector, mandating better performance from cars and trucks and now, in partnership with Canada, confronting methane emissions from oil and gas extraction. But there is no viable U.S. vision of how to move from the 28 percent emission cuts pledged in Paris to the 80 percent 2050 cuts promised by Obama at the beginning of his term. The EU seems largely, frozen by its other crises. Even in the wake of the VW crisis it is reluctant to give up its dependence on the diesel as a half-way climate solution. And Japan is falling back on more coal, defying global trends toward cleaner energy. So three months after Paris we have ambitious but very difficult transformational efforts in China and India, inadequate incrementalism at best in the advanced economies and a lack of global mechanisms to help the rest of the emerging world find a low carbon development pathway.

This is all still staggeringly more hopeful than things looked two years ago—but I suspect that we are only beginning to uncover the complexity of global sustainability in a world of 7 billion aspiring consumers, even as that world grasps that there is opportunity, not just sacrifice, at stake.