The Promises and Perils of Geoengineering 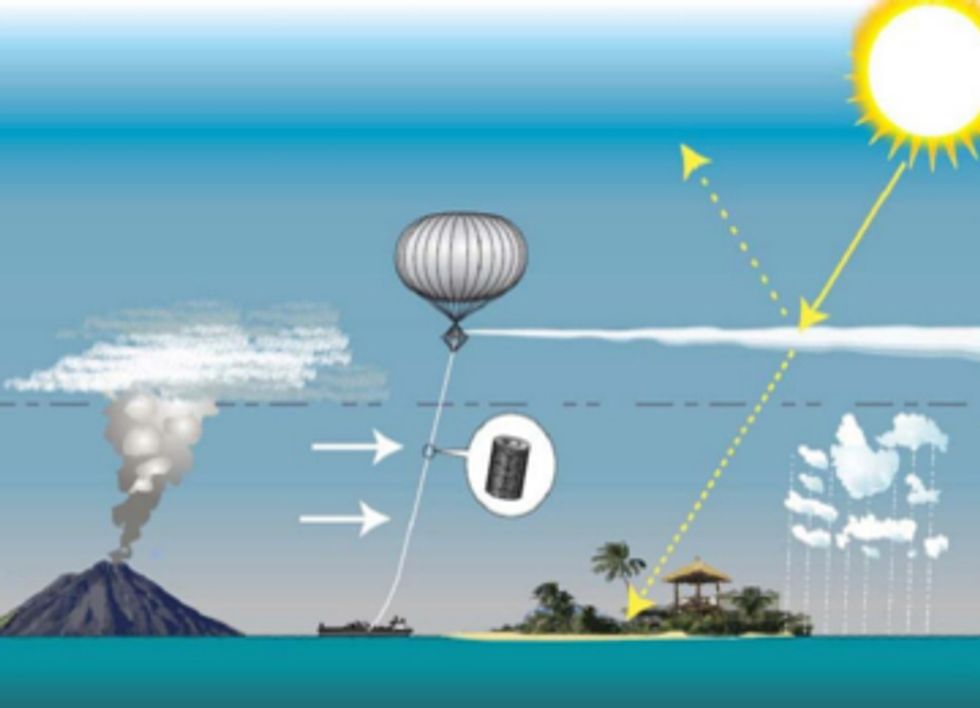 Geoengineering, by definition, is any deliberate large-scale manipulation of the planetary environment to counteract human-caused climate change. As the planet continues to warm, the potential solutions offered by geoengineering are tempting, and several serious projects are actively being pursued.

In the latest edition of the Worldwatch Institute’s State of the World 2013: Is Sustainability Still Possible?, Simon Nicholson, assistant professor in the School of International Service at American University, examines the pros and cons of such an approach to responding to climate change.

The technological prospects for geoengineering are vast, and fall into two main camps:

SRM is a tactic that aims to reflect solar radiation back into space so that it is not absorbed by the atmosphere. The intent is to counteract heat-trapping gases by scattering or deflecting some percentage of incoming solar radiation by, for instance, streaming sulfate particles into the stratosphere or launching sunshades into space.

CDR is an approach that involves drawing large amounts of carbon out of the atmosphere, and storing it where it won’t cause future harm. Land-based ideas have included carbon dioxide scrubbers that would pull large quantities of carbon dioxide straight from the air, or growing forms of biomass and then reducing it to charcoal, which can be buried. Ocean-based ideas mostly involve the cultivation of plankton, which take in carbon from the atmosphere and bring it to the bottom of the ocean with them when they die.

“SRM strategies are receiving the bulk of the attention,” says Nicholson. “It is hard to see a CDR scheme coming online quickly enough or being deployed at a large enough scale to make a real dent in the atmospheric carbon load.”

Yet Nicholson warns that solar radiation management is not any kind of real answer to climate change.

“At best, SRM can reduce the planet’s fever for a period,” he says. “Talk of geoengineering is gaining traction because it has the appearance of an easy, sacrifice-free approach to tackling climate change. It is critically important to recognize that there are sacrifices, some obvious and some harder to spot, associated with the bulk of geoengineering schemes.”

In his chapter, “The Promises and Perils of Geoengineering,” Nicholson outlines some of the consequences that may arise if geoengineering is pursued:

Climate Catastrophes: The most obvious concern is the potential for causing catastrophic and irreparable damage. Even with computer models and endless calculations, there are still potential unforeseen problems that may occur with any such large-scale plan, due to our still limited understanding of the world’s climate system.

Political Dilemmas: Large-scale climate engineering may curtail the will to develop other forms of climate-protecting actions. If changes in the climate affect various parts of the world, the question of who ought to control the thermostat also raises issues. Less influential countries may be left to suffer as world powers dictate climate behavior to their advantage. Militaries may be able to start using the weather as their greatest weapon of mass destruction.

Rogue Actors: In October 2012, an American took a ship off the shore of Canada and dumped about 100 tons of iron sulfates into the Pacific Ocean, in hopes of creating a carbon sink. As threats about rising temperatures increase, it is possible that more individuals and organizations will risk taking the climate’s condition into their own hands.

With outlined principles and public decision making, however, geoengineering does have the potential to become one method to battle climate change. Some scientists have suggested a “soft-geoengineering” approach, in which changes we make are still widespread, but are reversible and predictable. Examples include painting roofs white to reflect sunlight, or building up carbon in soil and vegetation.

“The need is for a middle ground,” says Nicholson. “Not geoengineering as a techno-fix but rather geoengineering as one small part of an effort to steer the world to a state of rightness and fitness in ecological and social terms.”