The Price of Our Fertilizer Addiction 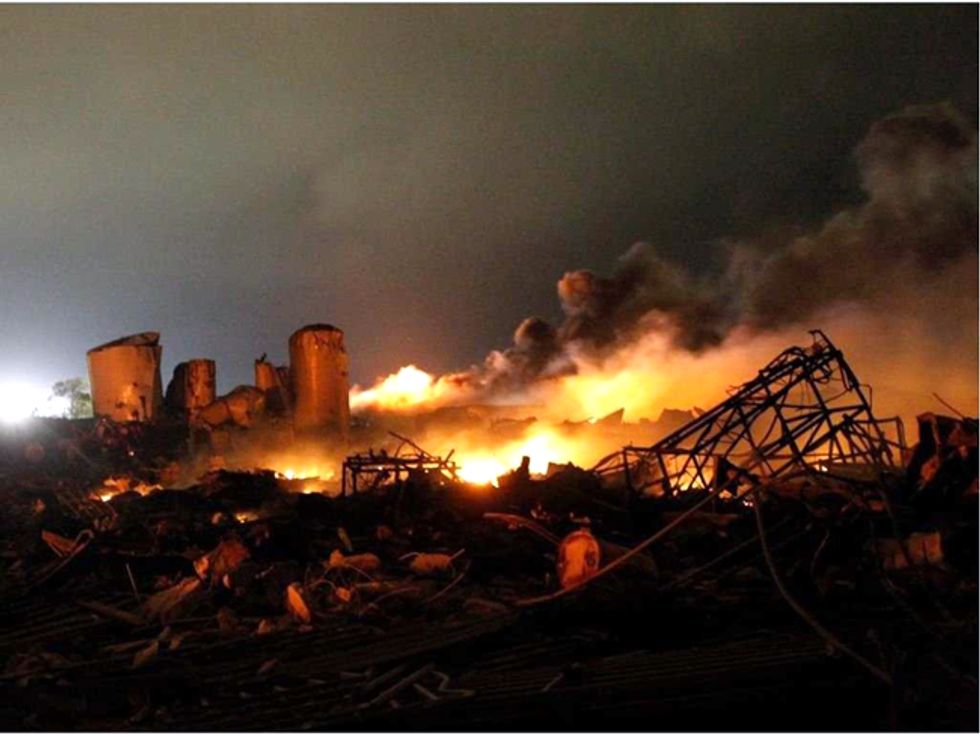 My heart aches for the people of West, Texas, the tiny town where a fertilizer plant recently blew up. Many of the folks who perished in the blast were heroic volunteer firefighters who ran into danger instead of away from it.

On April 17, an ammonium nitrate explosion occurred at the West Fertilizer Company storage and distribution facility in West, Texas.

With 15 dead and 160 injured, and a nearby nursing home, school and apartment complex either badly damaged or destroyed, West’s brave citizens have hard work ahead.

As a nation, we must prevent a disaster like this from happening again. For starters, we can make fertilizer plants safer and locate them away from schools and nursing homes from now on.

This tragedy is even more painful because the factory was making a product—nitrogen fertilizer—that perhaps should not be used at all.

Here’s a big question we should all be asking: Why do Americans use so much nitrogen fertilizer in the first place?

Scientists discovered two centuries ago that plants need nitrogen, a building block of protein, to grow.

Whether you fertilize your soil with manure or with the fertilizer manufactured in the plant that just blew up, you’re adding nitrogen to your soil. Too much nitrogen kills your plants. But without nitrogen, plants can’t grow.

That seems simple. But there’s more to it. Another element, carbon, is inextricably linked to nitrogen. Microbes in the soil need both carbon and nitrogen to survive, and they need them in the right ratios. Add too much nitrogen, and the microbes end up depleting the carbon in the soil as a result.

Of course, plants take in carbon dioxide from the air and convert it to sugars via photosynthesis. So why does it matter if there’s no carbon left in the soil?

Well, the carbon located in the soil allows the ground to retain air and water. Plants need that carbon because they need air and water. Without carbon, the soil becomes compressed and hard. Water can’t penetrate it easily, and instead of seeping deep into the ground, it evaporates. This leaves farmland—and crops—more vulnerable to both drought and floods.

Strangely enough, even though nitrogen-based fertilizer allows plants to grow lush and green, it also weakens their defense mechanisms. This makes farmland, lawns and gardens more attractive to pests.

Plants evolved in the absence of modern fertilizer and pesticides. Believe it or not, they are far more in control than we imagine them to be. I see them as conductors of a vast, microscopic orchestra.

The roots of every plant emit chemicals called exudates that draw microbes to the zone immediately around the roots. The microbes—bacteria and fungi—stay there, feeding off the exudates. In exchange, the microbes provide the plant with nutrients, including nitrogen.

The microbes feed the plant, prey on or compete with harmful organisms and improve the structure of the soil. These microbes are the key to every great natural landscape in the world—and to successful organic farming.

We can maximize crop productivity by putting these microbes to work for us. Instead, “conventional” farmers routinely kill them by using nitrogen fertilizer (ammonium nitrate) that depletes their soil.

Critics of nitrogen fertilizer often compare it to a drug. The first hit feels really good, and your crops grow big and beautiful. But as the microbes in your soil die and your carbon is depleted, you need more and more fertilizer just to get the same yields.

Meanwhile, fertilizer runs off, polluting nearby waterways. And because fertilizer is made with natural gas—often obtained these days via the extreme drilling process known as fracking—it devastates the environment when it’s manufactured as well as when it’s used.

Just like junkies suffer painful withdrawal when they stop taking drugs, a farm addicted to nitrogen fertilizer will experience a drop in yields for a few years once they stop using it. But after five “drug-free" years, a properly managed organic farm can meet or exceed the yields it would have achieved using chemicals.

Compared to the lifetime of grieving ahead for the people of West, Texas, a few years of reduced crop yields is a small price to pay for converting from "conventional" to organic farming.

Visit EcoWatch’s FRACKING and BIODIVERSITY pages for more related news on this topic.