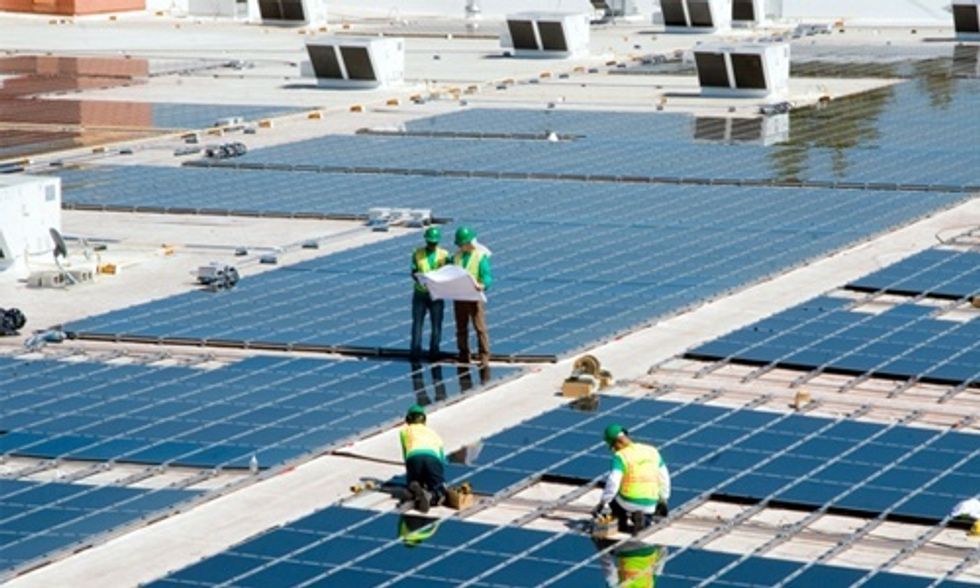 Ever had one of those moments where you turn on the television and stumble onto a show from decades back that you can’t believe is even on any more? If you’re in the U.S., something like Wheel of Fortune or The Price Is Right? (And this is one of those rare instances of universal harmony where every nation has its own version). But there it is, still making the rounds with the host looking as indeterminately aged as ever and an audience dressed for today. And you can’t help thinking, “Wait, people still watch this?”

Here at Climate Reality, we’ve been having a similar thought hearing senators and media pundits rehearse the tired old claim that switching from fossil fuels to clean energy would be economic suicide: “Wait, people still believe that?”

Because—and here’s the key point—the opposite is true. Look at the list of countries making real commitments to clean energy and you’ll see a list of strong economies that aren’t suffering because they’ve embraced renewables like solar and wind power. In many cases, they’re growing—and kind of like Pat Sajak, it’s time to take the Clean Energy Would Kill the Economy show off the air once and for all.

Changing the Channel in 2015

If this myth has been around for so long, why are we focusing on it now? And why this one in particular?

In a word: Paris. Along with everyone else in the climate community, The Climate Reality Project is working to build support for a global agreement to cut greenhouse gas emissions at the UN talks in Paris later this year. If we’re successful—and world leaders make the kind of emissions reduction commitments that can keep warming within safe limits—the upshot is that we’re going to have to scale down our use of fossil fuels as a planet and scale up renewables in a big, big way.

Naturally, the fossil fuel industry sees an existential threat here and has its spokespeople and government supporters making the rounds to claim that any significant moves in this direction would only kill jobs and destroy the economy. Just look at all the hyperbolic invectives against the EPA’s Clean Power Plan we’re hearing here in the U.S., as one example.

These kinds of claims make for great quotes and conspiracy theories, but when you compare them to what’s already actually happening in the world, they fall apart fast. So in the interest of a little truth-telling, over the next couple weeks, we’re highlighting some of the nations showing that clean energy economies work—and work well—beginning with a few that have been going clean and winning for a while.

You might have heard of it. You know, the world’s fourth-largest economy by gross domestic product (GDP), industrial powerhouse of Europe, world champions in soccer/football and home of major companies like Volkswagen, Deutsche Bank and Siemens.

Germany began betting big on clean energy long before it was cool, with the government taking its first significant steps to start a nationwide transition from nuclear power and fossil fuels to renewables back in the early 90s (there’s even a typically long and nearly pronounceable German word for this idea: “Energiewende” (or “energy transition”). The results have been pretty spectacular. Among other highlights:

It’s worth remembering that Germany has continued its clean-energy initiatives in the middle of a global recession and all while remaining one of the world’s greatest economic powers. And it somehow beat Brazil 7-1 in Brazil, which suggests there’s very little Germans can’t do when they put their collective wills to it.

Just across the border, Denmark has been taking a bit of anything-you-can-do-Germany-we-can-do-better approach to clean energy. While the nation isn’t quite the economic powerhouse of its southern neighbor, it has one of the highest standards of living in the world and has seen steady economic growth in the twenty-first century. And it’s done so while also decreasing both its energy use through ambitious conservation measures and its carbon emissions.

No surprise: renewables are a big part of this story, especially wind. The country set a new world record for wind power by getting more than 39 percent of its power from wind in 2014. Then on July 9 and 10 of this year, Denmark generated 140 percent of its energy needs with wind, sending the surplus power to neighboring nations. Plus, just in case anyone ever wanted to accuse the Danish of lacking ambition, the country aims to go from low-carbon to no-carbon and become completely independent of fossil fuels by 2050. No one on staff at Climate Reality knew Danish for “wow,” but it’s clearly time we learned.

For any detractors thinking clean energy can only work in advanced economies in Europe, let’s head over to Costa Rica. The nation has taken advantage of its abundant natural resources to create real capacity in small-scale hydroelectric and geothermal power, with the result it generated 100 percent of its electricity with renewables for the first 113 days of this year. Costa Rica is also developing—and attracting investment in—other areas like solar, wind and biofuels and has committed to becoming carbon-neutral by 2021.

So far, all this focus on renewables hasn’t exactly killed the nation’s economy. Instead, Costa Rica has become an upper middle-income country, experiencing steady economic growth over the past 25 years and the World Bank expects its GDP to keep growing around 4 percent annually for the next several years. Pura vida, indeed.

Admittedly, California isn’t technically a nation—the whole “California Republic” ethos notwithstanding—but this one state has the seventh-largest economy in the world, ahead of countries like Brazil, Canada and Italy. Which makes it a pretty good test case for clean energy in the U.S.—and something of an embarrassment for the anti-renewable crowd.

It may not be The Endless Summer, but there is endless solar. California is shining with #ClimateHope. pic.twitter.com/YfK6RBPioV

So what’s making the Golden State the, um, gold standard on clean energy when it comes to the U.S? The topline here is that through a combination of ambitious efficiency measures, aggressive targets and policies for emissions reduction and a deep commitment to expanding renewables, the state’s been able to do the remarkable and grow its economy without substantially increasing emissions. And not just without increasing emissions, but actually shrinking them by 25 percent per person from 1990—2012, all while growing per-capita GDP by 37 percent in the same period and creating what one report has hailed as the second-greenest economy in the world.

While pulling out all the factors contributing to this achievement would take up a post of its own (if not a book), a few in particular stand out:

Looking at these figures, you have to try hard—really hard—not to reach one conclusion: if the world’s seventh-largest economy can make clean energy work, other nations and states can too. Which gives us a lot of hope looking ahead to negotiations in Paris. You might have heard the saying, “As California goes, so goes the nation.” We sure like the sound of it.