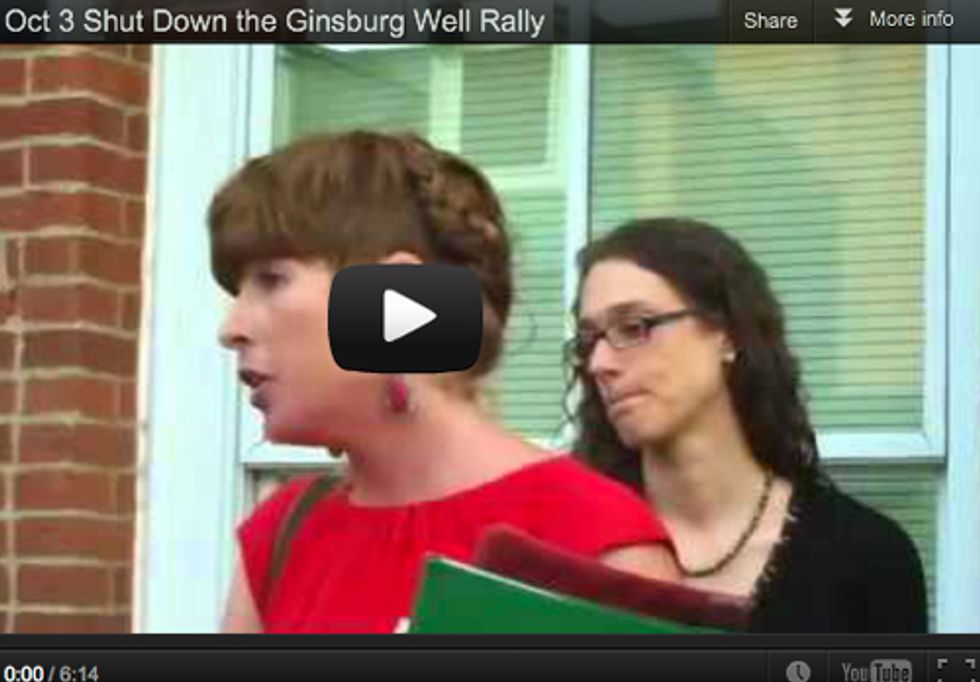 Today, more than 80 people gathered outside the Athens County Courthouse to show support for the legal case of Madeline ffitch, and to demand that the Hazel Ginsberg Injection Well be shut down, a well that has a long history of violations.

Protesters presented a large scale timeline of violations from 1986 to present and held a giant banner that read “Toxic Frack Waste: We Don’t Want It.” Between speakers and Madeline ffitch’s appearance after her meeting with the prosecutor, protesters banged on drums, chanted slogans of resistance and called Ohio Department of Natural Resources (ODNR) representatives to demand that they shut down the Ginsburg Well.

Laura Post—a mother, business owner, and landowner—spoke on behalf of Appalachia Resist! She warned of the grave nature of the Hazel Ginsberg Injection Well and urged everyone to “value our land and children, they are the real investments of our future.” She also asked that people call the ODNR and demand the well be shut down.

Also on hand was Marilyn Hunt, a resident of Wetzel County, WV, who spoke of “clustered cases of leukemia in Butler County [WV]” since fracking has come there. Hunt called for more civil disobedience, saying, “… wild animals, farm animals and people are getting sick.” She warned of polluted aquifers miles away from drilling sites and shamed companies for lying about contaminations. “What people are being exposed to is a cocktail of carcinogens,” said Hunt.

At 2:30 p.m., Madeline ffitch exited the courthouse and announced that she had pled out of a felony charge of “Inducing Panic.” Her legal counsel negotiated a deal which will allow her to hold a misdemeanor charge of trespassing in abeyance for one year, after which the charge will be dismissed, as long as she completes a voluntary diversion program. Madeline was also asked to pay restitution, which her legal counsel negotiated down to half of what was initially asked for. Last week, Judge Ward ruled with the prosecution, ordering that Madeline not be allowed to engage in legal protest during her trial. Her legal counsel felt certain that the judge would also rule with the prosecution to disallow anti-fracking or injection well evidence to be used as part of her defense.

After her court appearance, ffitch addressed the crowd outside the courthouse, thanking everyone for their support, and saying:

“I believe that the inducing panic statute is unconstitutionally vague...I believe that in this case, the first case of direct action in SE Ohio against injection wells, this vague statute was used to make an example of me, and to attempt to deter other protesters. I am proud to say that our community immediately responded to this with unequivocal outrage...When it comes to protecting our water and our lands, this community will not be deterred, and we will not keep quiet. If the prosecutor thinks that grossly overcharging for civil disobedience is going to stop the strong tide of resistance in Appalachian Ohio, if he thinks that future anti-fracking protesters will be deterred by such intimidation tactics, he is wrong. On the contrary, we are picking up speed, we are gathering momentum, and we are ready to fight.”