The Meat Atlas: Facts and Figures About Industrial Food Production 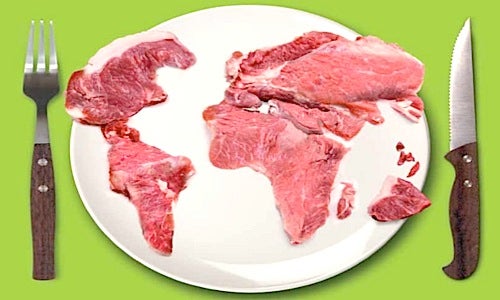 They say every cloud has a silver lining, and since the horsemeat scandal in 2013 it has become much easier to talk about meat—more people seem to know and care about the impact of meat production and consumption and the benefits of cutting down. They’re increasingly keen to do their bit and politically speaking meat is a hot potato.

With more stories in the news about the negative impacts of industrial meat—pollution, dietary diseases and farmers losing livelihoods and lands—the topic is also becoming somewhat of a media darling. Over Christmas there were several articles about eating less meat in 2014 (or going flexitarian) for health or environmental reasons or to save money.

Now we have another tool to help in the debate: The Meat Atlas. This unique, graphic and highly accessible new guide examines the many aspects of the global meat system—from water pollution to gender equality and from obesity to antibiotics. It includes data on, for instance how much public money is spent on livestock (in billion dollars): 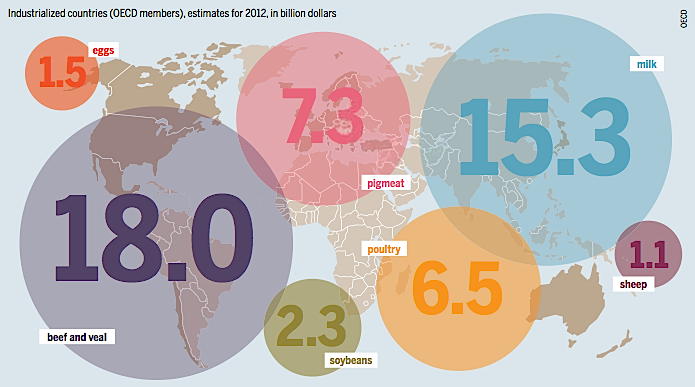 The Atlas illustrates clearly that how we produce and consume meat and dairy needs a radical rethink. Our industrialized production system is untenable, since it depends on scarce land and water resources, and passes on hidden costs to the consumer. Curbs on corporate control over food need to be implemented, it says, to reduce the impact on society and the environment.

In addition to concise articles and topical case studies, The Atlas contains more than 75 colorful graphics to help you see how meat is produced around the world.

Magda Stoczkiewicz, Director of Friends of the Earth Europe, says in her introduction:

This publication sheds light on the impacts of meat and dairy production, and aims to catalyze the debate over the need for better, safer and more sustainable food and farming.

We hope to inspire people to look at their own consumption, and politicians at all levels to take action to support those farmers, processors, retailers and networks who are working to achieve change. We as a species need to be smarter.

And one thing is clear from The Atlas—there needs to be and actually is another way. Livestock can lessen poverty and enhance equality and many initiatives show what a different type of meat production might look like—one that respects environmental and health considerations and which provides appropriate conditions for animals. Consumers are already chosing to eat less and better meat in many parts of the world. 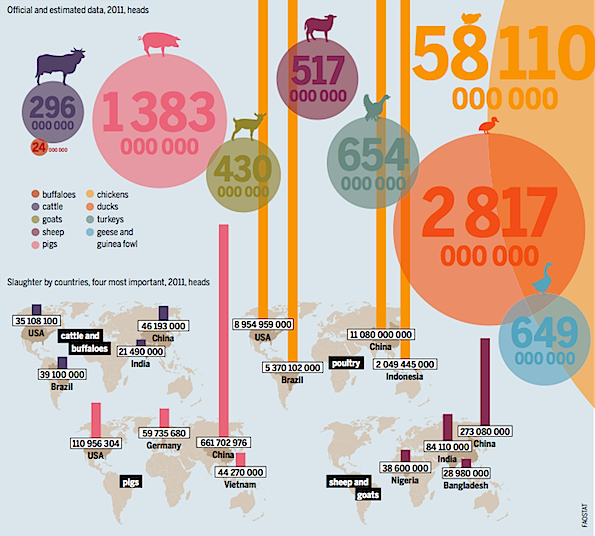 There is a major role for the food industry, consumers and governments here. The UK government must acknowledge the need for urgent action and set up a strategy which will set targets for sustainable diets, research mechanisms to help the changes to happen, and provide clear guidance and standards to promote eating less and better meat.

The debate for better, safer and more sustainable food and farming has already begun, if you want to join in and find out more about meat production around the world, take a journey through The Meat Atlas.