The Long, Hard Road Ahead to Reach Climate Agreement in Paris 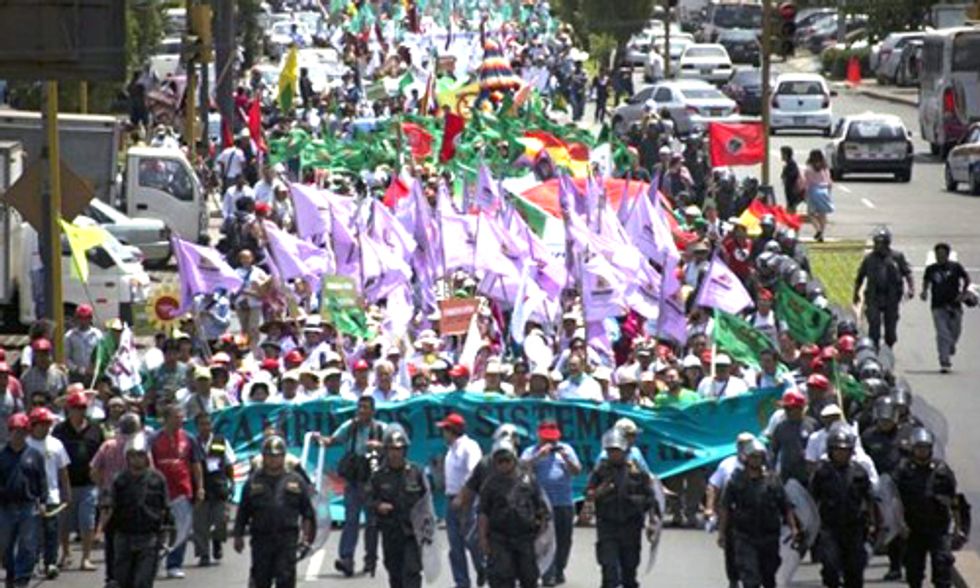 With yet another United Nations-hosted climate change conference making very little real progress, a near miracle will be required if countries are to reach a meaningful and binding global agreement on carbon emissions in Paris next December.

If the world is to have a meaningful climate change agreement 12 months from now, countries will need to overcome some enormous challenges. Photo credit: Congo Basin Forest Partnership

The ‘Lima Call for Climate Action’ document, agreed to on Sunday by 194 countries, is not a new “deal” for the climate. It is a 12-month work plan leading to COP21 a year from now.

The major change—a victory for rich countries—calls upon countries with rising economies, such as China and India, to take action on climate change in much the same way rich countries will contribute.

In another setback, developing countries gave up on a 20-year disagreement that had caused considerable animosity between South and North. Rich countries will no longer be expected to carry the burden of cutting carbon emissions in the South with contributions of $10-billion a year to underdeveloped countries.

One of the very moves forward was a promise that countries already seriously threatened by climate change—such as small islands being swallowed up by rising seas—will receive special compensation for their losses.

Following the meetings, which had to be extended by two days to reach any sort of an agreement, the European Union said “we are on track to agree to a global deal” at the Paris summit. Even so, officials admitted that decisions put off concerning a great many issues will lead to difficult discussions next year.

Many nongovernmental organizations (NGOs) are angry over what they see as a lack of progress. A frustrated Sam Smith of the World Wildlife Fund said that “the text went from weak to weaker to weakest and it’s very weak indeed.”

NGOs warned the plan was not nearly strong enough to limit warming to the internationally agreed limit of two degrees Celsius above pre-industrial levels. Already more than seven-million people, mostly in developing countries, are dying prematurely yearly from pollution.

If the world is to have a meaningful climate change agreement 12 months from now, countries will need to overcome some enormous challenges.

It is hard to see how developing countries will be satisfied with what is likely to happen in Paris. The concessions they made in Peru means they face a larger share of responsibility for fighting climate change.

The South had been hoping to receive $10-billion a year from the North for 10 years to a total of $100-billion, the commitment was removed from the table in Peru.

Twenty or 30 years ago, the United States and European countries likely would have been willing to provide several billions a year to poor countries, but now practically every so-called rich country is broke. The U.S. has committed the largest amount, but even that's only $3 billion.

Northern countries reiterated in Peru they expect the South’s major emitters to begin cutting back on carbon emissions. But this is unlikely to happen any time soon. China and India, the two biggest polluters in the South, say they will need to burn millions of tons of coal in the coming years so they can develop their economies.

The public interest group Corporate Europe Observatory (CEO) says that powerful multi-national corporations played a big role in making sure that the conference did not meet the expectations of many people present. They say that companies and their lobby organizations convinced western governments that if stronger emission controls were introduced many thousands of jobs would be lost.

To the shock of many participants, Shell Oil was permitted to speak at the main session about its preferred way of fighting carbon emissions—carbon capture and storage (CCS), a still unproven technology. Another oil giant, Chevron, was permitted to sponsor side events inside the negotiations.

No wonder the energy giants want to block emission regulations. A well-researched study released in September 2013 found that just 50 corporations were responsible for 73 percent of the greenhouse gas emitted by the world’s 500 largest companies. Of the carbon-polluting corporations the most egregious offenders were within the energy sector and, as a whole, these companies were doing little to change their ways.

NGOs kept on the sidelines

10,000 march in the streets of Lima, Peru demanding a strong climate agreement.

Eighty-two NGOs and one International NGO were accredited as observers at the conference. The various drafts of the agreement were negotiated in secret, and any party making a statement was kept to three minutes.

NGOs had so little status in Lima that they had to get approval from the UN for the slogans placed on their protest banners. Neither countries nor corporations were allowed to be named on the banners. A march by 10,000 protesters had no impact on the proceedings.

Several other broader issues contribute to the lack of progress in combatting carbon emissions. Civil society in the U.S. is often a leader in the world, but the environmental movement appears to have lost the battle for the hearts and minds of Americans. The false claims of climate change skeptics have damaged the will of many Americans to tackle climate chaos.

Another problem is that mainstream U.S. media, instead of seeking out the truth about the dangers of carbon emissions, has confused the public by publishing articles expressing both points of view. But in Europe, where climate change is a bigger issue, The Guardian newspaper refuses to carry climate change denial material.

The weaknesses of the U.S. protest movement means there is not nearly enough public pressure on the government to make it move.

Countries to report by March

Looking ahead to next year, the Peru agreement calls on countries to show by March how they will cut carbon emissions, but there’s no penalty if they fail to do so. If they receive enough detailed information, the UN will then see if the pledges will be enough to limit climate warming to two degrees Celsius. But scientists are already saying projections will be above the two-degree target.

Given the track record of most countries of holding back on climate change commitments, it’s likely the UN and all 194 countries will be operating in crisis mode again next year.

For now, the delegates are returning home to get some well-deserved rest. But they can be expected to be back working hard within a few days in their effort to try and pull off a miracle 12 months from now.

Nick Fillmore is a Toronto freelance journalist and blogger who specializes in climate change and financial issues. He worked in several capacities at the CBC for close to 30 years, and is a founder of the Canadian Association of Journalists. He can be reached at [email protected]