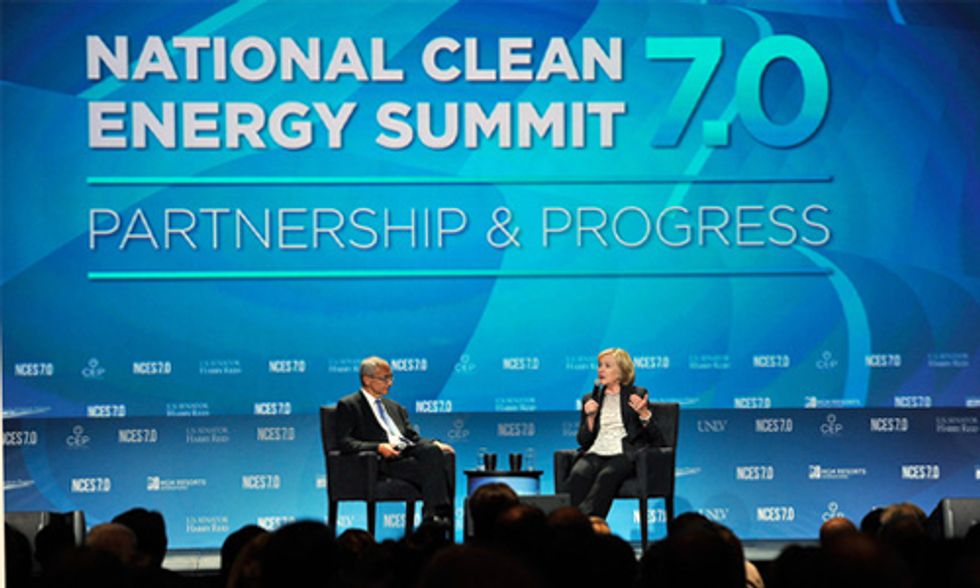 According to the media, the 2016 Presidential campaign began in Las Vegas, Nevada last Thursday with the 7th Clean Energy Summit, an energy gab-fast honchoed by Senate Majority Leader Harry Reid, the Center for American Progress and the University of Nevada.

The opening gambit was Hillary Clinton’s speech to the summit laying out the broad outlines of her energy and climate vision, immediately challenged by Kentucky Senator Rand Paul who attacked her on Fox for calling climate, not ISIS, the biggest threat facing us.

"The data is unforgiving," the former New York senator and first lady said to a standing room crowd "No matter what the deniers try to assert. Sea levels are rising. Ice caps are melting. Storms, droughts and wildfires are wreaking havoc."

Paul’s salvo is a shockingly low bar for a Presidential campaign opener, (however appalling and disruptive ISIS is, the U.S. military is easily equipped if the country chooses to crush it). We all know that things are likely to go downhill from here. That aside, Clinton’s speech bears examination. She broke no new ground, unsurprisingly, since most of the energy and climate issues facing the nation are ones she either voted on in the Senate or confronted as Secretary of State. She called for the U.S. to resume its clean energy leadership, and defined climate as a must-face threat.

"The data is unforgiving," the former New York senator and first lady said to a standing room crowd "No matter what the deniers try to assert. Sea levels are rising. Ice caps are melting. Storms, droughts and wildfires are wreaking havoc."

"The threat is real but so is the opportunity.”

But her framing distinguished herself from both her husband’s approach and that of the Obama Administration. She placed climate solutions—the clean energy innovations that were the centerpiece of the summit—at the heart of a vision of reviving American manufacturing, and of creating “good jobs for workers without college degrees” language not often heard on a recent Presidential campaign. For a classic free trade advocate she was surprisingly cautious about the idea of oil and natural gas exports, saying they offered geopolitical promise but only if they could be managed to ensure that the U.S. kept its energy price competitive edge. Environmentalists winced at her resorting to the “bridge to a clean economy” metaphor for natural gas, but she unequivocally said “we should not drill where the risk is too great.”

But the most interesting thing about her speech may be the tactics used in an apparent effort by Nevada’s Republican Governor, Brian Sandoval, to draw media attention away from Clinton. Sandoval scheduled his own big news at exactly the same time in Carson City. Sandoval’s announcement was that Nevada had won the multi-state competition to be the location for Tesla Motor’s Gigafactory, an enormous $5 billion project to take lithium ion battery manufacturing to an entirely new level. So the news battle was clean energy vs. clean energy.

Sandoval persuaded the Nevada legislature, motivated by the 6500 manufacturing jobs the factors would create, to commit tax breaks worth $1.2 billion to land the deal.  Sandoval conceded that there were concerns about the size of the incentives—but promised that the Gigafactory “would change Nevada forever.” So Nevada is now joining California, Michigan and Indiana as states that have placed major economic development bets on the electric car and its associated technologies, batteries in particular. What’s striking is that these decisions were made by a mix of Republican and Democratic governors, and that Sandoval was not the only Republican seeking to land Tesla—Texas Governor Rick Perry drove to California to make his pitch.

But given the population of Nevada, this bet is by far the biggest any state has placed—every resident will eventually have $750 effectively invested in the Gigafactory and Tesla. With Nevada having (per capita) the largest renewable electricity sector in the nation, the Silver State has stepped up to the challenge that ex-President Bill Clinton made to Nevada at the second Clean Energy Summit five years ago, “to become the first self sufficient clean energy state in the nation.” And, as Reid pointed out, almost all of this was made possible by a medley of federal energy policies: the production tax credit for wind, the new renewable transmission priorities that Reid and former FERC Commissioner John Wellinghoff championed, and the Republican-derided loan guarantee program under Obama’s Recovery Act.

My bet is that 2016 will be the last campaign in American history in which conservatives will reflexively ignore the economic interests of their voters by routinely attacking clean energy as a left wind boondoggle. I don’t say this because I expect the Koch Brothers to change the strings they attach to their campaign largesse, nor because I expect sudden twinges of conscience to sweep the Republican National Committee.

The reality is that the clean energy sector of the economy has grown so fast, and employs so many workers, that waging a war on Tesla, solar power and wind turbines is on the verge of amounting to political suicide. Not only Nevada, but must-have Republican states like Iowa and South Dakota now get more than 25 percent of their electricity from renewables. The solar industry now employs more than 140,000 workers, 50 percent more than the number of coal miners in the whole country. And by its nature, political suicide cannot become a habit.