The Legacy of Mercury Pollution in California's Bay Area 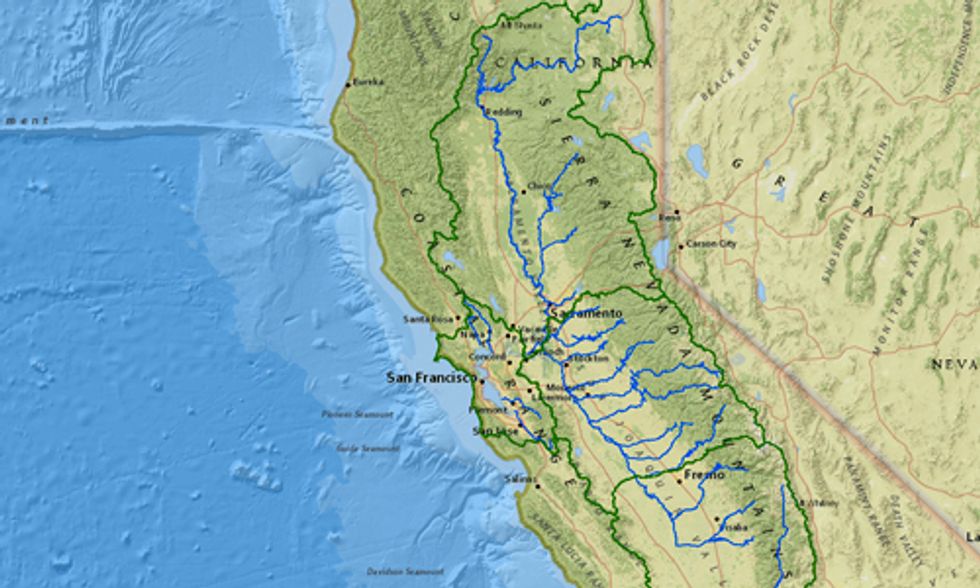 Sigi Ocker is a senior at The Urban School of San Francisco and is attending Whittier College in the Fall. Sigi finds interest in Evolutionary Biology and Environmental Science and will likely pursue a degree in one of these areas.

California Bay Area fishermen are losing business due to increased awareness of mercury contamination in their fish. Members on the lower end of the socio economic class spectrum are complaining about clean fish availability and soaring prices of fish. The Bay Area is experiencing the full effect of mercury accumulation in the Bay’s aquatic sediment and marsh-land zones.

Mercury, upon reaching aquatic systems, is converted by marine bacteria to methyl-mercury. Methyl-mercury is a neurotoxin that biomagnifies, or increases in dosage, as it works its way up the aquatic food chain. So, as bigger fish eat mercury saturated smaller fish, the bigger fish’s tissue then becomes stained or sown with the methyl-mercury. By the time these higher trophic level fish are consumed by humans, the neurotoxin has then biomagnified to an extent that makes it volatile and harmful to any organism’s nervous system. The adverse effects of methyl-mercury include: Fetus development issues in pregnant mothers, possibility of impaired neurological development or impaired brain development. Effects also include problems with cognitive thinking, memory retention, attention span, and motor and visual spatial skills.

So what’s causing mercury to accumulate in the Bay Area?

Mercury is a rare, dense, Earth metal that naturally occurs in the Earth’s crust. While it is a liquid at room temperature it quickly evaporates once exposed to the atmosphere. Because of these evaporative qualities its usage in industry has contributed to its wide spread presence throughout the atmosphere. When referencing industrial use of mercury, it's easy to point the finger at the environmentally damaging use of coal and its combustion.

Coal only has small trace amounts of mercury in it however, but the U.S.’s large reliance on coal as an energy source means that large volumes of coal are combusted for usable energy. The U.S. in 1995 alone, through the combustion of coal for energy, released a whopping 50 tons of mercury into the Earth’s atmosphere. And according to the California Water and Science Center, North America emitted almost 70 tons of mercury to the atmosphere through oil and coal combustion in 2005. In the global arena China was responsible for 295 tons worth of a mercury emissions in 2010, only a portion of the global total 890 tons.

Globally, oil refining and coal combustion contribute to an atmosphere polluted with mercury however, in the Bay Area most of the mercury deposits in marine sediment come from California’s coastal mountains ranges. The affect is less atmospheric and more aquatic as most of the mercury washing down from the watershed has been converted to methyl mercury by bacteria in the Bay Area’s wet-lands and marshes. In the coastal ranges mercury is found naturally in hydrothermal systems. These naturally occurring hydrothermal springs where once used in commercial mining.

The industrial age of mining in the 1800’s is responsible for most of the mercury accumulation in the Bay. The miners that participated contributed on grand scale to mercury accumulation in sediment and marine life in the Bay Area. The first mine in New Almaden, CA, was discovered in the 1820’s and was known for its abundance of Cinnabar. Cinnabar is the name for the naturally occurring Earth ore containing mercury. This mine was about 10 miles south of San Jose, in the Santa Cruz Mountains. Along with this mine, and other mountainous mines, became some of the most productive mercury harvesting and gold mining sites in the world. Starting in the 1840s numerous mines extended up and down California’s mountain ranges as industries took to westward expansion for profit, essentially exploiting these natural mercury deposits.

Contrary to popular belief, the majority of gold-rush miners did not wade around in rivers and streams panning for gold, at least not corporate mining. It's important to remember that locomotion and travel was a much harder thing to achieve in the 1800’s and not everybody had the money to simply change shop and move to the west to mine for gold. Therefore, gold mining was a corporate ordeal where private organizations paid miners to operate their industrial tools of manufacture.

These companies sought gold by eroding entire hillsides with high-pressure water cannons, effectively blasting the hill’s sediment to pieces. The blasted and detached sediment from the hills was then run through what was known as “sluice boxes,” where mercury, because of its natural attraction to gold, was added to bind to gold, separating it from random sediment. The problem was that this process of hydro-blasting the hills and funneling the sediment into industrial size strainers was a messy process with little to no containment efforts in place. Large amounts of the mercury contaminated sediment made its way out of the strainers and down stream into the California Watershed. Excessive water usage in the hydro-blasting caused more and more sediment to flood into California’s Central Valley, polluting rivers and streams with mercury rich sediment. The federal government finally shut down much of the gold mining activity in 1884.

Although the excessive mining took place during the 1800s and 1900s there are still a number of oil refineries in California, and although they aren’t hydro-blasting hills with water and mercury, the coal that the refineries combust still releases evaporative mercury into the atmosphere. That evaporated mercury, because of its hot temperature then rises into the atmosphere’s clouds and once it rains, that mercury finds it’s way back down onto California coastal mountain ranges. In the mountains the acid rain is subject to movement via the watershed into California’s Central Valley and later into the Bay Area. There are a number of current coal, oil and tar sand refineries in Northern and Central California who’s locations are stationed in watershed areas that funnel into the Bay Area.

All of the refineries above either combust coal, or refine oil in the form of tar sands. Tar sands are a combination of clay, sand, water and the mineral bitumen, what the usable oil is actually extracted from. Bitumen is a heavy, viscous, oil and it takes some processing in order to separate the bitumen from the sand, water and clay. The oil extracted from the bitumen in the tar sands is similar to oil extracted from conventional oil wells to create crude oil. This whole process of mining tar sands and extracting their oils has lead to a heavy increase in Bay Area pollution as industrial and green house gasses are released into the atmosphere.

Refineries in the Central Valley contributing to the California Watershed are listed below:

These refineries as well are responsible for tar sand pollution and oil refining.

The completion of the Keystone XL pipeline would essentially increase the flow of tar sands to be refined by California coal and oil refineries, furthering our reliance on fossil fuels. Understanding that coal combustion and oil refining are some of the key contributors to atmospheric and aquatic mercury pollution allows for government interference to stop further pollution but it requires the help of the American people in passing new laws and regulations. There are ways that the government can intervene between these coal and oil companies to limit the amount of mercury evaporation. BayKeeper, a San Francisco based organization focused on reducing mercury pollution around the bay, has stated a number of ways to monitor and regulate mercury pollution. Below are their solutions.

A couple ways the government can help out:

The solutions above are virtually calling for oil refineries and coal combustion facilitators to internalize their externalities, in this case, evaporation of mercury into the Earth’s atmosphere. These solutions call for the basic ownership and responsibility for one’s pollution, a byproduct of their main production. If the government requires coal combustors and oil refineries to take control of their external pollution by setting a federal standard or law demanding awareness of and accountability for emission of green house gases then all companies have to take measures to regulate their pollution.

Pollution permits are another solution that don’t necessarily solve the problem of industrial pollution but rather present the polluter with a fiscally weighted choice. The prices of these permits to pollute would most likely be on the higher end of the spectrum of prices making internalization of external pollution and green house gas emission a cheaper method to facilitate rather than buying a permit. So, by raising the price of pollution the government can hope to move refineries and combustors in the direction of technological innovation, regulating and controlling their own pollution simply because it cheaper than paying to pollute.

The innovation method towards regulation of pollution also opens up jobs in the renewable energy sector as companies seek cleaner ways of producing energy. Companies wishing to innovate for cleaner methods of production could also potentially receive government subsidies for their research on renewable energy.

Another form of regulation that the government can use is taxation. The first carbon tax has already been designed and brought forward to Congress to consider in order to regulate and potentially curve industrial emissions. The permit system stated earlier is just another form of taxation in disguise, although it works. All these methods of regulation via taxing and permitting, forcing companies to internalize their externalities, are all effective in reducing industries carbon footprint and mercury pollution.

Of course the desirable end is to eliminate the mercury present in the Bay Area completely however, that takes time, about 70 years to be specific. The bay filters naturally as it regularly exchanges fresh water with salt water from the Pacific Ocean but the government can still step in to halt further mercury accumulation in the Bay Area.

The biggest factor in mercury contribution in the past was the Gold Rush, now most of the deposits come from coal and oil refineries. Sure innovating to regulate industrial pollution and emissions cost money, but if less people are experiencing asthma due to dirty air and nerve damage due to mercury exposure, aren’t we all a little more productive because we’re healthier? Controlling coal combustion and mercury evaporation not only benefits the American people allowing for better health but also potentially stimulates the economy as it moves the energy market towards cleaner, renewable energy.