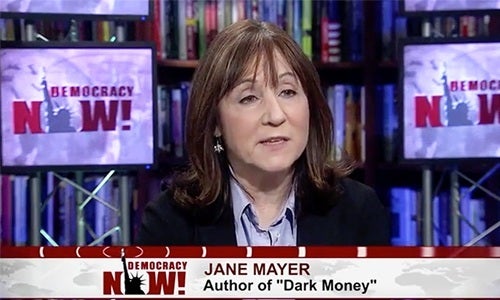 In her new book, Dark Money: The Hidden History of the Billionaires Behind the Rise of the Radical Right, New Yorker reporter Jane Mayer explores how the Koch brothers and fellow right-wing billionaires have funded a political machine aimed at shaping elections and public policy. The book contains a number of revelations and new details. Mayer begins with revealing that the Kochs’ father, industrialist Fred Koch, helped build an oil refinery in Nazi Germany—a project approved personally by Adolf Hitler. The refinery was critical to the Nazi war effort, fueling German warplanes. Mayer joins us to discuss.

Juan Gonzalez: This year’s election season is set to be the most expensive ever, with some estimates topping $10 billion. Three groups will each spend about a billion dollars on behalf of a presidential nominee. The first two are who you’d expect: Democrats and Republicans, the country’s dominant political parties. But the third group is not a political party and does not have a single candidate running for office. Instead, it’s a network of right-wing advocacy groups backed by the billionaire energy tycoons, Charles and David Koch.

According to its own estimates, the Koch network aims to spend nearly $900 million on the 2016 presidential and congressional races, more than doubling its amount in 2012. The Kochs’ political machine now eclipses the official Republican Party in key areas, with about three-and-a-half times as many employees as the Republican National Committee. Charles and David Koch’s 2016 spending comes as part of an effort to funnel hundreds of millions of dollars to conservative candidates and causes over the last four decades. Their net worth is a combined $82 billion, placing them fifth on the Forbes 400 list of wealthiest Americans.

The Kochs’ political operations have exploded in the six years since the Supreme Court’s Citizens United decision, which removed limits on campaign spending by ruling that donor money is a form of free speech. Citizens United has allowed the Kochs and others to spend millions in dark money—political donations where the source is kept secret.

Amy Goodman: The story of the Koch brothers and an allied group of billionaire donors is told in a new book by The New Yorker magazine reporter Jane Mayer. It’s called Dark Money: The Hidden History of the Billionaires Behind the Rise of the Radical Right. Jane Mayer traces how the Kochs and other billionaires, including Mellon banking and Gulf Oil heir Richard Mellon Scaife, chemical tycoon John M. Olin, electronics magnates Harry and Lynde Bradley, have leveraged their business empires to create a political machine with unprecedented influence over politics at the national, state and local level.

Beyond elections, these billionaires have also influenced the political sphere by using their money to create right-wing think tanks, endow university positions, fund research favorable to their right-wing agenda, including climate change denial, opposing healthcare reform and thwarting government regulation. The Kochs’ political empire is so vast, it’s been dubbed the “Kochtopus,” the organizations including Americans for Prosperity, Citizens for a Sound Economy.

Mayer’s book contains a number of revelations and new details. She begins with the Kochs’ father, industrialist Fred Koch. Mayer reveals that Fred Koch helped build an oil refinery in Nazi Germany—a project approved personally by Adolf Hitler. The refinery was critical to the Nazi war effort. Its oil fueled German warplanes. Before that, Fred Koch built a refinery for Joseph Stalin’s Russia. Fred Koch went on to become an original leader of the right-wing John Birch Society. Charles Koch was a member when the group campaigned against the civil rights movement in the ’60s.

Jane Mayer also uncovers evidence confirming rumors the Koch brothers tried to blackmail their own brother, Frederick, into giving up his share of the family company by threatening to out him as gay. It also emerges that the Environmental Protection Agency has named the Kochs’ company, Koch Industries, the single biggest U.S. producer of toxic waste. Mayer recounts her own potential brush with the Koch’s empire. After she profiled the brothers in a 2010 piece for The New Yorker, a private firm was hired to discredit her reporting. Although there’s no definite proof, Mayer says that clues leading back to the Kochs were everywhere. And she explores the Kochs’ multiyear effort to undermine President Obama, starting with a secretive meeting of right-wing donors the week of his inauguration.

Jane Mayer joins us now, a staff writer for The New Yorker magazine. Again, her book is called Dark Money: The Hidden History of the Billionaires Behind the Rise of the Radical Right.

Welcome to Democracy Now! It’s great to have you, Jane.

Jane Mayer: Great to be with you. Thank you.

Amy Goodman: Well, let’s start with this explosive revelation about the Koch brothers’ father, Fred Koch. Talk about his business and his involvement with Nazi Germany.

Jane Mayer: Well, he built what became the third-largest refinery in Germany during the buildup to World War II. And it was a refinery that, from the start, was meant to help the military effort of the Third Reich. It was clear that Hitler was looking for ways to refine their own oil so that they could fuel the war machine that he was building up at that point. The refinery was begun, the contract was begun in ’34—that is, 1934—and was finished in 1935. And one of the things that the father Koch was especially good at—he was apparently a brilliant engineer himself—was refining oil in a really high-octane fuel that would be good for the Luftwaffe, for the warplanes. It had to be done in a special way.

Juan Gonzalez: Jane, interestingly, the Kochs obviously are critical of your work, but they only actually responded to two of the allegations in the book. And earlier this month, they released a statement specifically on this area. They say, “Mayer falsely implies that Fred Koch was working to aid and abet Germany’s tyrannical regime during World War II and further implies that two of his sons, Charles and David Koch could somehow share these fictional sympathies … It is a sad commentary on today’s media environment that we have to respond to such irresponsible and reckless attacks.” They claim that many companies, like Ford and General Electric and others, also were involved in Germany before the war.

Jane Mayer: Well, there were other American companies that worked there, too. Ford, especially, has been singled out. It’s true, though, what they’re saying, if facts are facts. They’ve basically confirmed their father built the refinery, he designed the cracking unit, which is what refined the fuel and that became a key asset for the Nazi war machine.

Amy Goodman: And what was—

Juan Gonzalez: Also, one of the things, as you note in your book, that this is the part of the biography of the father that’s not included in official company accounts.

Jane Mayer: Well, this is the thing. I mean, it’s not to say—and what they’re kind of knocking down is a straw dog. The book does not say that Fred Koch or the sons were Nazis. And that would be a ridiculous statement. It says, specifically, Fred Koch’s views of the Nazis are unknown, but he worked with them, he made money from them and this chapter was kept hidden from the Koch Industries history that’s up online.

Amy Goodman: Why was Hitler—

Jane Mayer: It’s one of—one of many secrets about the Kochs. I mean, the truth is, this book, it grew out of a 2010 story I did for The New Yorker, which turned out to be just the tip of the iceberg. There’s so much that was not known, that took—it took five years to document all of this.

Amy Goodman: Why was Hitler personally involved with improving this refinery?

Jane Mayer: Well, his underlings were not going to approve it. And there was—the partner in this is a man named William Rhodes Davis, who was working with Fred Koch. He was a Nazi sympathizer. The U.S. considered him a Nazi agent, actually. And he was the partner in this project and he needed an okay from Hitler. And to get it, he had to go speak with Hitler himself. Hitler greenlighted the project. It was—and then gave him an autographed copy of Mein Kampf.

Amy Goodman: And then you talk about the governess that Fred Koch hired to raise the children.

Jane Mayer: Right. So, actually, Fred Koch was back and forth to Germany a lot. One of the things that—he almost went on the Hindenburg and he was, at the last minute, detained—the dirigible that blew up in New Jersey in, you know, the pre—right before the war started. He imported or somehow the family wound up with, a German nanny, who brought up the two oldest boys, Frederick and Charles—Charles who’s known today as one of the two Koch brothers. And the nanny herself was a Nazi sympathizer of such fervor that when Hitler invaded France in 1940, she had been with the Koch family for five years, but she said she needed to leave. She wanted to go back to be with the Führer to celebrate. It was strange. It was a strange—you know, it’s a fascinating family. It was a strange upbringing. I’m not saying that they were Nazis, but what I am saying is that this family was politically, from the start, filled with very strange influences.

Amy Goodman:: And Fred Koch’s involvement in the founding of the John Birch Society and what that is?

Jane Mayer: Well, so, what happens is, the father then also worked for Stalin and built the oil refineries there in Stalin’s first five-year plan. And he comes back to the U.S. and he’s horrified by what he’s seen of Stalin and he becomes just an absolutely—a sort of vitriolic anti-communist. And that leads to him being a founding member of the John Birch Society. And he passes those views on to his sons. And both David Koch and Charles Koch, the two that are known as the Koch brothers, were members of the John Birch Society, which was—kind of defined the anti-communist, right-wing fringe in America in the ’50s, ’60s. So…