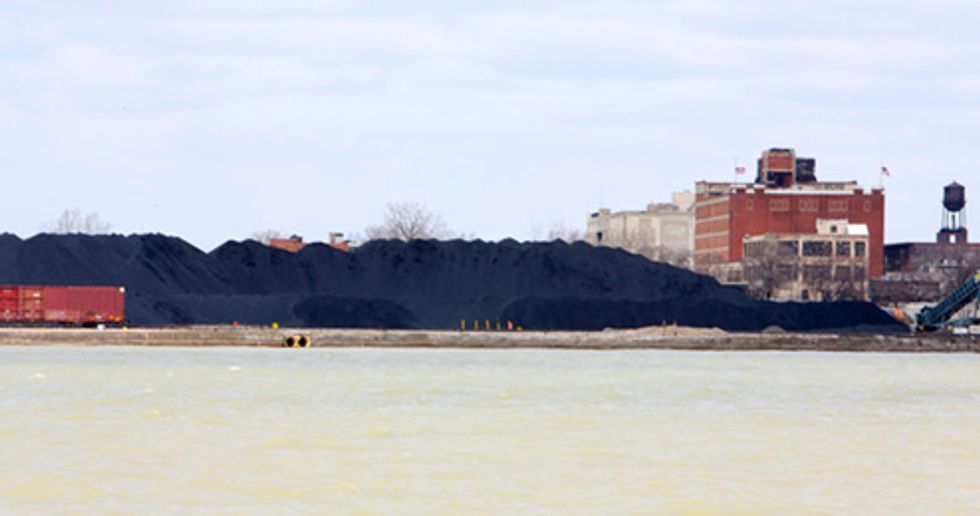 The New York Times is reporting about a growing, dirty side effect of refining tar sands bitumen from Canada. The evidence is on clear display as a black mountain piles up alongside the Detroit River, thanks in part to Charles and David Koch.

“Assumption Park gives residents of this city lovely views of the Ambassador Bridge and the Detroit skyline. Lately they’ve been treated to another sight: a three-story pile of petroleum coke covering an entire city block on the other side of the Detroit River. Detroit’s ever-growing black mountain is the unloved, unwanted and long overlooked byproduct of Canada’s oil sands boom,” says the article, “A Black Mound of Canadian Oil Waste Is Rising Over Detroit.”

The toxic mountain of petroleum coke, or petcoke, is like coal but dirtier, and is being sold by Koch Carbon to fuel the coal plants of countries like China. “The coke [in Detroit] comes from a refinery alongside the river owned by Marathon Petroleum, which has been there since 1930. But it began refining exports from the Canadian oil sands—and producing the waste that is sold to Koch—only in November.”

A study from Oil Change International earlier this year details just how dangerous petcoke is to the environment. The Keystone XL pipeline will entrench petcoke production on the Gulf Coast for the next 40 years. Without it, it is increasingly clear that Gulf Coast refiners will idle their cokers and switch to U.S. domestic light oil. Petcoke production will decrease in line with that switch.

“Detroit’s pile will not be the only one. Canada’s efforts to sell more products derived from oil sands to the United States, which include transporting it through the proposed Keystone XL pipeline, have pulled more coking south to American refineries, creating more waste product here.”