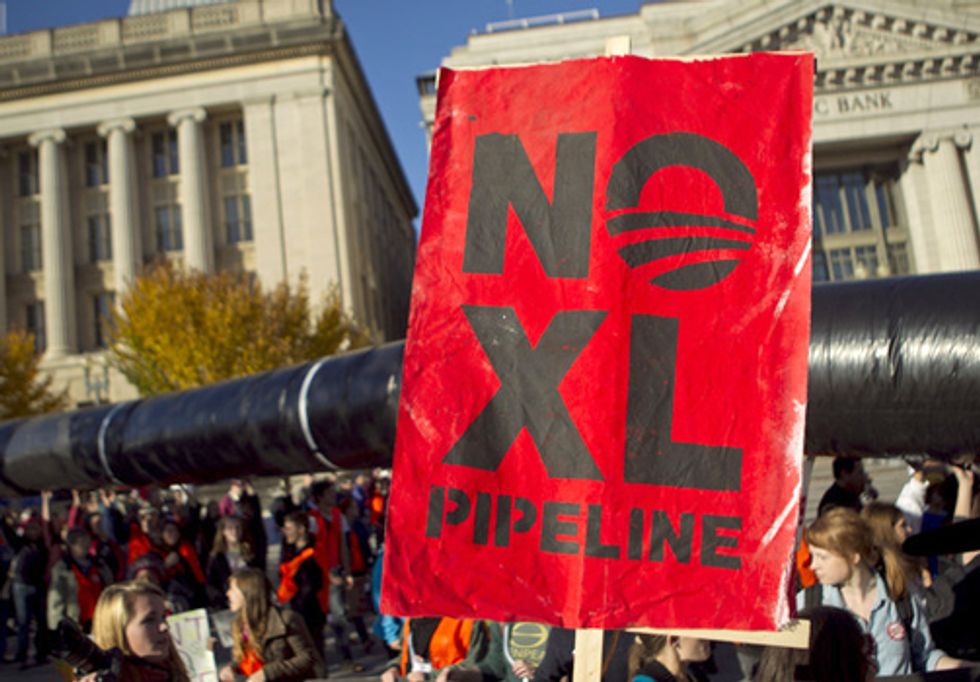 With all the political posturing in Congress over the Keystone XL tar sands oil pipeline, it’s easy to lose sight of the real issue—this pipeline is dangerous, unnecessary and would cost the American people far more than we can afford. What we're watching unfold in Washington, DC, is more than just a high-stakes political power play—it's a scam undertaken by Big Oil’s congressional puppets on the orders of oil companies that have billions of dollars at stake.

The politicians pushing the pipeline are (how can I put this politely?) lying to the American people and pandering for dirty oil money. What do we really stand to gain if this thing is rammed down our throats? Higher gas prices, more air pollution, the threat of poisoned water and enough carbon pollution to make stopping climate disruption next to impossible—but few of the jobs and none of the huge profits that Big Oil would reap.

Exaggerated job numbers play well to public concern about unemployment and the economy, but they are a hollow promise. The numbers from TransCanada—the company behind the pipeline—have already been discredited as fuzzy math for using tricks like double counting and incidental employment for dancers, choreographers and speech therapists. Here's some non-fuzzy math. The pipeline would raise gas prices across the Midwest—hurting both consumers and businesses. Ironically, the pipeline could actually destroy more jobs than it generates.

Meanwhile, our nation’s largest aquifer, which supplies one-third of U.S. irrigated farmland and the drinking water for millions, would be put at imminent risk. Although that risk most directly affects the farmers and ranchers whose livelihoods hang in the balance, every American would feel the effect of an oil-spill catastrophe in the nation’s agricultural heartland.

TransCanada has a dismal record of cutting corners, ignoring the law and spilling oil. The company's Keystone 1 pipeline spilled more than 12 times in its first year of operation, including a 21,000-gallon spill in North Dakota in May 2011 that shot a 60-foot geyser of oil into the air. Last year, the U.S. Environmental Protection Agency determined that sections of the Keystone 1 pipeline were constructed using inferior steel and defective welds.

That means we have an irresponsible company asking for permission to build a kind of pipeline that is already far riskier than normal. Unrefined tar sands crude is both thicker and more toxic than conventional crude oil. Sand in the mixture scours the inside of a pipe, and highly reactive chemicals in the crude corrode the steel. Making things even worse, the heavy, gooey tar sands has to be pumped at far higher temperatures and pressures than conventional oil.

The riskiness of piping this toxic crude all the way across America is bad enough, but on top of that, this pipeline would actually make the U.S. less secure. Retired Brigadier General Steven Anderson said it plainly:

The Keystone XL pipeline will not reduce America’s dependence on Middle East oil, or do anything to get us off oil completely, which is key to America’s national security future. Much of the oil produced by Keystone won’t go right to American gas-tanks—it is to be exported, meaning we will need to import oil the same as before.

But pipeline advocates aren't really concerned about what's best for the U.S. At least one oil company backing the pipeline, Valero, has made it clear that its main goal is to reach growing foreign diesel fuel markets. Port Arthur, TX, where the Keystone XL would end, is a Foreign Trade Zone. That means oil companies would avoid paying U.S. taxes on oil that is imported from Canada, refined in Texas, and then exported to China, Latin America or Europe. The American people get to assume all of the risk, but would see none of the benefits, not even the tax revenues.

This pipeline is a bad deal that would generate billions in profits for oil companies while leaving Americans to pay the price in higher fuel costs, energy insecurity, and polluted air and water.  At a time when we need to be doing everything we can to get off oil and reduce global-warming pollution, the Keystone XL would take us in exactly the wrong direction. Tar sands oil is a gigantic climate disaster waiting to happen.

President Obama did the right and responsible thing by deciding to reevaluate this project. The Keystone XL tar sands pipeline is dangerous, unnecessary and would cost the American people far more than we can afford. We cannot—we must not—let Big Oil and its minions in Congress force it upon us against our will.