The Inside Story of the Viral Sensation #ShellFail 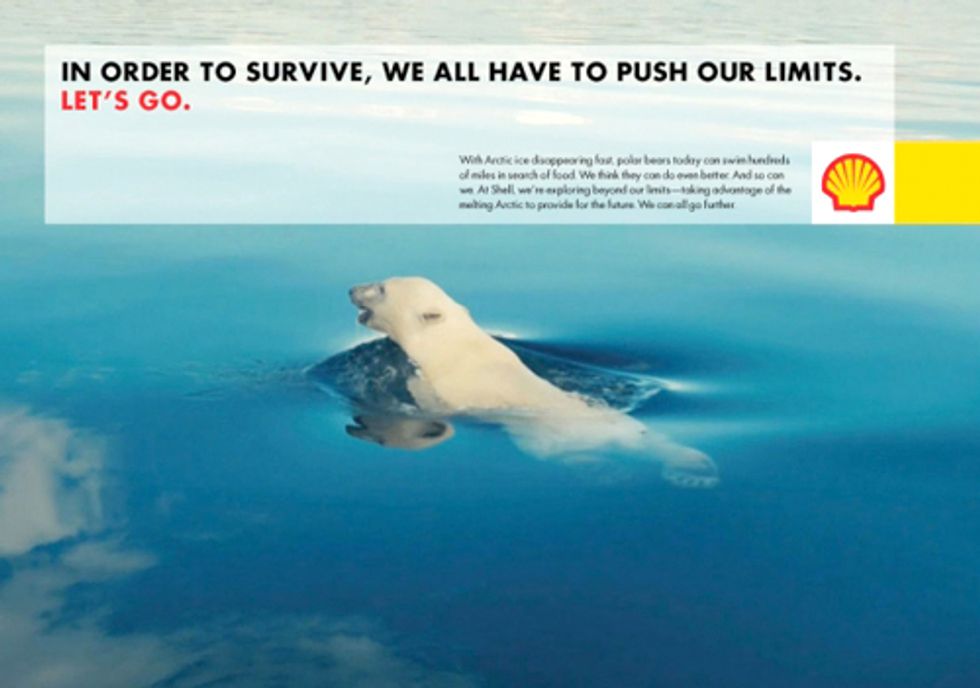 Greenpeace, the Yes Lab, and members of the Occupy movement are claiming responsibility for a set of actions that have focused intense attention on Shell's Arctic drilling program.

"This experience shows that a few energized people can compete with the billions that Shell spends on advertising and lobbying," said James Turner from Greenpeace, who posed as an advertising executive at the event. "As people find out how this oil company is exploiting global warming to cause yet more global warming, thus endangering everyone, they won't allow it, no matter how many billions Shell has in its war chest."

The centerpiece of the action was a lavish party in the Space Needle, in which a model of an Arctic-bound oil rig "accidentally" spewed liquid in the face of the rig designer's "widow"—actually 84-year-old Occupy activist Dorli Rainey, well known for having been brutally pepper-sprayed in the face by Seattle Police during Occupy protests last fall.

A one-minute video of that "malfunction," shot by Occupy "infiltrator" Logan Price, quickly reached the top spot on Reddit and the #2 spot on Youtube, with a half-million views in less than 24 hours.

"We know that climate change is putting the entire planet at risk," said Rainey. "It's our duty to stop companies like Shell from using fossil fuels as a lethal weapon—even if it means being sprayed again and again in the face."

As Shell denied, with disappointing blandness, having had anything to do with the party or the "malfunction," the Yes Lab sent out a press release on Shell's behalf, threatening anyone who reposted the video and attacking also the activists' brand-new ArcticReady.com website, which includes a social media ad generator and a dangerously addictive children's video game called Angry Bergs. The fake Shell release generated additional media coverage.

Earlier this year, Shell obtained a legal injunction stopping any Greenpeace activist from coming within 1km of any Shell vessel. To thank the company, Greenpeace teamed up with the Yes Lab to plan a promotional advertising campaign for Shell's Arctic drilling efforts, which Shell prefers to keep quiet. Besides the ill-fated ceremony and the website, the campaign includes a number of other elements that will shadow Shell's summer Arctic destruction campaign.

The device which sprayed Rainey's face was a model of Shell's drill rig, the Kulluk, which is set to soon depart Seattle for the Arctic. The Kulluk was built in 1983 by Mitsui, the same company that, two decades later, built the ill-fated Deepwater Horizon. Earlier this year, Mitsui paid out $90 million to the U.S. for its role in the Deepwater Horizon disaster.

"What Shell is preparing to do in the Arctic is the height of obscenity," said Andy Bichlbaum of the Yes Lab. "We've got to do everything we possibly can to draw attention to this unfolding disaster, and more importantly we've got to stop it."

"The melting Arctic is becoming a defining environmental issue of our era, and this campaign is just a taste of what's to come," said Turner.