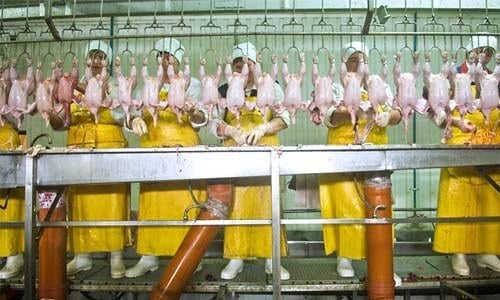 Poultry production in the U.S. employs roughly 250,000 workers, most of whom are people of color, immigrants or refugees, and many of whom are women. The value of these workers’ wages has declined 40 percent since the 1980s, while processing line speeds are twice as fast now as they were in 1979, according to new research by Oxfam America. Profiles of poultry workers in the report reveal horrifying accounts of acute injuries that were not treated correctly or ignored to keep production lines moving. Photo credit: Oxfam

The report, Lives on the Line: The Human Cost of Cheap Chicken, uncovers many hidden costs of industrial poultry production through dozens of semi-structured interviews with workers, advocates, medical experts and other community members. Oxfam also analyzed government reports, books and medical research to illustrate the full economic impacts of poultry production on workers and communities.

The report exposes the true costs of cheap chicken, revealing that industrial production practices result in high social costs, including worker safety, occupational injuries, chronic illness and lost wages from wage theft and lack of sick leave. Oxfam reports that for every dollar spent on a McDonald’s McNugget, only about two cents pays for workers in the processing plant to hang, cut, trim, bread, freeze and package those chickens. And wage distribution within companies is another issue; the president and CEO of Tyson Foods, for example, earned $12.2 million in 2014, which is 550 times what the average poultry worker makes.

Profiles of poultry workers in the report reveal horrifying accounts of acute injuries that were not treated correctly or ignored to keep production lines moving. Other basic worker rights—from bathroom breaks to protective gear—are regularly missing, according to the research.

“Oxfam should be commended for exposing the true cost of poultry processing on worker health and safety. These workers are providing food to millions of Americans, yet don’t receive a living wage, paid time off, retirement security or strong worker safety protections,” says Food Tank President Danielle Nierenberg. “By highlighting these conditions—and naming the companies responsible for them—Oxfam continues its long tradition of exposing problems in our global food system and supporting America’s food workers.”

Oxfam claims that the poultry industry inaccurately describes a trend of declining incidents that may actually be attributed to changes in injury reporting systems. Many workers reported fear of employer retaliation during interviews, and studies reviewed by the researchers indicate that immigrant populations and other vulnerable groups are less likely to report injuries.

The companies “keep a climate of fear where the employees believe that at any moment they can and will be fired,” says Mary Goff, a former staff attorney at Legal Aid of Arkansas Legal Services Partnership. “Then they are able to keep their workforce doing exactly as they please and they are able to treat people as a commodity that can be done away with when they want.”

Coinciding with the release of the new report, Oxfam will launch a Poultry Workers Campaign on Oct. 27 to target the poultry industry and highlight the importance of worker health and safety.

Emily Nink is a masters candidate of the Agriculture, Food and Environment program at the Tufts Friedman School of Nutrition Science and Policy in Boston, Massachusetts.