The Heartland of America is '100% Clean Energy Ready' 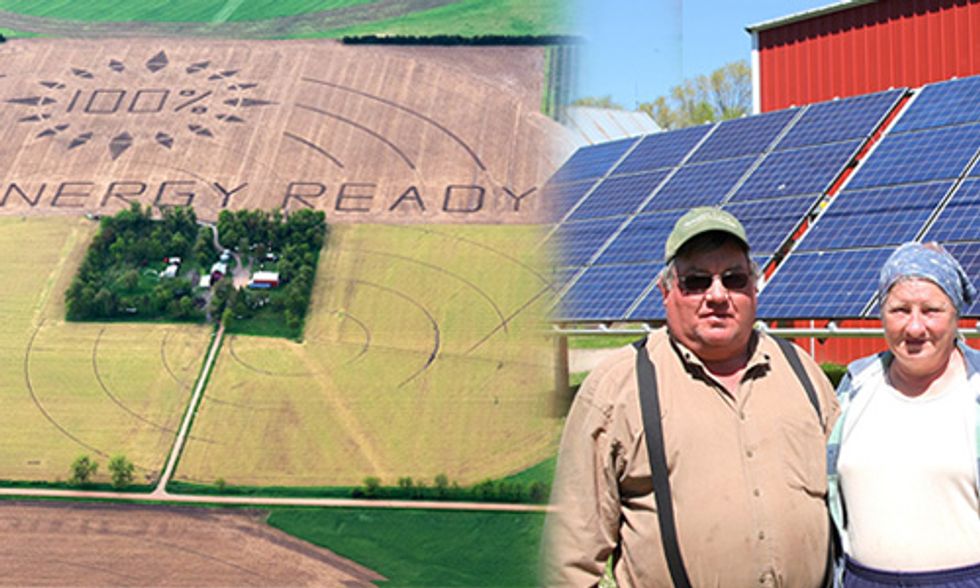 Art and Helen Tanderup are Nebraska farmers who had never intended to become environmentalists. Born and raised in America’s Heartland, the Tanderups have 160 acres in Custer Township, on which they grow corn and soybeans. Today, their farm also has a large solar array and the Tanderups drive a Chevy volt electric vehicle. But that wasn’t always the case.

A few years ago, a representative from TransCanada showed up at the Tanderup farm and asked them to sign paperwork that would allow the company to build a section of pipeline over their land. This was the beginning of a fight that made the Tanderup farm the spiritual home for the movement to reject the Keystone XL pipeline.

The land had been in Helen’s family for over a century and the couple hoped to pass the farm on to their children and grandchildren. But when the TansCanada representative showed up, they feared that the pipeline would obliterate their family legacy.

The Tanderup land is also located directly on the Ponca Trail of Tears and the proposed route cut across this sacred site. Bold Nebraska, the Brave Heart Society, the Ponca and Sioux tribes and families from along the proposed route gathered together on the land to pray for their common purpose—to protect the land and water. The Tanderup farm became the rallying point for families, neighbors and fellow opponents of the pipeline.

Art and Helen realized that in order to stop pipelines like Keystone XL from being built, they would need to have solutions—and that meant encouraging the use of renewable energy like solar and wind, which don’t take resources from the Earth. They made a commitment to do everything possible to bring these solutions about.

In 2014, the Tanderups used their land to send the world's largest crop art message, spelling out “Heartland #NoKXL,” created in collaboration with artist John Quigley. The crop art generated widespread media attention and led to the “Harvest of Hope” concert to fund the ongoing fight against the Keystone XL pipeline and benefit organizations involved, as well as to support a number of small, community-based clean energy projects on farms and tribal land. Nearly 10,000 people came to see Willie Nelson and Neil Young perform.

The long and ultimately victorious fight to stop the Keystone XL pipeline inspired the Tanderups to install their own large solar array on the farm and to get an electric vehicle that could be charged entirely by the sun.

“The Keystone XL fight will not be over until we have transitioned to 100 percent clean energy,” said Art Tanderup. “Dirty fuels are bad for our farms and our communities—and the farmers, cowboys, Indians, and others who stood up to TransCanada are now standing up for what’s right for the Midwest. We need to create clean, healthy, American-produced energy right here in the Heartland. Clean energy is no longer a thing of the future—it’s powering Heartland farms and families today.”

The crops that the Tanderups plant have their cycles, and so does the Tanderups’ story of resistance. In the very same 80 acre corn field where the couple shared with the world their message of resistance to Keystone XL, Art and Helen have partnered again with Quigley to create a new piece of crop art with a new and hopeful message: The Heartland of America is “100% Clean Energy Ready.”