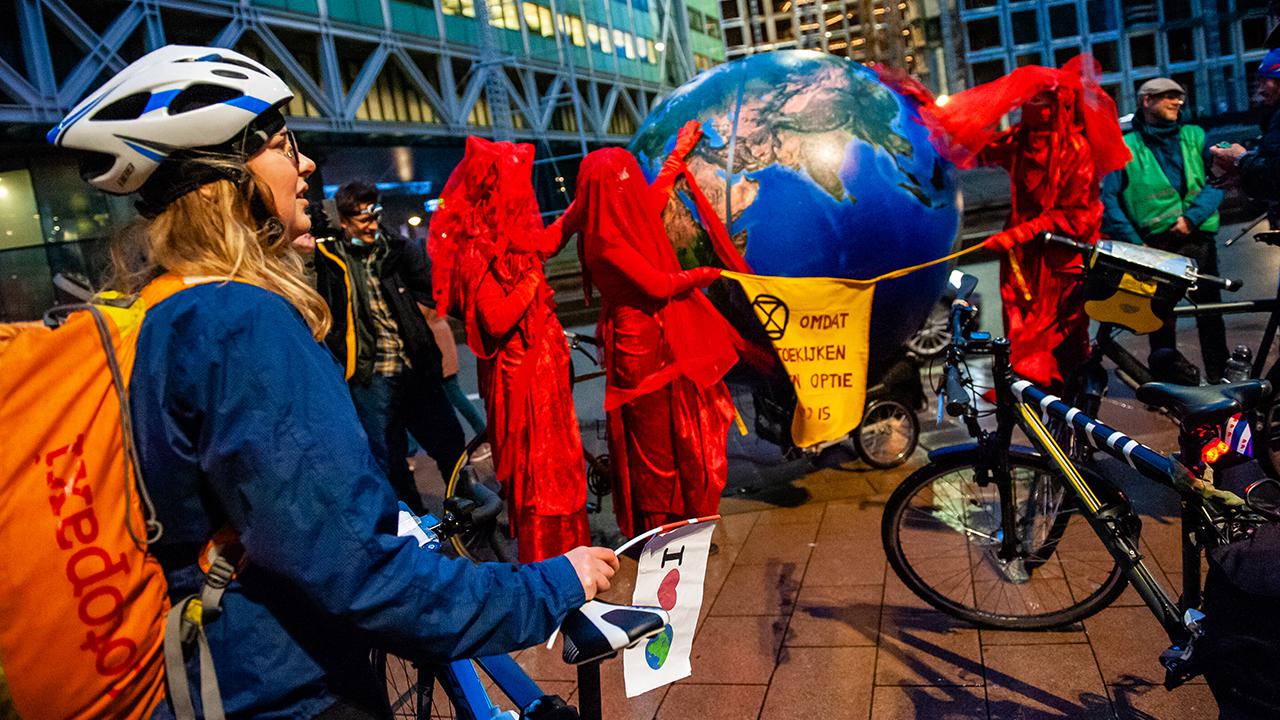 A group of climate activists that have been cycling from the North of the country in stages to draw attention to the climate case are arriving to the Court of Justice on the day that the climate lawsuit against Shell starts in The Hague, on December 1st, 2020. Romy Arroyo Fernandez / NurPhoto / Getty Images

Milieudefensie, the Dutch arm of Friends of the Earth, says Shell has broken the law in The Netherlands by knowingly standing in the way of the country’s phase-out of fossil fuels. Shell says it has set a goal of cutting its emissions to net zero by 2050, but the group is demanding a more rapid reduction.

“We are relying on the Dutch courts to protect communities around the globe,” tweeted Nils Mollema, a policy advisor at ActionAid, which is supporting Milieudefensie in the case.

Today in The Hague: Shell on trial for its role in climate catastrophe. @Shell must take responsibility and correct their course and align with a 1.5 degree target. We are relying on the Dutch courts to protect communities around the globe. #StopShell https://t.co/qk0WZbxX5z

“The claimants therefore conclude that Royal Dutch Shell’s corporate policy is on collision course with global climate targets,” Roger Cox, a lawyer representing Milieudefensie in the civil case, told a panel of three judges at The Hague District Court on Tuesday.

The organization has vehemently rejected Shell’s defense in the case, in which the multinational corporation is suggesting that it is no more responsible for solving the climate emergency than other businesses or individuals.

“What will accelerate the energy transition is effective policy, investment in technology, and changing customer behavior,” Shell said Tuesday as the first of four days of hearings began. “None of which will be achieved with this court action.”

Cox noted in his opening remarks that Shell is responsible for about 1.2% of the planet’s industrial fossil fuel emissions.

The case opened a month after Shell drew outrage from climate action campaigners by posting a poll on its official Twitter account, asking ordinary citizens what they plan to do to help mitigate the climate crisis.

“I’m willing to hold you accountable for lying about climate change for 30 years when you secretly knew the entire time that fossil fuels emissions would destroy our planet,” U.S. Rep. Alexandria Ocasio-Cortez (D-N.Y.) replied at the time, denouncing the company’s “audacity.”

On Monday, Pols called the opening of the case at The Hague “a historic moment.”

“This is actually ‘the People versus Shell,’ a company that has got away with greenwashing for too long,” he said in statement. “This case will make it clear to everyone that more than 95% of what Shell does is causing dangerous climate change. This has to change as soon as possible.”