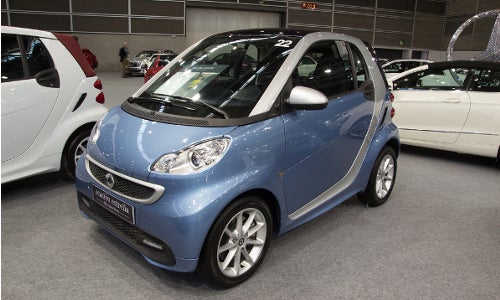 The mission of GreenCars.org, a website sponsored by the American Council for an Energy-Efficient Economy (ACEEE), is to help consumers learn whether the car they’re thinking of buying is environmentally friendly. One way they do that is through their annual “greenest” and “meanest” ratings, which was released today for the model year 2015. 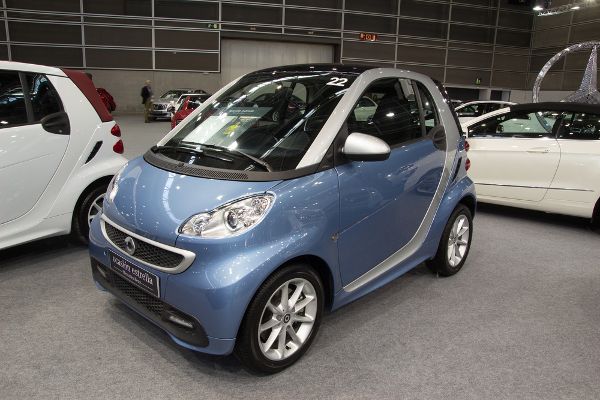 The Smart Fortwo, made by Mercedes-Benz, may look like a toy, but it’s both environmentally and wallet-friendly.

“We analyze automakers’ test results for fuel economy and emissions as reported to the U.S. Environmental Protection Agency (EPA) and the California Air Resources Board, along with other specifications reported by automakers,” they explain. “We estimate pollution from vehicle manufacturing, from the production and distribution of fuel and from vehicle tailpipes. We count air pollution, such as fine particles, nitrogen oxides, hydrocarbons and other pollutants according to the health problems caused by each pollutant. We then factor in greenhouse gases (such as carbon dioxide) and combine the emissions estimates into a Green Score that runs on a scale from 0 to 100.”

That vehicles are still a major source of damage to the environment is shown by the fact that the top vehicle scored 61, with an average score of 37, and the worst vehicle scoring a dismal 17.

The winners’ list is no surprise. It’s dominated by electric plug-in vehicles, which claimed six of the top 12 including slots 1, 2 and 3, 5 and 6. The little sub-subcompact, the Mercedes-Benz Smart Fortwo electric drive convertible/coupe, snagged the top spot, followed Chevy Spark EV and the Fiat 500E. The Nissan Leaf (5), the Toyota Prius Plug-In Hybrid (6) and the Ford Focus Electric (11) also finished in the top 12. That list also included four hybrids, one conventional car (the Mitsubishi Mirage) and the Honda Civic Natural Gas, the only consumer car available powered by natural gas. 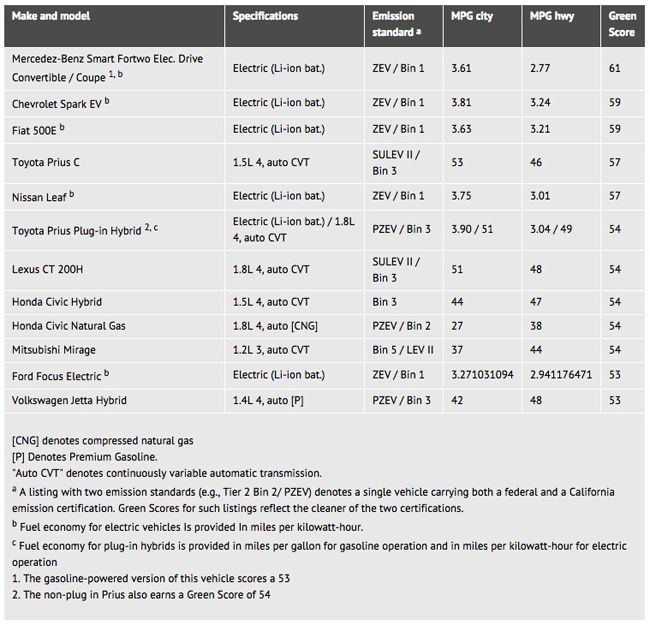 “As the electric vehicle market continues to develop, we’re seeing a number of different options from a variety of automakers, including several from American manufacturers,” said ACEEE lead vehicle analyst Shruti Vaidyanathan.