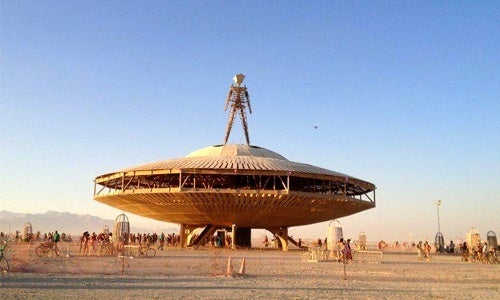 ’’‘It’s being called the “great Burning Man plague of 2015.” And no it’s not all the wealthy tech elite who have been accused of ruining the ethos of the festival. It’s a bug infestation. The Twitterverse has been abuzz (pun fully intended) leading up to the annual “burn,” and earlier this week one of the organizers, John Curley, confirmed the bug rumors on the Burning Man blog.

A plague of insects is really harshing the vibe at Burning Man. http://t.co/9eoYOfo1hH pic.twitter.com/71H1GopQUL

First, for those who aren’t familiar, Burning Man is a week-long annual event that began in San Francisco in 1986 and migrated to the Black Rock Desert in northern Nevada. At its most basic, the event is described as an experiment in community, art, radical self-expression and radical self-reliance. But if you listen to a festivalgoer, that is just the beginning of what the annual event really is. Burners—as they call themselves—wax poetic about “the mind-altering experience of Burning Man.”

The festival has become massive, turning out some 60,000 people (making the Black Rock’s population swell to more than Nevada’s state capital for a week). Whether you think the festival is just “all dusty hippies and Silicon Valley tech bros at a giant desert rave” or a radical experiment in anti-capitalist ecotopia living, one thing is for sure. This year, the festival has a serious bug problem.

“You may have seen the bug rumors on the internet,” wrote Curley. “We are here to tell you that they are all true. Well maybe not all of the rumors, but the bugs are real. They’re everywhere. They bite. They crawl all over you. They get up and in you.”