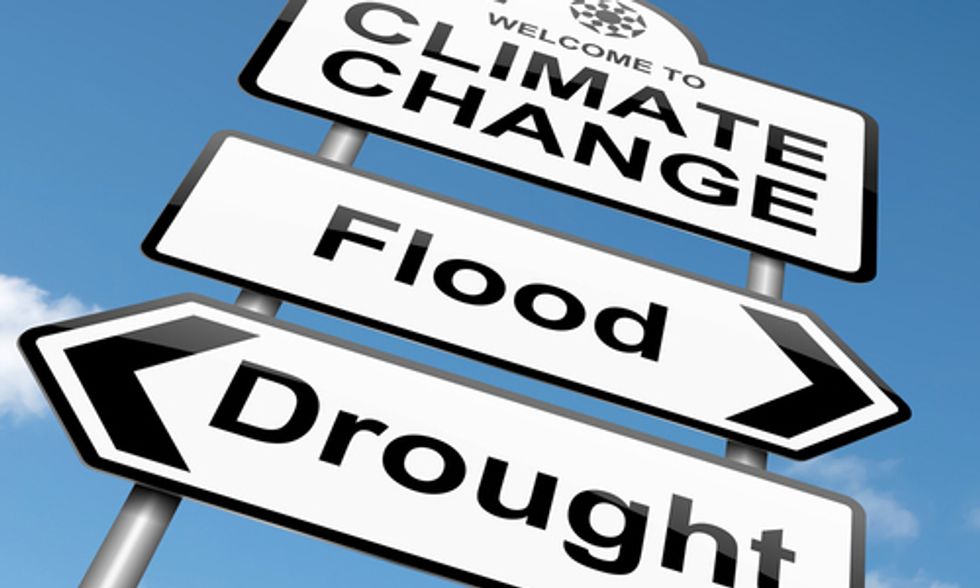 Winston Churchill saw the gathering storm long before the rest of the world. Europe sacrificed millions of people before it openly acknowledged and then directly confronted the crisis. Yet, even after the Allies responded, the outcome was uncertain. Only when the U.S. entered the fray could the Allies see a clear path to end the threat.

The scientific debate about whether human-caused global warming exists is long over. The remaining window of time for the needed transformation is short, and the only real issue is how we respond. This is where U. S. leadership is most critical.
Photo credit: Shutterstock

While meeting that threat, the war mobilization also provided employment for millions and pulled the U.S. economy out of the Great Depression, leading to a half-century of prosperity. Americans mostly look back fondly on that period, as the world became a better place in many ways for the changes that were made.

Today, we face another threat, this time from climate disruption. Again, the U.S. must lead—this time to a clean energy future and a healthier world. As we experience more intense and longer heat waves, prolonged drought, crop failures, rising seas, increasing wildfires and floods, and as natural systems begin to crash, we will see profoundly destabilizing effects.

The scientific debate about whether human-caused global warming exists is long over. The remaining window of time for the needed transformation is short, and the only real issue is how we respond. This is where U. S. leadership is most critical.

Global warming already directly impacts public health, our economy, food and water supplies, and national security. What’s more, a recently leaked UN report details how global warming now most assuredly will lead to “severe, pervasive and irreversible impacts.” In an attempt to alert the public to the danger, it was released by scientists prior to its being substantively amended by government representatives who might feel tempted to censor critical information.

In response to the scale and urgency of the threat, and in solidarity with our colleagues, we call on our fellow scientists to speak clearly to the nation and the world, and if so moved, to sign on to our Scientific Statement on Climate Stabilization. To successfully combat global warming and stay below the 2-degree C heat ceiling, the statement calls for these actions:

First, carbon emissions should peak now. Reducing our greenhouse gas emissions must begin at once in industrialized nations, and within a few years in developing nations. Second, we must reduce emissions by several percent per year and quickly transition away from fossil fuels. Third, the U.S. must lead. The U.S. must embrace the Copenhagen Accord, shape the upcoming 2015 Paris accords, and lead this next great industrial transformation. Our capacity to innovate is unmatched, which means that U. S. industry will benefit from political clarity around climate stabilization.

The statement’s purpose is bring disparate efforts together to work cooperatively on actions that meet the scope, scale, and urgency of the climate crisis. The longer we remain mired in the status quo, the harder and more expensive it will be, and the closer we will come to runaway warming. A recently released Council of Economic Advisors report underscores the importance of action now.

It is not a question of whether we can make the necessary changes. Much of the technology already exists, and we have significant practical experience to draw upon. For example, California uses nearly 50 percent less electricity per capita as the U.S. average, has one of the most aggressive renewable energy standards in the country, and has set an economy-wide limit on its global warming pollution.

California has developed a visionary economy-wide climate plan, the Global Warming Solutions Act (AB32)that helps promotes job growth in fast-growing industries. Much of this innovation is centered in Silicon Valley, with its strong university-industry partnerships. The Silicon Valley Leadership Group, an influential business organization with nearly 400-member companies, has long supported action to address climate change. Operating out of the Leadership Group Foundation, the California Climate Breakthrough Initiative (CCBI) believes we must hold a national conversation about the future we want.

We agree. Americans have many questions about the climate crisis and what we can do to tackle it. Face-to-face education and dialogue are necessary to come to grips with what we face. Thus, in addition to joining in a call for a climate breakthrough, we ask scientific, community and business leaders to call for and lead public teach-ins at their universities and organizations to discuss the need for immediate and dramatic change in the way we run our world.

Individuals play a key role too. Ask your local universities and libraries to hold teach-ins about the climate crisis. If more Americans understand what we face, they can motivate political leaders to take meaningful, immediate, action.

This Sept. 23, in New York City, we will join world leaders who will come together at the UN for Climate Summit 2014, to “champion an ambitious vision, anchored in action that will enable a meaningful global agreement in 2015.” 2015 is important because of the November 2015 UN Climate Change Conference in Paris, whose objective is to achieve a legally binding and universal climate agreement.

As a lead-up to the 2014 Climate Summit, the UN’s Sustainable Development Solutions Network has produced Pathways to Deep Decarbonization, which shows how countries can transition to a low-carbon economy and meet the 2-degree C (3.6 F) heat limit. During World War II, this country transformed its entire economy, even stopping automobile production for three years to manufacture goods for the war effort. We can do it. We know we can. It is just a matter of public will and effort.

Michael Mann is Distinguished Professor of Meteorology at Pennsylvania State University, Director of the Penn State Earth System Science Center and author of The Hockey Stick and the Climate Wars: Dispatches from the Front Lines (now available in paperback with a new guest foreword by Bill Nye "The Science Guy")

Daniel M. Kammen is the Class of 1935 Distinguished Professor of Energy at the University of California, Berkeley.  He has served as the World Bank lead on Clean Energy and Energy Efficiency, serves the State Department as an Energy and Climate Fellow to the Americas, and has served as a contributing or coordinating lead author for the Intergovernmental Panel on Climate Change which shared the 2007 Nobel Peace Prize.