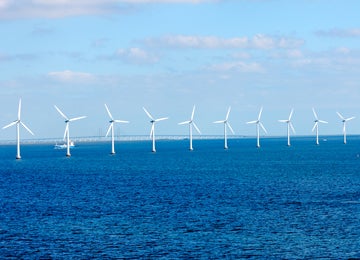 In June, after years of offshore wind power projects being thwarted in the U.S., the first offshore wind turbine began spinning off the U.S. coast. The turbine was not a multi-megawatt, 400-foot behemoth off of Massachusetts, Rhode Island, New Jersey, or Texas—all places where projects had long been proposed. Rather, the turbine was installed in Castine Harbor, ME, rising only 60 feet in the air and featuring a 20-kilowatt capacity—enough to power only a few homes.

Offshore wind farm in the Baltic Sea off Copenhagen, Denmark.

But it was a turbine—finally. Offshore wind power in the U.S. has struggled mightily to rise from the waves, even as other renewable energy industries have steadily grown. The country now has more than 60,000 megawatts of onshore wind, but still just the lone offshore turbine, a pilot project run in part by researchers at the University of Maine. Meanwhile, Europe has left the U.S. far behind, installing its first offshore turbine in 1991 and growing rapidly in the past decade. To date, the countries of the European Union have built 1,939 offshore turbines with 6,040 megawatts of capacity.

Is the U.S. offshore wind industry finally about to get off the ground? Offshore wind carries impressive electricity-generating potential, and several projects seem poised to get underway. But energy analysts say the industry still faces daunting hurdles, most notably the higher cost of building offshore wind farms, the expense of connecting them to the onshore grid and the lack of the comprehensive government incentives and renewable energy targets that have been crucial in fostering the growth of Europe’s offshore wind energy sector.

On the positive side, the infamous Cape Wind project, mired in legal battles for more than a decade, hopes to start construction next year. With plans to construct 130 turbines in the shoals between Nantucket and Cape Cod, Cape Wind has faced enormous legal struggles because of opposition from local residents concerned that the turbines would mar the region’s beauty and harm seabird populations. But its legal battles are now largely behind it, and Cape Wind has power-purchase agreements in place. The wind farm’s developer, Jim Gordon, says the project will eventually be capable of supplying about 75 percent of the electricity needs of Cape Cod, which has a year-round population of 215,000.

Meanwhile, the Obama administration and the U.S. Department of the Interior have been aggressively moving to streamline permitting processes for offshore wind farms, and this summer completed the first two auctions for large offshore parcels for wind development off the East Coast. Rhode Island-based Deepwater Wind—owned in part by investment firm D.E. Shaw and by First Wind, a Boston-based developer—won the first-ever offshore wind auction held by a division of the Interior Department known as the Bureau of Ocean Energy Management (BOEM). With its winning $3.8 million bid, Deepwater Wind now holds the wind power rights to 165,000 acres off the coasts of Rhode Island and Massachusetts.

“We believe that site is the single best site for offshore wind in the U.S.,” says Deepwater CEO Jeffrey Grybowski, citing the powerful and consistent winds and access to markets in four states—Massachusetts, Rhode Island, Connecticut and New York. Though the exact number will depend on how much power it can sell to utilities, Deepwater Wind hopes to install roughly 200 turbines that could generate more than 1,000 megawatts, enough to power about 400,000 homes.

A second BOEM auction took place in early September for a 112,799-acre parcel off the coast of Virginia, this time won by Virginia Electric and Power Company. The planned wind farm could grow as big as 2,000 megawatts. Auctions for sites off of Maryland, New Jersey and Massachusetts are expected to be held in the next year.

“The more projects we get in the water, the more that will accelerate the development of the industry,” says Chris Long, the manager of offshore wind and siting policy at the American Wind Energy Association. “You need to build projects in order to continue innovations, to drive down costs, to achieve scale and achieve experience. Getting this first round of projects in the water will certainly help to accelerate the development of the industry.”

At this point, it appears that the first commercial offshore wind installation to begin operating in the U.S. will be Block Island Wind Farm, being developed by Deepwater Wind. Sited about three miles from Block Island—itself about 15 miles off the coast of Rhode Island—the wind farm will feature five mammoth turbines, each capable of generating six megawatts. The proposed Block Island installation has the advantage of sitting in state rather than federal waters, easing permitting issues. Grybowski, says permitting is all but finished for that project and construction should start next year.

Despite these developments, many analysts are skeptical about the near-term future of offshore wind, especially considering the uncertainty surrounding federal financial support. 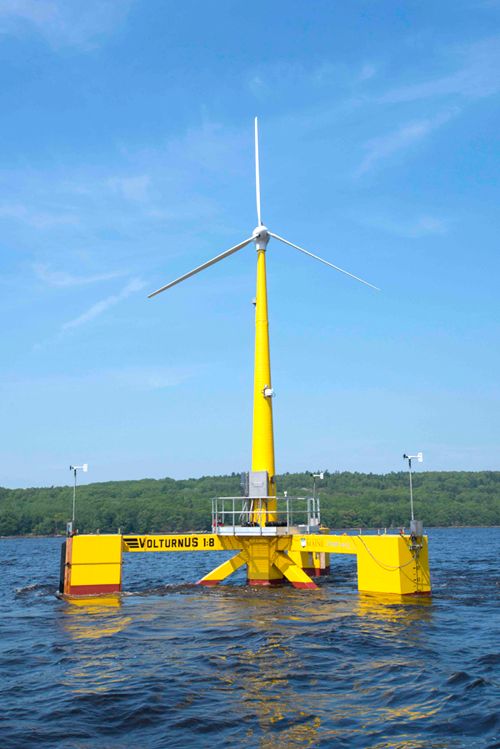 A single wind turbine in Castine Harbor, off the coast of Maine, is the only offshore wind turbine installed in U.S. Photo credit: University of Maine/ DeepCWind Consortium

“Some kind of policy incentive is needed in order to promote offshore wind, since its cost is still far above the market price of electricity,” says Bruce Hamilton, director of energy practice at the consulting firm Navigant.

Right now, the offshore wind investment tax credit is the only federal incentive, and it is set to expire at the end of 2013 after a one-year extension. It allows developers to take a tax credit on 30 percent of capital expenditures related to a wind project, but construction would have to start this year. Several U.S. senators earlier this year introduced the Incentivizing Offshore Wind Power Act, which would attempt to stabilize the year-to-year policy, but that legislation is likely to die in committee.

“We will [likely] continue to have a stop-start policy at the federal level, since that is what we have experienced for the last couple of decades,” Hamilton says.

The uncertainty of federal funding has taken a toll on the proposed Atlantic City Wind Farm off the coast of New Jersey, which would feature five turbines totaling 25 megawatts of capacity. The company behind the project, Fisherman’s Energy, was founded by commercial fishermen intent on both developing wind energy and maintaining a strong fishing industry in the region. But the New Jersey Public Utilities Commission is balking at a potential multi-million dollar taxpayer hit if federal funding for the project disappears.

A major project, backed by Google, is planned to link offshore wind farms along the U.S. East Coast to power consumers onshore. The Atlantic Wind Connection is a transmission “backbone” designed to let multiple offshore wind projects essentially plug in to undersea cables as they come online. The first phase, a cable that will stretch the length of the New Jersey coast and be capable of carrying 3,000 megawatts of electricity, is scheduled to begin construction in 2016. The rest of the “backbone” would extend down the coast past Delaware and Maryland, stretching to the coast of Virginia. Along with Google, the project is funded by such companies as Bregal Energy, Marubeni Corporation, and a Belgian transmission company, Elia.

Long, of the American Wind Energy Association, and others are confident that the initial phase of offshore projects will illustrate to policy makers the attraction of offshore wind power. Onshore wind, after all, is often plagued by siting issues, with nearby residents complaining about the sight and sound of large turbines. Most U.S. offshore projects are now proposed far enough off the coast that they will be essentially invisible—a lesson learned from the “viewshed” controversy surrounding Cape Wind.

Proponents hope that the start of several offshore projects will encourage more federal and state support and will serve as a reminder that there is a lot of energy just a few miles off the beach.

“The East Coast is the Saudi Arabia of offshore wind, because there is enough energy there to provide the entire U.S. with electricity if it was fully developed,” says Matt Huelsenbeck, a marine scientist and offshore wind expert with the non-profit group Oceana. The National Renewable Energy Laboratory, part of the Department of Energy, puts the onshore and offshore U.S. wind energy potential at 4,150 gigawatts, around four times the entire electricity requirements of the U.S. The Northeast and mid-Atlantic coasts in particular are windy spots with water depths that make development feasible.

The U.S. has no national renewable energy target, but 29 states and Washington, DC, have adopted their own. Northeastern states like Massachusetts and Rhode Island have been aggressively pursuing renewables, and there is now legislation in New Jersey and Maryland specifically targeting offshore wind development.

Kevin Jones, deputy director of the Institute for Energy and the Environment at the University of Vermont Law School, says he is optimistic about the development of offshore wind, especially in the Northeast, in part because there are so few other options for renewables in the region and the opposition to onshore wind continues to grow.

“If natural gas prices remain low I think the offshore industry is going to need public policy support rather than federal subsidy, but it can happen if the Northeastern states work together to achieve economies of scale,” says Jones. That collaboration could include states collectively mandating that utility companies purchase a set amount of electricity from offshore wind farms.

Still, the progress in Europe is a clear reminder of how far the U.S. has to go, a gap that Huelsenbeck attributes to “a failure of our federal government to really back clean energy over the last few decades in a very powerful and consistent way.”

The European Union is on target to generate 20 percent of its electricity from renewable sources by 2020, and targets as high as 40 percent are being considered for 2030. In 2014 alone, close to two gigawatts of offshore wind—enough to power more than a million households—are likely to be installed in the EU, with the United Kingdom and Denmark leading the way.