The Fukushima Story You Didn't Hear on CNN 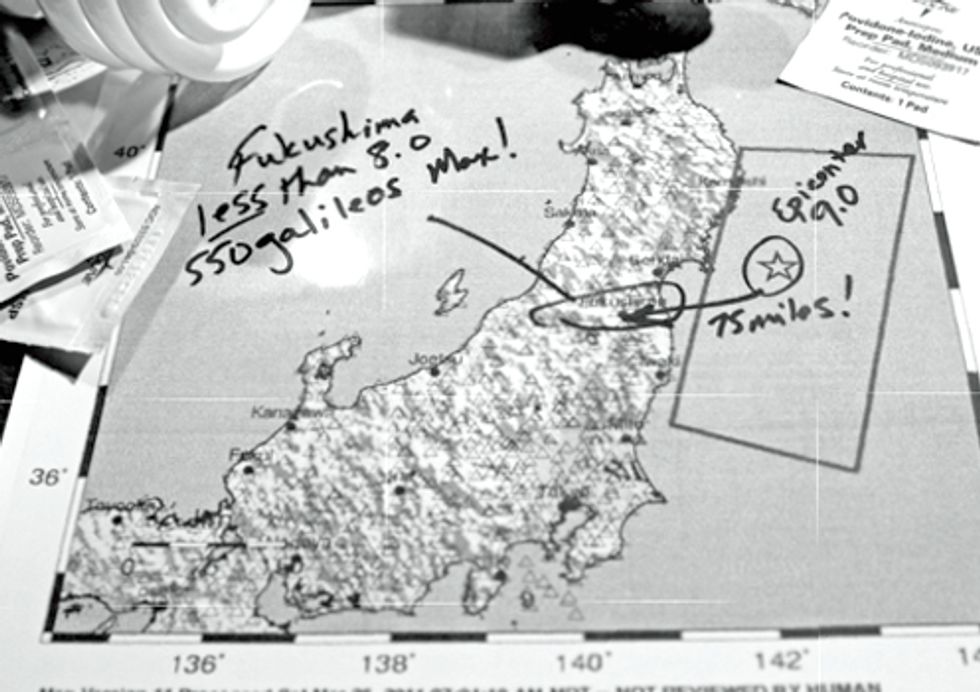 I've seen a lot of sick stuff in my career, but this was sick on a new level.

Here was the handwritten log kept by a senior engineer at the nuclear power plant:

Wiesel was very upset. He seemed very nervous. Very agitated. . . . In fact, the plant was riddled with problems that, no way on earth, could stand an earthquake. The team of engineers sent in to inspect found that most of these components could "completely and utterly fail" during an earthquake.

"Utterly fail during an earthquake." And here in Japan was the quake and here is the utter failure.

The warning was in what the investigations team called The Notebook, which I'm not supposed to have. Good thing I've kept a copy anyway, because the file cabinets went down with my office building ....

[This is an excerpt in FreePress.org from Vultures' Picnic: In Pursuit of Petroleum Pigs, Power Pirates and High-Finance Fraudsters, to be released this Monday. Click here to get the videos and the book.]

Two senior nuclear plant engineers were spilling out their souls and files on our huge conference table, blowing away my government investigations team with the inside stuff about the construction of the Shoreham, New York, power station.

The meeting was secret. Very secret. Their courage could destroy their careers—No engineering firm wants to hire a snitch, even one who has saved thousands of lives. They could lose their jobs; they could lose everything. They did. That’s what happens. Have a nice day.

On March 12 this year, as I watched Fukushima melt, I knew—the "SQ" had been faked. Anderson Cooper said it would all be OK. He'd flown to Japan, to suck up the radiation and official company bullshit. The horror show was not the fault of Tokyo Electric, he said, because the plant was built to withstand only an 8.0 earthquake on the Richter scale, and this was 9.0. Anderson must have been in the gym when they handed out the facts. The 9.0 shake was in the middle of the Pacific Ocean, 90 miles away. It was barely a tenth of that power at Fukushima.

I was ready to vomit. Because I knew who had designed the plant, who had built it and whom Tokyo Electric Power was having rebuild it—Shaw Construction. The latest alias of Stone & Webster, the designated builder for every one of the four new nuclear plants that the Obama administration has approved for billions in federal studies.

But I had The Notebook, the diaries of the earthquake inspector for the company. I'd squirreled it out sometime before the Trade Center went down. I shouldn't have done that. Too bad.

All field engineers keep a diary. Gordon Dick, a supervisor, wasn’t supposed to show his to us. I asked him to show it to us and, reluctantly, he directed me to these notes about the “SQ” tests.

SQ is nuclear-speak for “Seismic Qualification.” A seismically qualified nuclear plant won’t melt down if you shake it. A “seismic event” can be an earthquake or a Christmas present from Al Qaeda. You can’t run a nuclear reactor in the U.S. or Europe or Japan without certified SQ.

This much is clear from his notebook: This nuclear plant will melt down in an earthquake. The plant dismally failed to meet the Seismic I (shaking) standards required by U.S. and international rules.

Here’s what we learned—Dick’s subordinate at the nuclear plant, Robert Wiesel, conducted the standard seismic review. Wiesel flunked his company. No good. Dick then ordered Wiesel to change his report to the Nuclear Regulatory Commission, change it from failed to passed. Dick didn’t want to make Wiesel do it, but Dick was under the gun himself, acting on direct command from corporate chiefs. From The Notebook:

Wiesel was very upset. He seemed very nervous. Very agitated. [He said,] “I believe these are bad results and I believe it’s reportable,” and then he took the volume of federal regulations from the shelf and went to section 50.55(e), which describes reportable deficiencies at a nuclear plant and [they] read the section together, with Wiesel pointing to the appropriate paragraphs that federal law clearly required [them and the company] to report the Category II, Seismic I deficiencies.

The law is clear. It is a crime not to report a safety failure. I could imagine Wiesel standing there with that big, thick rule book in his hands, The Law. It must have been heavy. So was his paycheck. He weighed the choices: Break the law, possibly a jail-time crime, or keep his job.

What did Wiesel do? What would you do?

Why the hell would his company make this man walk the line? Why did they put the gun to his head, to make him conceal mortal danger? It was the money. It’s always the money. Fixing the seismic problem would have cost the plant’s owner half a billion dollars easy. A guy from corporate told Dick, “Bob is a good man. He’ll do what’s right. Don’t worry about Bob.”

That is, they thought Bob would save his job and career rather than rat out the company to the feds.

But I think we should all worry about Bob. The company he worked for, Stone & Webster Engineering, built or designed about a third of the nuclear plants in the U.S.

From the fifty-second floor we could look at the Statue of Liberty. She didn’t look back.

Greg Palast is the author of  Vultures' Picnic: In Pursuit of Petroleum Pigs, Power Pirates and High-Finance Carnivores.