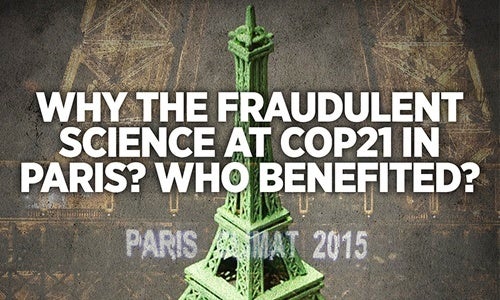 Before the ink had dried on the COP21 climate agreement, many from the food movement were reflecting on the process and plans worked on in Paris.

In their co-authored Washington Post op-ed piece, A Secret Weapon to Fight Climate Change: Dirt, Michael Pollan and Debbie Barker wrote, “Unfortunately, the world leaders who gathered in Paris this past week have paid little attention to the critical links between climate change and agriculture. That’s a huge mistake and a missed opportunity.” 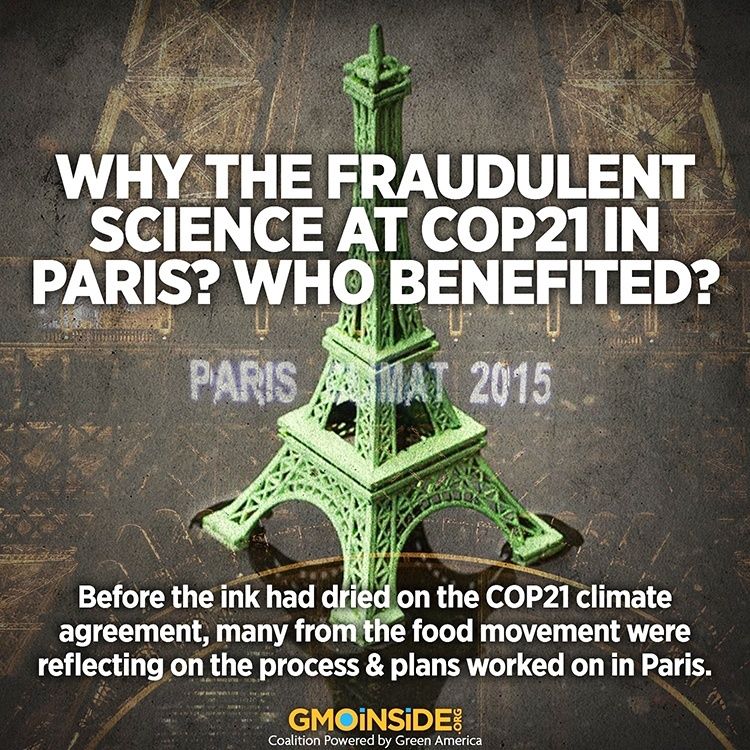 Before we explore the case of fraud in Paris, let’s first review the definitions of fraud:

1. Wrongful or criminal deception intended to result in financial or personal gain.

2. A person or thing intended to deceive others, typically by unjustifiably claiming or being credited with accomplishments or qualities.

Following decades of public misinformation, today we know that the tobacco industry committed fraud by attempting to disconnect lung cancer from the smoking of cigarettes. And the state of New York is now investigating ExxonMobil for allegedly misleading the public about climate change.

So, following along on this idea of fraudulence, why has virtually every COP21 media article repeated the mistaken idea that the only strategy to fight climate change is the failed one to stop burning fossil fuels?

Why Would Industrial Ag Cover Up This Inconvenient Truth?

Yes, tobacco and Big Oil have been well compensated for committing “deception intended to result in financial or personal gain.” So it’s vital for the public to identify the latest corporate shenanigans using deception and black hat PR to deceive public officials for financial gain.

These would be the giants of the industrial agriculture industry, including Monsanto, Dow, DuPont, Syngenta, Bayer, McDonald’s and the entire synthetic fertilizer industry—the corporations that have undercounted and misrepresented America’s agricultural greenhouse gas (GHG) emissions.

Is the U.S. Department of Agriculture (USDA) Committing Accounting Fraud by Stating 10 Percent GHG From Ag When It’s Known to Be Above 25 Percent?

Sadly, thanks to Big Ag’s backroom political dealings in Washington, DC, the USDA and U.S. Environmental Protection Agency have agreed on the ludicrous statement that agriculture contributed only about 10 percent of U.S. GHG emissions in 2013, when in fact it was more than 25 percent.

When this erroneous conclusion is corrected and the formerly hidden facts are well understood by policy leaders and the public, we’ll be able to shift policies toward more regenerative, soil-honoring practices and then we’ll see sales of pesticides and chemical fertilizers plummet.

It’s plain to see why Monsanto and friends, via their high-level political appointees, influenced the U.S. and United Nations delegates at COP21. They eliminated agriculture and soils from the COP21 agenda and thus the final agreement—despite overwhelming evidence that soil sequestration (carbon farming) is the number one solution to stop the rise of CO2.

Barker and Pollan describe how “a third of the carbon in the atmosphere today used to be in the soil and modern farming is largely to blame.” They point out that “practices such as the overuse of chemicals, excessive tilling and the use of heavy machinery disturb the soil’s organic matter, exposing carbon molecules to the air, where they combine with oxygen to create carbon dioxide. Put another way: Human activity has turned the living and fertile carbon system in our dirt into a toxic atmospheric gas.”

“It’s possible to halt and even reverse this process,” the writers add, “through better agricultural policies and practices.” They go on to explain how “restoring carbon to the soil is not nearly as complicated as rethinking our transportation systems or replacing coal with renewable energy.”

Ronnie Cummins and Katherine Paul of the Organic Consumers Association pursued this same point in their recent piece How World Leaders Can Solve Global Warming with Regenerative Farming. They describe how the UN Framework Convention on Climate Change (UNFCC) set out to achieve “a legally binding and universal agreement to make sure the Earth doesn’t get warmer than 2C above pre-industrial levels.”

Quoting Cummins and Paul: “To meet that goal, the French government launched the 4/1000 Initiative which, distilled to simplest terms, says this: If, on a global scale, we increase the soil carbon content of the soil by .04 percent each year for the next 25 years, we can draw down a critical mass of excess carbon from the atmosphere and begin to reverse global warming.”

Is the French initiative realistic? Yes, even by conservative estimates.

Industrial, degenerative farming practices—which include tilling, deforestation, wetlands destruction and the use of massive amounts of synthetic and toxic fertilizers and pesticides—have stripped 136 billion tons of carbon out of the soil and sent it up into the atmosphere. Using the French government’s modest estimates, we can transfer, via enhanced plant photosynthesis, 150 billion tons of this carbon back into the soil in the next 25 years.

How do we achieve those numbers? All we have to do is help just 10 percent of the world’s farmers and ranchers adopt regenerative organic agriculture, holistic grazing and land management practices …”

For some reason, Greenpeace, 350.org and the climate movement think putting close to 100 percent of our policy and educational efforts into shutting down oil is our one last hope to stop climate change. This is madness. Can they really believe that fewer people will be driving cars in 2020 than in 2015? And don’t they realize that every new hybrid or 100 percent electric car in its making will contribute as much greenhouse gas emissions as would driving a five-year-old Toyota?

On the brighter side, more and more people are now looking under their feet:

Dispatch From COP21: The Convenient Truth About Soil by Seth Itzkan and Karl Thidemann states: “Ohio State University scientist Rattan Lal refers to soil restoration as ‘low-hanging fruit’ and says it can serve as a bridge to climate safety during the transition to a non-fossil fuel economy. In a 2014 white paper, the Rodale Institute showed that regenerative organic farming could capture carbon dioxide in quantities exceeding global emissions.”

Indeed, soils are the only suitable reservoir for the excess carbon in the atmosphere.

To achieve COP21’s 1.5 degree Celsius target, it’s pretty obvious that we need to lower CO2 back to below 350 ppm. Yet the Paris climate agreement makes it likely it will be more like 425+ ppm in the coming decades. Unless we look to the solution under our feet, we may be reading more stories in the New Yorker such as The Siege of Miami or in National Geographic’s Seafood May Be Gone by 2048, Study Says.

COP21’s plan will lead to 90 percent of the world’s species disappearing by 2060 unless we sequester soil carbon and stop the ocean acidification (caused by excess carbon falling into the seas). As plankton die every year, the planet faces a looming oxygen shortage.

The Surge in Soil Interest Leads to a Tipping Point

Despite industrial ag’s obfuscations, the good news story of soils couldn’t stay hidden. 2015 will be remembered as the year of soil, for it brought numerous articles, videos and public figures speaking out on the timely topic. In California, 900 attendees of a Soil Not Oil conference all helped jump-start this growing movement to reverse climate change via soil sequestration.

And then, of course, there’s the French “4 per 1000″ announcement of a new program for carbon sequestration in agriculture.

“I am stunned,” said Andre Leu, president of IFOAM Organics International, the world’s leading organic farmers and producers association, based in Bonn, Germany. “This is a game changer, because soil carbon is now central to how the world manages climate change. After all the years of advocating for this at UN Climate Change meetings and being the lone voice in the wilderness, it has taken off so quickly and now is global, with numerous countries and key institutions supporting it. However this is true of all tipping points.”

This article has posed some of the hard questions that we all need to be asking. In my forthcoming EcoWatch article in January 2016, I’ll be presenting next steps for implementing the climate solution under our feet.