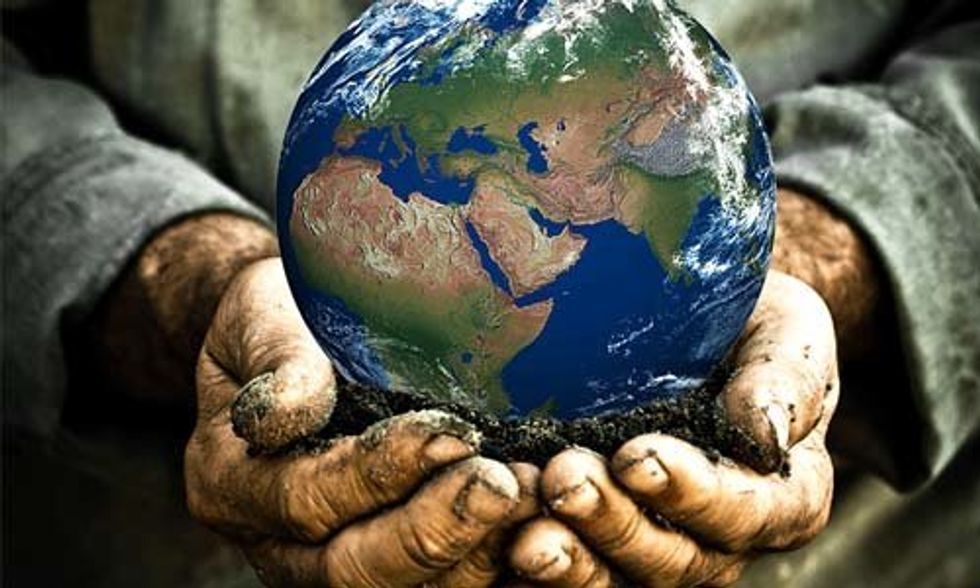 After helping build New Chapter into a leading natural vitamin and supplement company, Tom Newmark decided to take on a bigger challenge: climate change, which is the biggest threat facing the world today. Newmark co-founded The Carbon Underground, a non-profit organization, to help educate the world about the ability of healthy soils to reverse climate change, and to encourage the adoption of regenerative organic agriculture on farms and grasslands to restore a healthy climate.

Research conducted by the Rodale Institute in the U.S., the Research Institute of Organic Agriculture in Switzerland and the Louis Bolk Institute in the Netherlands has found that organic farming methods are effective at removing carbon dioxide (CO2)—the primary greenhouse gas responsible for climate change—from the atmosphere.

We fail to confront the reality that it is the agricultural malpractice of current farming and ranching systems that contribute to more than half of human-caused CO2 emissions. Photo credit: Shutterstock

The Carbon Underground is coordinating global research to demonstrate the potential of sustainable agriculture and land management to sequester carbon and mitigate climate change.

I recently interviewed Tom Newmark, who is also the founder of Sacred Seeds and co-owner of Finca Luna Nueva, a Demeter-certified biodynamic hotel and farm in Costa Rica that is conducting carbon sequestration research.

Q. Tell me more about The Carbon Underground.

A. Larry Kopald and I co-founded The Carbon Underground in 2013. We have a history of involvement in environmental organizations and we’re inspired by the heroic work many NGOs are doing to mitigate our climate crisis. But we were frustrated that most environmentalists don’t discuss a very inconvenient truth: merely reducing the rate of CO2 emissions won’t reverse climate change. The global concentration of carbon dioxide in the atmosphere has already reached 400 parts per million (ppm) and it’s climbing rapidly. Scientists believe that 350 ppm is the “safe” upper limit of CO2 in the earth’s atmosphere.

For the survival of humanity, we’ve got to do more than just slow down the rate of the disaster—we’ve got to reverse it.

Q. What are the sources of CO2?

A. It’s coming from a variety of sources including burning of fossil fuels, such as coal, oil and natural gas and from agriculture. But people don’t focus on agriculture. They say that we need to switch to wind and solar energy. And, of course, we should transition from a fossil fuel-based energy system to clean energy. But we fail to confront the reality that it is the agricultural malpractice of current farming and ranching systems that contribute to more than half of human-caused CO2 emissions. Food and textile production are contributing billions of tons of CO2 each year.

The worst part of the challenge is that if we were to stop all CO2 emissions into the atmosphere—not one new molecule—that won’t do anything to abate the climate crisis. We are already over 400 ppm and we need to get back to 350 ppm. Ideally we would like to get back to the pre-industrial era levels of 275 ppm.

Q. What will be the result of 400 ppm carbon levels in the atmosphere?

A. We are looking at existential threats to the continuity of life as we know it. Ecologists will say that life will get progressively worse, harsh and unfavorable. A two-degree centigrade temperature increase will change life in the oceans as we know it. That amount of extra heat destroys life in the ocean. This will not be the planet that any human has recognized.

Q. What do you see as the solution to this crisis?

A. The only thing we can do and absolutely must do is to take CO2 out of the atmosphere. How do we do that? Some people suggest a machine that could suck out all the CO2. Let’s suppose you could suction 100 billion tons of CO2 from the atmosphere, which is the amount you need to reduce CO2 to 350 ppm. Where would you put 100 billion tons of CO2? Pump it into the ocean or into caves like some reverse fracking? It is magical thinking that technology will save us. Such a machine doesn’t exist and the expense would be unimaginable.

So what will we do? There is a technology that exists today that will suck excess CO2 out of the atmosphere. That technology is called photosynthesis. When I look outside my office window I see plants. Through photosynthesis, plants convert sunlight, CO2 and water to carbohydrates and oxygen. Plants are sucking tens of billions of tons of CO2 and creating plant sugars/carbohydrates. Some plant sugars we eat and some pass through the plant and get converted into humus, soil organic matter. This isn’t rocket science. This is a biological fact.

The soil itself is the largest available sink for CO2. There is more carbon in the soil than in the atmosphere and every blade of grass and tree on the earth.

The bad news is that by ripping up the soil through industrial agriculture abuse, we’ve put excess CO2 into the atmosphere.

The good news is that if we farm and ranch in harmony with carbon cycles, we can put carbon back in the soil—quickly. Scientists say that we can get back to 350 ppm in 10 years. All we have to do is increase soil organic matter in all grasslands on the planet by one percent. That is all we need to do to bring it back to 350 ppm. Nature can fix this problem that humans have created.

Q. What needs to be done?

A. To every environmentalist lamenting that we have 400 ppm, I ask “What is your plan?” It’s not enough to be upset that we have too much CO2. No rational person can disagree that we have a crisis on the planet. Climate change threatens life on the planet as we know it.

We have a plan that is tested and economically feasible. The plan is regenerative agriculture and it is ready to be implemented. It is shovel-ready.

Q. A recent study found that large-scale organic farms actually increased greenhouse gas emissions. What is your reaction to that?

A. At the heart of that paper lays a condemnation of industrial agriculture—monoculture, deep tilling and chemical warfare against soil microorganisms.

The National Organic Program is currently silent on soil health and carbon sequestration. It could have required organic farms to at least preserve or to build soil organic matter—but it didn’t.

Organic agriculture is immeasurably better than its synthetic chemical counterpart, but we now need to push organic growers to adopt regenerative practices.

Q. What about GMO technology?

A. When people debate the GMO [genetically modified organism] issue, saying it is dangerous because of health hazards and glyphosate use, I suggest we also ask “what will it do with respect to saving our planet?” We need to pose the carbon challenge to every agricultural system. What agricultural system best puts CO2 back into the earth? Is it a monoculture where soil is poisoned with pesticides and chemical fertilizers? Or is it biological and regenerative?

GMO technology does more destruction because GMOs are invariably used in the industrial, monoculture environment. We know what the climate will look like with that system. GMO-monoculture agriculture will lead us off the cliff of existence.

I know that regenerative agriculture, whether you call it biodynamic or organic, is incredibly effective at removing CO2 from the atmosphere and making the soil more productive. Organic agriculture feeds the planet with more nourishing food and can sequester the carbon we need.