The Deadly and Costly Realities of Mountaintop Removal 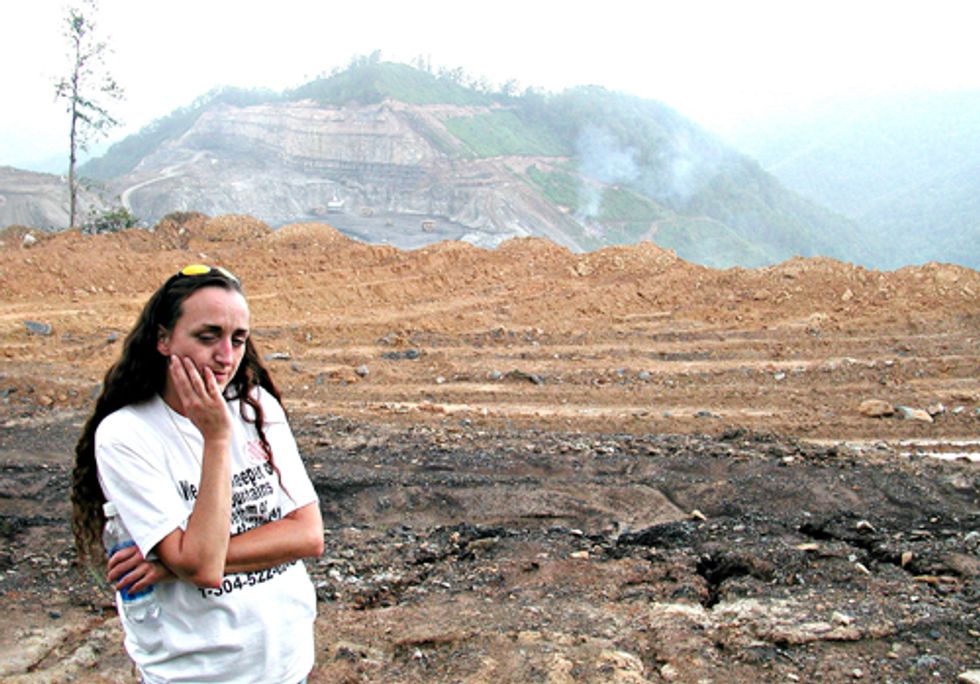 In a heroic effort to overcome the theatrics of a Congressional hearing gone wild on Big Coal slogans and anti-Environmental Protection Agency (EPA) fervor, Goldman Prize-winning activist Maria Gunnoe brought the deadly and costly realities of mountaintop removal mining in the central Appalachian coalfields–and a few moments of sanity–to Washington, DC on June 1.

Testifying at the Subcommittee on Energy and Mineral Resources Oversight Hearing on the “Obama Administration’s Actions Against the Spruce Coal Mine: Canceled Permits, Lawsuits and Lost Jobs,” where wild-eyed accusations and embellished coal statistics by Republican extremists and coal industry sycophants reduced the hearing to the level of a buffoonish county fair tent show, Gunnoe single-handedly pointed out the well-documented health and human crises from mountaintop removal operations and turned the table with her own poignant question: “Why is it acceptable to depopulate our communities and culture, poison our water and air and leave us to die in a post mining waste land for temporary jobs and energy?”

Dispelling the misinformation over so-called lost jobs from environmental regulatory actions, Gunnoe debunked the hearing’s “war on coal” mania with a reality check on the actual lives and livelihoods at stake. “There is a war in Appalachia, do believe this,” Gunnoe told the members of Congress. “This war is not on coal, coal jobs, or the coal industry. This war is on these mountains, our water and the people who depend on it all.”

Here’s Gunnoe’s statement, along with a link to a slide show she entered into the record:

I am Maria Gunnoe from Boone County WV and I (like 100’s of others) help to represent the stories of the Appalachian Communities where coal mining impacts are killing the people and depopulating our mountain culture. Thank each of you for allowing me the opportunity to speak to you. I appreciate your obligations and responsibilities in protecting and serving all US citizens. My hope is that you listen and hear these pleas for our lives from the Southern Mountains of Appalachia where these atrocious mountaintop removal permits are operating.

The Spruce No. 1 permit is in the headwaters of Pigeon Roost creek. This stream and the people of Blair seem unimportant to most people in this room but to me and the people of Blair this stream is a part of our home. When mountaintop removal is permitted near your home, you will soon be forced to leave what is the birthplace of your family and your children’s birthrights as heirs to your family’s land. You are forced (by destruction) to leave the American dream that our forefathers prepared and fought for. Why is it acceptable to depopulate our communities
and culture, poison our water and air and leave us to die in a post mining waste land for temporary jobs and energy? You should ask yourselves: are we knowingly and willingly flipping on our lights and lining our pockets at the expense of the lives, livelihoods and the health of the people in Appalachia? The answer to this in my opinion is YES you are!

Then in 2009, in steps the Obama administration’s EPA trying to fix the problems that the Bush administration created and then ignored. One of the biggest problems was the lack of enforcement of current regulations on mountaintop removal operation in Appalachia. The coal industry was allowed to run out of control in our mountains and depopulate many of our local communities during this rush to get the coal. In response to this insurgence by the coal industry, impacted community members organized to stop the attack of this industry on us in our homes. The EPA heard from us often and we appreciate that they are listening to the science. We have organized meetings with the impacted community members so that the representatives within the government agencies can see and hear the people’s pleas. Still, most of these decision makers walked away thinking that there is some sort of balance to be found in blowing up the mountains over our homes and shoving them into our streams. In reality the fact is mountaintop removal is killing people. These facts are out and available to anyone who wants to see them.

Please understand that the majority of people in Appalachia are against mountaintop removal coal mining. The only ones who support it are the ones who are making money from it. These are the ones that should be made to live in our communities and suffer the consequences of their actions. If you support mountaintop removal and what it is doing to us, you are supporting the murder of the people of the Appalachian culture that depends on these mountains and their waters for our very lives.

The coal industry has said that the EPA and the Obama administration are “trying to shut down coal.” The coal industry is perpetuating a lie that there is a “war on coal” and that coal mining jobs are under attack. This is the same false crisis that is created by this industry every time they don’t get what they want. According to recent reports by Ken Ward of the Charleston Gazette coal mining jobs have increased by 7.4 percent since 2009 when the Obama Administration took office. Ted Boettner with the WV Center for Budget and Policy looked at mining jobs over the last two decades; annual West Virginia coal mining employment was higher in 2011 than at any time over the last 17 years, according to Workforce West Virginia. Quoting the title and text of Daniel Weiss’s article on climateprogress.com “The War on Coal is a Lie Invented by the Coal Industry.” It is a multimillion dollar misinformation campaign funded by big coal polluters to distract Americans from the deadly effects of coals pollution on public health.” Also Ken Ward reported in the Charleston Gazette the coal industries numbers concerning this “war on coal” simply don’t add up. There is a war in Appalachia, do believe this. This war is not on coal, coal jobs, or the coal industry. This war is on these mountains, our water and the people who depend on it all. Coal is not our King, God is! Coal is only the dictator of some.

This committee, Congress, the coal industry and the Obama administration continue to ignore these studies and continue to allow the blowing up of our mountains and poisoning of our waters and air to get to the coal that currently powers about 44 % of America’s electricity.

Expanding any mountaintop removal mining including the Spruce No. 1 permit means the depopulation of yet another mountain community and the sickening of the people who live in these communities.

Living this depopulation has made me more aware of the large-scale impact of this ousting and killing of people on the culture that I love. We will die as a culture as we suffer with the inability to pass this mountain culture on to our children. Not even our historic mountain cemeteries are left intact and accessible. Our people are being mortally impacted by the fallout from mountaintop removal coal mining in our water and air and in our native homes. Do we really need to prove that blowing up mountains over our homes and pushing them into our streams is NOT good for us? It is not as if this Committee, Congress and the coal industry doesn’t know what mountaintop removal does to people. They not only know about it but they are supporting and allowing it and by not ending it. After visiting the central Appalachian communities The UN Women’s Tribunal on climate change jurist recommendations will include that mountaintop removal should be immediately stopped—an immediate moratorium on any mountaintop
removal operations until a full investigation including health related disease incidence rates can be undertaken.

I had hoped that the last time that I came to speak to this committee that someone would have heard our pleas for our lives in Appalachia but our pleas fell on the deaf ears of coal supporters. We had to request that this committee post our comments on their website for others to view days after the industry’s comments were posted. We were timed to the second on our comments, while pro coal supporters were allowed to go minutes over their allotted time to speak. Mountaintop removal cannot be silenced. The more people that are impacted, the more that will continue to stand up to protect all that makes us Appalachians FREE! We will not back down. We know we are doing the right thing in ending this evil that has came in to destroy our very existence. We Appalachians have for many years lobbied the EPA to enforce the laws that are intended to protect our lives in our homes. The coal industry in Appalachia is anti-life and the FIRM enforcement of the laws are the only chance that we have of surviving as a culture after this industry is gone.

Parts of my family first settled this area during the forced removal of the Cherokee known as the “Trail of Tears.” What the coal industry and our government is doing to our native communities in Southern Appalachia feels much like the second silent forced removal of our people.

A few notes from community members:

Selenium discharges downstream from Spruce No 1 are already much higher than EPA standards according to recent water testing. The Spruce 1 permit will allow more selenium to be released into this stream. This is the making for life threatening levels of selenium.

The community of Blair has NO municipal drinking water available to them. The only water in these communities is the well water which in some cases has already been polluted. The community of Blair needs water infrastructure to supply their homes with healthy water before any area permits are even discussed.

From what we see on the ground the coal companies have already moved forward in preparing the permit area as if they had an approved permit. The Spruce permit is in the Coal River watershed. Mountaintop removal is why American Rivers placed the Coal River on our America’s Most Endangered Rivers® list this year–because the river is at a decision point–not because it’s the most polluted. We can save these precious headwater streams that also serve as drinking water to our communities but we must act now before it is too late.