'The Day After Tomorrow' Ice Age Scenario Could Be Possible, Researchers Say 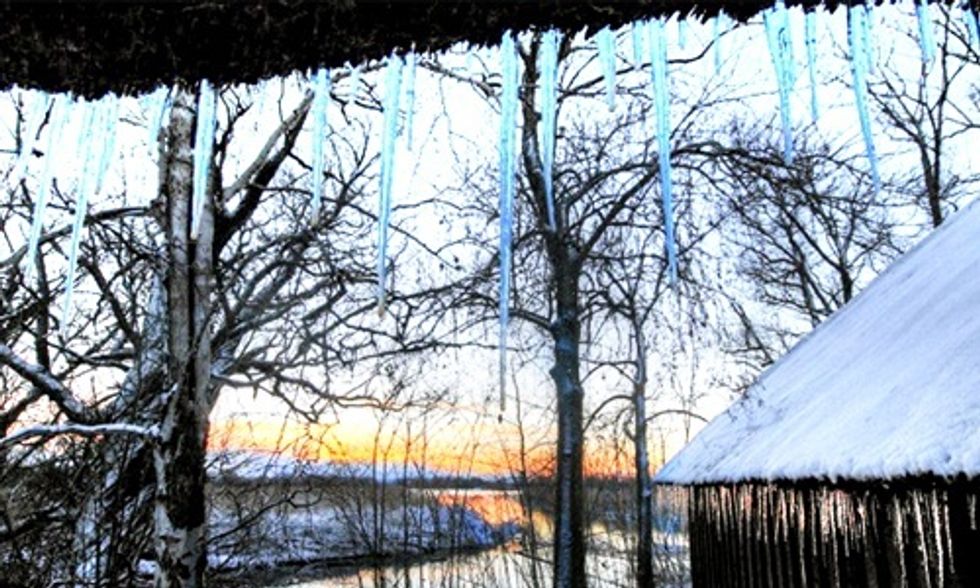 Two separate and very different studies have confirmed a climate paradox—that global warming and a slowdown in the Atlantic Ocean currents could trigger climate change and bring a prolonged chill in Europe.

One researcher argues that not only could it happen, it must have happened every 1,500 years or so during the last Ice Age and that the transitions were complete within one to two centuries.

Another scientist has used the latest climate model to test what would happen if the Atlantic current slowed or collapsed during a period of global warming. He found that for 20 years the planet would cool, rather than continue to warm. And then global warming would resume.

Julia Gottschalk, an Earth scientist at Cambridge University and her colleagues report in Nature Geoscience that they examined links between ocean circulation and alternating cold and warm periods that ended 12,000 years ago—long before human civilization began to increase the carbon dioxide content in the atmosphere and trigger global warming.

The ocean phenomenon in question is known to climate scientists as the Atlantic Meridional Overturning Circulation (AMOC). The Gulf Stream that delivers surface tropic warmth to the North Sea and Scandinavia is part of this global climate machine, also sometimes referred to as the Atlantic Conveyor because it returns cold dense water along the ocean bottom towards the Equator and the Southern Ocean.

By looking at evidence from fossilized plankton and from ice cores, the Cambridge team pieced together a story of alternating Ice Age climate change independent of humans. As sea surfaces got warmer, icebergs broke off the Northern hemisphere ice sheets and large amounts of fresh water entered the oceans.

The circulation slowed rapidly, sea ice formed around Greenland and the northern hemisphere got colder again. The link between sluggish ocean circulation and rapid climate change could be seen, again and again, in the Ice Age sediments. The surprise was the speed at which such changes happened.

At least two studies this year have already raised the possibility of an Atlantic ocean circulation slowdown—driven by global warming—that could have costly consequences for Europe. So confirmation from the past is also important for climate scientists concerned with the future.

“Recent results suggest that the overturning circulation in the Atlantic has faced a slowdown during the last few decades,” Dr. Gottschalk says. “We are only beginning to understand what it would mean for global climate should this trend continue, as predicted by some climate models.”

And at least one climate model makes precisely such a prediction. Sybren Drijfhout, professor in physical oceanography and climate physics at the University of Southampton’s National Oceanography Center, writes in the journal Scientific Reports that he simulated the probability of an abrupt collapse of the AMOC phenomenon, as a consequence of manmade greenhouse warming.

This was the event that triggered climate disaster in the 2004 Hollywood movie The Day After Tomorrow. And although Professor Drijfhout’s paper does not cite the movie, he did use an advanced climate model to test the scientific premise on which the film was based.

He reports that the simulations show that if global warming and a collapse of AMOC occur simultaneously, the planet may cool, rather than warm, for about 20 years. Thereafter, global warming will resume as if AMOC had never collapsed. Within 40 years, the Earth would be warming at present rates.

This cooling is unlikely to involve the sudden, catastrophic glaciation in Europe and North America that provided part of the Hollywood spectacle. But it could certainly affect local European temperatures for a few decades.

“Near the eastern boundary of the North Atlantic (including the British Isles), it takes more than a century before temperature is back to normal,” Professor Drijfhout says.

The Nation
Insights + Opinion
Four more years will be enough to cement in place Trump's anti-environmental policies and to make sure it's too late to really change course. Enrique Meseguer / Pixabay

To understand the planetary importance of this autumn's presidential election, check the calendar. Voting ends on November 3—and by a fluke of timing, on the morning of November 4 the United States is scheduled to pull out of the Paris Agreement.

President Trump announced that we would abrogate our Paris commitments during a Rose Garden speech in 2017. But under the terms of the accords, it takes three years to formalize the withdrawal. So on Election Day it won't be just Americans watching: The people of the world will see whether the country that has poured more carbon into the atmosphere than any other over the course of history will become the only country that refuses to cooperate in the one international effort to do something about the climate crisis.

The Guardian
Politics
A woman marks down her vote on a ballot for the Democratic presidential primary election at a polling place on Super Tuesday, March 3, 2020 in Herndon, Virginia. Samuel Corum / Getty Images

The climate crisis is set to be a significant factor in a U.S. presidential election for the first time, with new polling showing a clear majority of American voters want decisive action to deal with the threats posed by global heating.

America's largest national forest, Tongass National Forest in Alaska, will be opened up to logging and road construction after the Trump administration finalizes its plans to open up the forest on Friday, according to The New York Times.

By Ruby Russell and Ajit Niranjan